There are nine historically black colleges and universities in Texas. One of them calls Austin home. 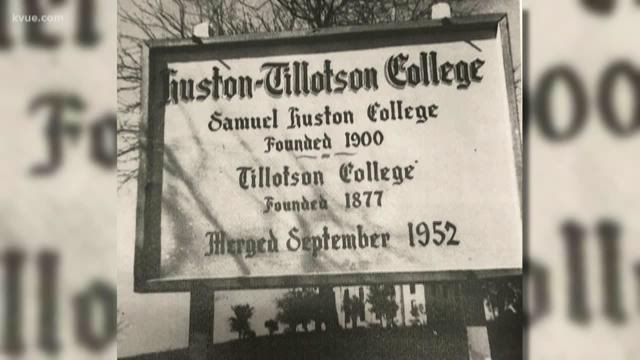 One of the most important building blocks of Austin's African-American community isn't a person, but a place.

Without it, tens of thousands would have missed out on the opportunity to make their scholastic dreams come true.

There are nine historically black colleges and universities in Texas. One of them calls Austin home.

Students ready to go to the next level of their education spend an afternoon at the Carver Museum to see if a historically black college or university (HBCU) is in their future.

HBCUs from across the country are represented, including Austin's own Huston-Tillotson University.

There were few colleges dedicated to educating African-Americans before the Civil War. The roots of Tillotson College date back to 1875. The school began classes in 1881.

Samuel Huston College was founded in 1876, moving from Dallas to Austin in 1878.

"We combined in 1952 to become one, Huston-Tillotson University," said Huston-Tillotson Chief of Staff Wayne Knox. "For generations now, HBCUs have provided the researchers, the scientists, the educators, the business moguls, to ensure society has a fair and equitable level of skill sets if you will."

Each year, Huston-Tillotson generates $47 million in economic impact for the local and regional economy, and provides close to 500 jobs.

Its past is evident across the campus in its well-maintained buildings, the pride of the students and the photos of the leaders who helped guide the school through the smooth and rough waters of history.

Huston-Tillotson College was the only provider of higher education for African-Americans in Central Texas until Brown v. Board of Education in 1954, when desegregation was launched.

Today, more than 1,000 students of all races attend Huston-Tillotson and the school continues to turn out notable alumni who went on to change the face of our nation.

Ladrea Smith, 18, plans to be one of those who make their mark.

"I love Huston-Tillotson University," she said.

The biology major said she chose Huston-Tillotson over other colleges because for her, it truly feels like a family.

"African-American students and everyone else are allowed to be themselves, it's diversified here," Smith said. "The faculty and staff -- they're here to help us grow and they want to see us succeed because that leads to the development of the black community."

As part of Black History Month, KVUE is digging deeper into the culture of Austin's African-American history. Part of KVUE's mission this February is to recognize and spotlight the accomplishments of African-Americans in and around our city, both from the past and the present.