After an hours-long discussion at a Thursday meeting, city council took action regarding the homeless ordinance. 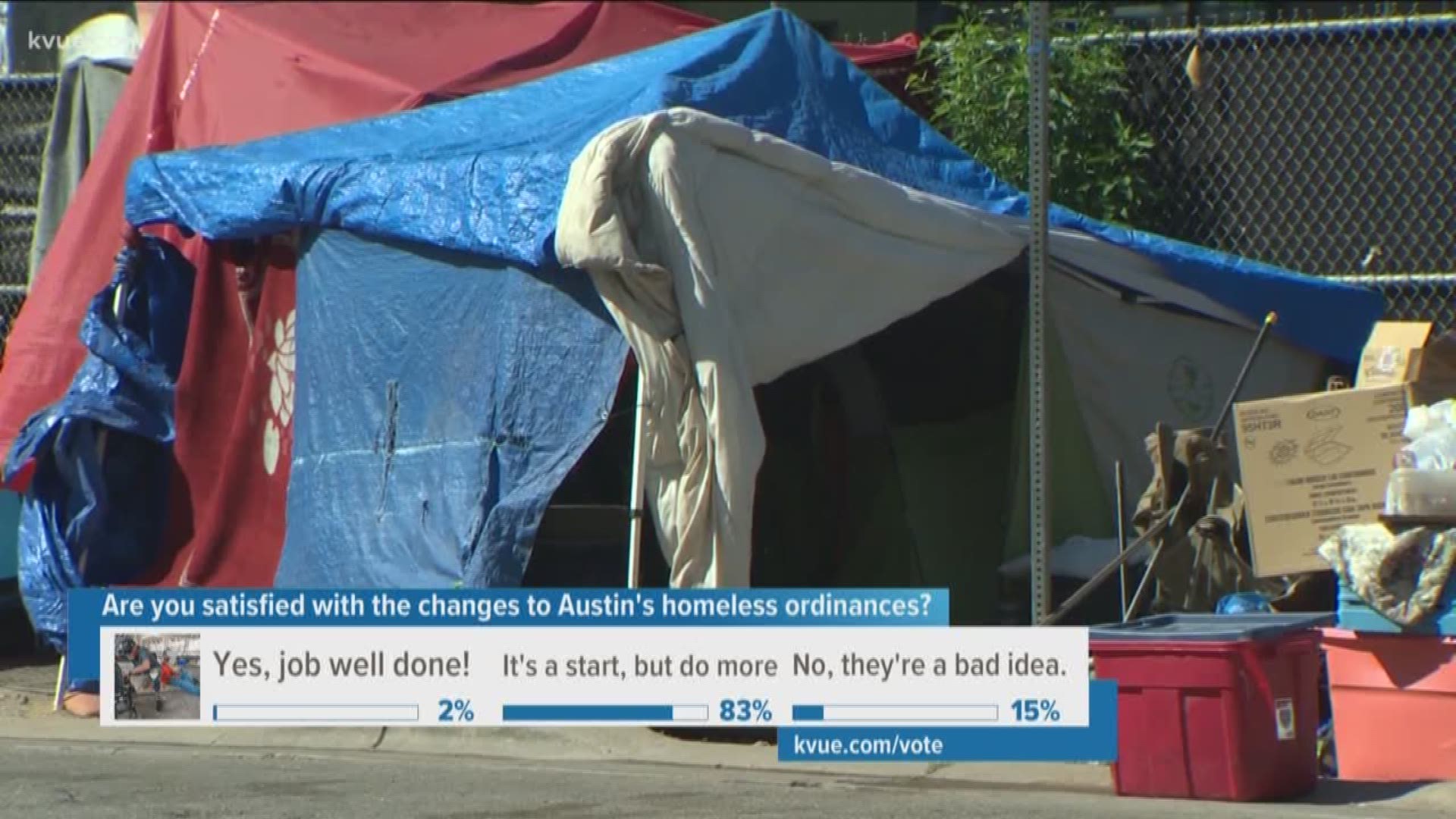 The council voted 7-4, with councilmembers Ann Kitchen, Kathie Tovo, Leslie Pool and Alison Alter voting against the ordinance after it was substituted and amended. Kitchen said "there is a need for more specificity."

Here's what was added to the ordinance:

Noticeably not on the list was a ban on camping underneath overpasses.

"I am most disappointed that that area was not included," said Kitchen. "Like Councilmember Pool said, if someone is camping there at night or at anytime where you don't have an officer right there saying, 'This is not a safe place,' or a sign that this is not a safe place, then we're leaving people at risk."

"I don't regret the changes we made to the ordinances in June because I think we're closer now to ending homelessness than we have ever been before," said Adler. "That said, there were things that happened as a result of what we did in June that I did not anticipate or expect in the way that they have happened."

Adler said he didn't expect "as many people to come out of the woods and out of the dark spaces as has happened."

"And in retrospect, had I known there were going to be that many people coming out, I think I probably would have insisted that we had more beds standing by," said Adler.

Both Kitchen and Adler said they wanted to move past the ordinance talk and start looking toward solutions.

"I am pivoting full tilt boogie to actually solving the challenge we have, ending homelessness," said Adler.

“By reforming its homelessness policy, the city of Austin has taken a meaningful step to address the safety and health of Texans – including the homeless. The state will monitor how well the new policy actually reduces the skyrocketing complaints about attacks by the homeless and other public safety concerns. The state will also continue to monitor water quality for E. coli and other bacteria.

“Additionally, to ensure the safety of both the homeless and fellow Texans, the Texas Department of Transportation will advance strategies to clear homeless encampments under bridges, and the Texas Department of Public Safety will work with Austin APD, the University of Texas and all state-related facilities to ensure safety and security. To help achieve best results, the governor is also working with homeless shelters in and around Austin.”

This statement comes after Gov. Greg Abbott's Nov. 1 deadline he gave to the city to "demonstrate consequential improvement in the Austin homelessness crisis" before the state steps in.

"The Austin Police Department remains committed to working with the city council, fellow city departments, social service groups, those experiencing homelessness and others as we strive to end homelessness in our community. We will update our training bulletins and direction to officers to reflect the additional enforcement authorities contained in the updated ordinance."

Manley said in a press conference earlier that he requested council to reinstate the old ordinances until there is a solution.

"On one hand, it does provide for a lessened density on the outside; on the other hand, we’re all concerned about where people can be and where they are going," said McCormack. "So we have to continue focusing our resources, making sure that every individual situation is addressed."

He said there are around 100 to 150 people outside the ARCH on any given night.

McCormack said Front Steps is working with other organizations to help get people the resources they need.

Bill Brice, with the Downtown Austin Alliance, said he was also pleased with council's revisions to the ordinance, calling it a "positive step forward."

He said he's hopeful the change, which he says adds restrictions and clarity, will "help restore public order downtown."

Kellogg's creates 'All Together Cereal' to support LGBTQ anti-bullying campaign