Have you noticed more homeless camps in Austin? You're not the only one

KVUE viewers asked why they've noticed more camp sites in Austin. Turns out, there could be a few reasons why. 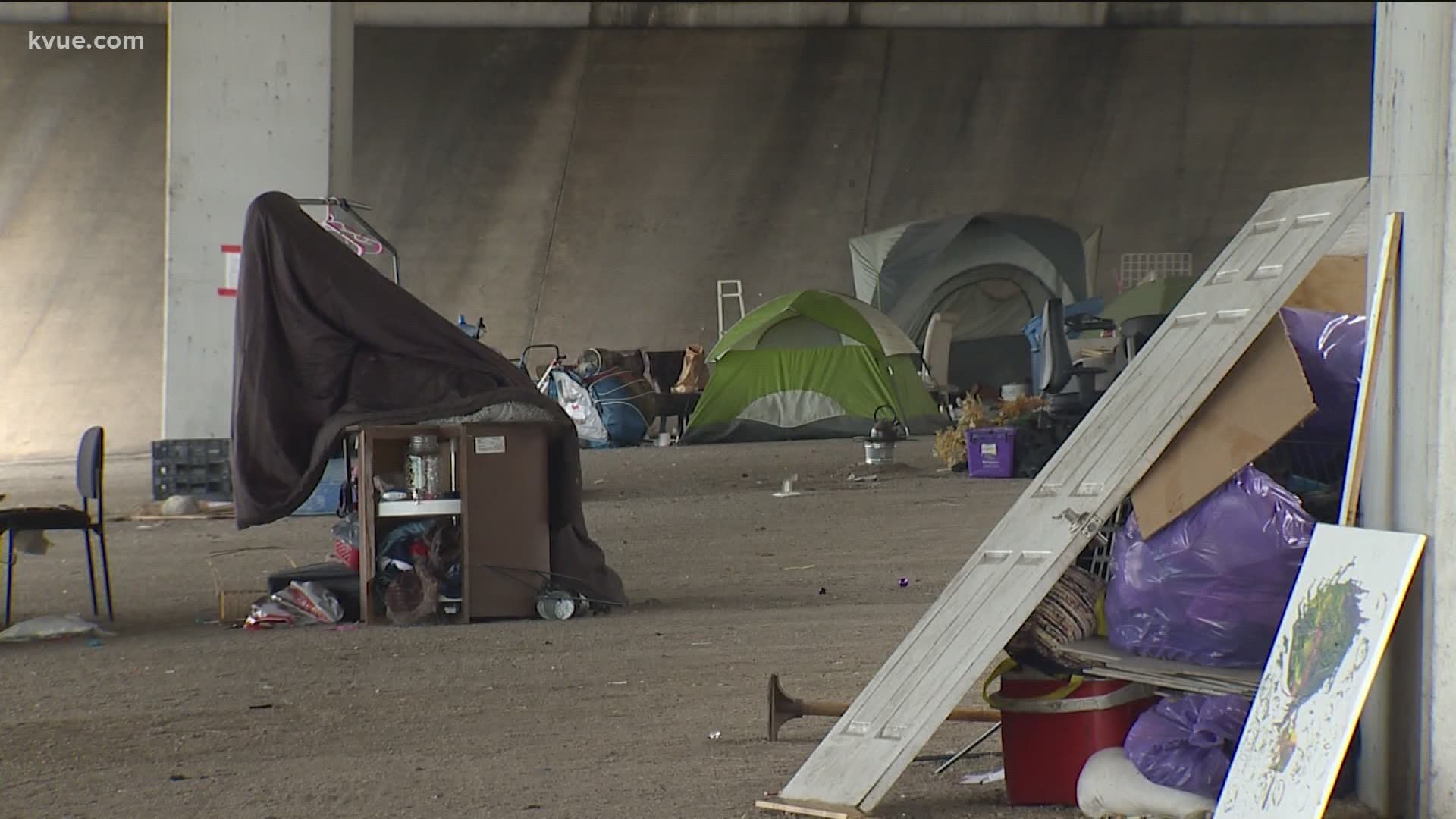 AUSTIN, Texas — When you drive by overpasses, seeing tents, shopping carts and people is not unheard of. However, it was a lot more common before the Texas Department of Transportation (TxDOT) started cleaning up underneath some of the overpasses in the area.

TxDOT says the clean-ups stopped at the beginning of the pandemic out of concern for the health and safety of everyone involved.

"I’ve seen new campsites where I’ve never seen them along 183 and other places, so I think it’s just a feeling that you can be out with just not as many people out," said Greg McCormack, the executive director of Front Steps.

Front Steps, located in Downtown Austin, provides shelter and services to the homeless. It's right up the road from I-35 and 7th Street, a place where homeless have camped before.

How to find a food bank in your area

"You can see it's grown considerably," said McCormack, referring to the number of people camping at 7th St. and I-35. "And I think you can contribute that partly to there's no traffic in that area, so where that used to have all parking filled up, there was a big need to have that cleared out and safe for all the people that are parking there, that doesn't exist anymore so there is probably two to three times the individuals."

McCormack explained that another reason for an increase in campsites could be that high traffic areas that may not have been conducive to camping are now low traffic, giving people an opportunity to set up camp.

He also said he wondered if there were new homeless people in Austin, explaining someone who had just become homeless would likely choose a place to camp that's very much in the public eye.

"I think there's a feeling of safety if you're camping in a very public area and right now, in this atmosphere, there's probably not a lot of enforcement around denying that," McCormack said.

McCormack said he has not noticed as many people downtown, but he thinks that is because the restaurants were closed for a bit.

Front Steps has also had to put some things on pause. The service provider is still offering emergency shelter to around 50 people. Typically, Front Steps takes in about 130, but, with social distancing guidelines, it has had to decrease the number of people staying there.

It's also had temporarily stop access to the day resource center where people could come in and use the facilities and get out of the elements for a bit.

Additionally, outreach through the guided path initiative, which aims to connect people who are homeless to service providers, is temporarily stopped. However, 32 of the 99 individuals that were part of the pilot program have been housed. McCormack called this "a big win".

"It feels like things are just kind of on hold to get through this, and then when we come out the other side, I think there are some things we're going to have to deal with," said McCormack.

KVUE reached out to the Austin Police Department for information about the enforcement of homeless ordinances during the pandemic. It sent this statement:

Austin Police continue to ensure the safety of our entire community, including those who are experiencing homelessness, even as we go through the COVID-19 pandemic. If there are reports of criminal activity, officers are responding and taking any appropriate action, including enforcement action when necessary. APD is also working through the Emergency Operations Center with the COA Parks and Recreation Dept, Austin Public Health and the Office of the Medical Director to ensure that all necessary safety protocols for the public and our first responders are followed, and we’re keeping everyone as safe as possible. In terms of city ordinance violations, officers have largely been able to gain compliance through education and voluntary measures, without having to issue citations. If an encampment pops up that is in violation of any city ordinances, officers work with the individuals experiencing homelessness to relocate, to ensure their safety and the safety of the general public.

KVUE also reached out to the city and the Mayor's office with questions. We have not received answers at this time.

WATCH: Coronavirus in Texas: Resources for getting back to work