Bastrop County ministry, homeless shelter get a big upgrade and continue to grow

In The Streets, Hands Up High Ministry in Bastrop completed new homes this year for disabled veterans. It's now working to build a transitional housing facility. 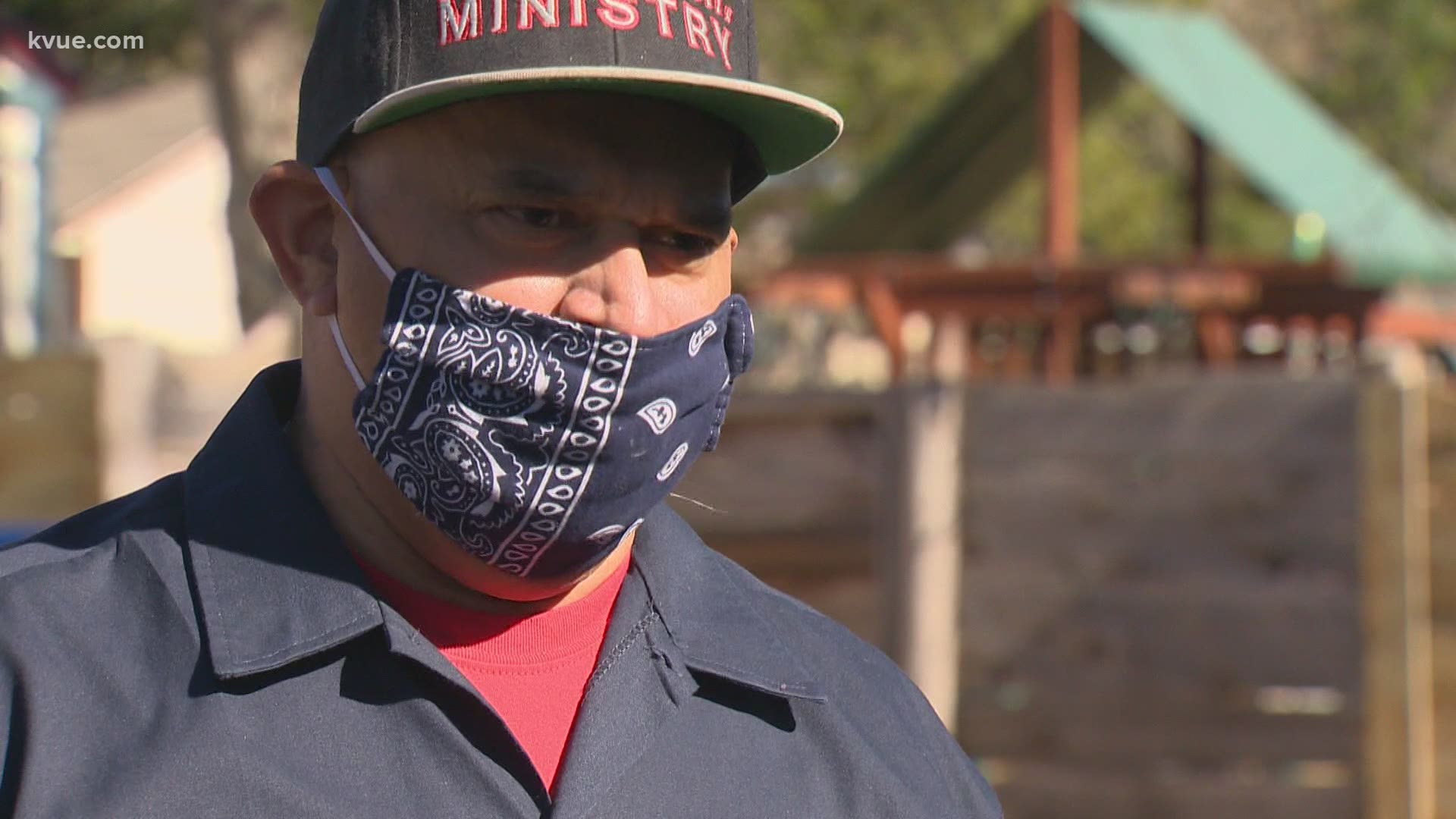 BASTROP COUNTY, Texas — When Pastor Roland Nava got out of prison in 2007, he had nowhere to go.

"I was homeless in Houston for three-and-a-half years," Nava said. "The whole change happened inside while I was incarcerated, and that's where the Lord took my heart to help people instead of hurt people."

So he started In The Streets, Hands Up High Ministry, moving it to Bastrop County in 2013, where he has helped hundreds of people get food or back on their feet ever since.

"I was homeless. I was hungry. I was in addiction. And all these things just is what we do here now. Everything that I went through, I see that it was for a purpose, for me to to have a heart and compassion for those people that are going through those things today. And so that's why we do what we do," Nava said.

As the ministry grew, so did the demand, but the pandemic and funding issues hindered the facility's growth.

But thanks to generous donations, the ministry completed new homes this year for disabled veterans. But Nava isn't done yet and is now working to build a transitional housing facility.

To donate to their efforts and help them expand, click here.

What the ministry does

In The Streets, Hands Up High Ministry is a soup kitchen, which set up shop just north of downtown Bastrop on Highway 95 in 2013 and has continued to grow.

By 2019, the shelter had partnered with the Capital Area Rural Transportation System (CARTS) to add a stop at the ministry.

The soup kitchen, which is in a larger separate building from the family homeless shelters, serves more than 100 people every day, according to Nava. Due to the pandemic, they've been delivering the meals to those in need to prevent crowding indoors – it also acts as a drive-thru.

Right now, there are eight Safe Acre Family Environment (SAFE) shelters set up in a neighborhood-like style, with quaint sidewalks separating each unit, washrooms for separate genders and a laundry machine unit all on site. Each shelter is sponsored by a local business.

To date, Pastor Nava estimates they've helped somewhere between 50 and 65 families transition out of homelessness through their housing program.

During the holidays, the ministry wraps hundreds of presents and provides hundreds of bags of groceries to those in need.

Over the years, Nava believes there has been an increase in people experiencing homelessness making their way out to the rural Central Texas county. The pandemic didn't help.

"In August it started getting bigger because of the COVID. There were more families losing jobs that were being displaced for other reasons," Nava said. "There are people coming in from Austin ... people from Houston, from San Antonio. We even got families right now that are from Oklahoma that are here in the shelters right now. And right now we are at capacity."

As of Christmas Eve, Nava said they have just one more shelter available at the moment.

At the start of 2020, the City of Bastrop was looking into more solutions for homelessness.

"There also is a big demand for low-income living other than the housing authorities that we have," Nava said. "There's a lot of people who are falling through the gap, you know, because ... not everybody is on drugs and alcohol. Not everybody ... has other things going on. Some just need a help, a hand for a couple of months or something to get up on their feet," Nava said.

KVUE previously reported the ministry bought land next to the eight shelters in order to expand. The original expected completion date was September of 2019. The pandemic, coupled with funding issues, delayed the project for months.

But after generous donations, the ministry was able to get its several homes up and running by mid-2020 and already has several people staying in them.

The focus for the homes was disabled veterans.

There are two bright blue shelters for veterans. Each one is for a single person. Inside, there's a bed, dresser, bathroom, microwave, refrigerator and more.

The veterans can stay there for up to six months at no cost, and if they choose to stay longer, they can work with Pastor Nava on that.

There are also several full-sized trailers for disabled veterans with families, which include a ramp in case one needs to use a wheelchair.

Additionally, the ministry recently built a church, which also acts as a weather shelter for when temperatures get down to freezing or get above 100 degrees.

Now, the ministry is working to buy 5 acres of land behind the existing property, in order to build.

"Bastrop County needs to have some kind of transitional living, even if it's a short time, to get somebody up on their feet for a month, you know, and so that's what we're trying to do right now," Nava said. "There are a lot coming from the metropolitan cities out to the world cities."

1 / 6
Jackson Grimm
Inside of one of the disabled veteran shelters for a single person.

Coronavirus updates in Central Texas: What to know on Christmas Eve