The City released a four-phased approach to reinstating the camping ban. 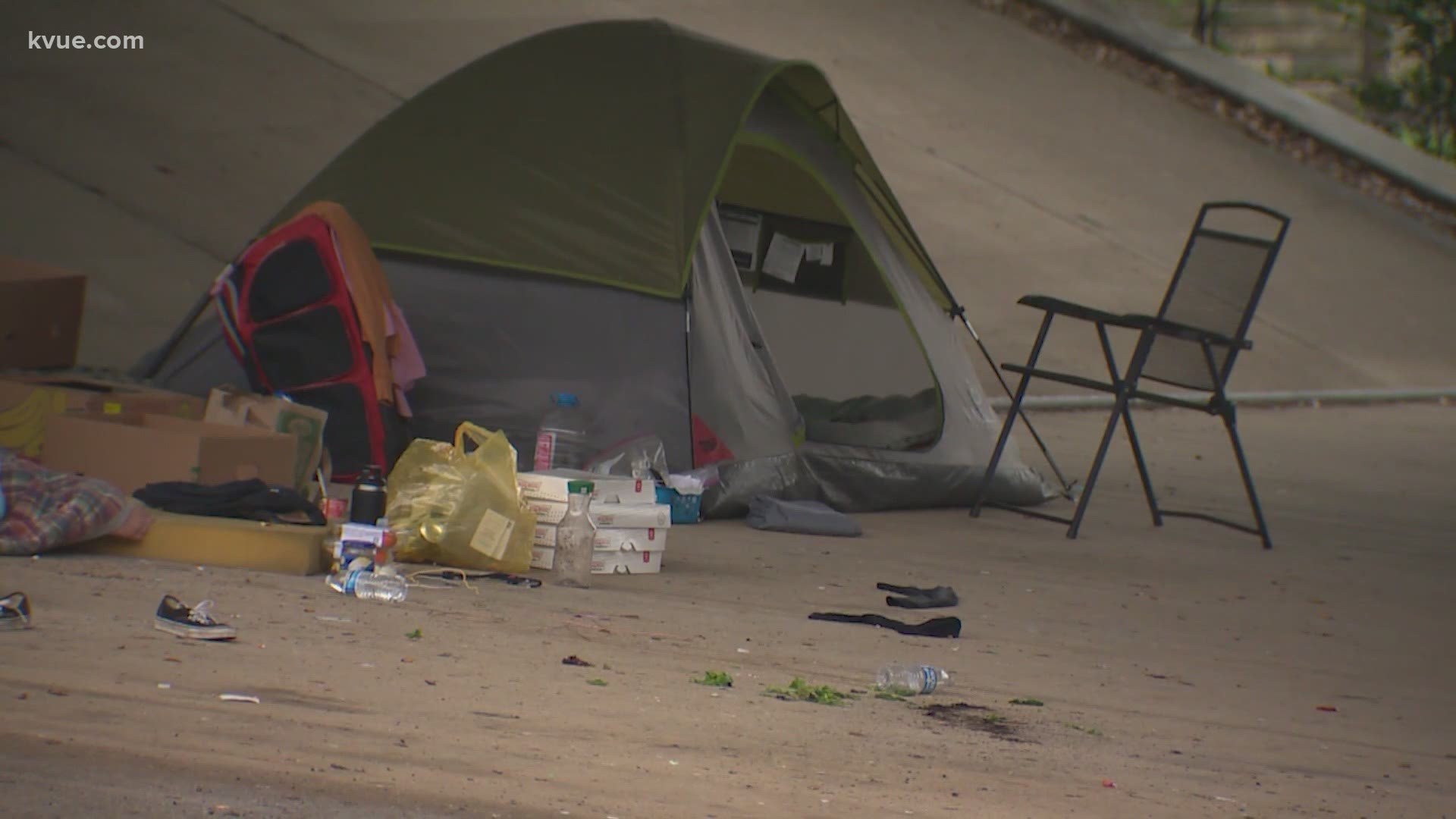 AUSTIN, Texas — On Tuesday, the voter-approved public camping ban is set to take effect in Austin.

Voters approved Proposition B in this month's election. It bans people from camping in public areas that aren't designated by the Parks and Recreation Department; sitting or lying on public sidewalks in and near downtown and the University of Texas campus; and panhandling at specific hours and locations.

One of the biggest questions surrounding this camping ban is how it will be enforced. On Monday morning, Austin Mayor Steve Adler said he expected City Manager Spencer Cronk to release more details about enforcement plans in the coming days.

"We expect the tents to go away. We expect the city to be clean and safe for everyone again. We know that won't happen immediately overnight. We do believe there needs to be an education campaign and a transition so that people who are experiencing homelessness can prepare for where they go next. But it's time for the City to finally get serious about homelessness," said Matt Mackowiak, co-founder of Save Austin Now.

WATCH: City gives update on how Prop B will be implemented

When KVUE spoke with Mackowiak, the City's plans had not yet been released.

"We are going to be watching very carefully to ensure this gets fully enforced with urgency and focus and determination on behalf of the City. And if it isn't, trust me, you will hear from us very quickly," Mackowiak said.

On Monday afternoon, the City released a "phased plan" for enforcing the ban. The plan has been developed through a coordinated effort among multiple departments including the Austin Police Department (APD), the Homeless Strategy Division, the Homeless Outreach Street Team, the Downtown Austin Community Court, the Parks and Recreation Department, Austin Resource Recovery and others, according to the City.

CAMPING BAN UPDATE: We JUST learned what implementation will look with the camping ban in Austin tomorrow. It says it will extend over several weeks.

Details in the photo, and we'll have more on @KVUE at 5 and 6pm and on https://t.co/SrNsNdbEWs. pic.twitter.com/WYq5HvNktt

The City said in the release that Austinites should know that it will take several weeks for this plan to be implemented. Here's a breakdown of the four phases:

Phase one begins on May 11 and will entail a month's worth of "community engagement and education." The City said that during this period, the APD will provide available resources and verbal warnings, except in the case of imminent threats to health or safety.

After Phase One is completed, the City will move into Phase Two, another 30-day period where the APD will be instructed to issue written warnings and initial citations.

After 60 days removed from May 11, Phase Three will begin, where the APD may "initiate arrests and/or encampment clearances in situations where compliance has not been achieved after a citation has been issued."

There was no timetable given for the time period between Phase Three and Phase Four, but the City said in this stage that citations and arrests will continue as necessary and the APD will "coordinate with City homelessness outreach teams, and, wherever possible, will provide information about alternative options such as storing personal items, alternate campsites, available shelter, and other resources."

In the press conference, Cronk said it's an all-hands-on-deck effort with a focus on keeping things safe and humane. He said to expect this process to extend over several weeks and added that outreach and education will be emphasized.

"As we all know, the issue of homelessness is complex. There are no simple or perfect solutions," Cronk said.

APD Interim Chief Joe Chacon also spoke in the Tuesday press conference. Chacon said the concentration will be on areas that pose a greater danger to the community or the encampment itself (i.e.: areas prone to flooding/wildfire, history of violence, etc.). Chacon said the APD will work with the HOST team.

"There will be a period of time to educate the public," said Chacon.

RELATED: What guidance are Austin officers getting in enforcing the camping ban?

The City's Homeless Strategy Officer, Dianna Grey, was third to speak Tuesday. She said there will be storage access for people moved and added that Austin Resource Recovery, Public Works and other departments will continue scheduled cleanings.

Grey said shelters are still running at reduced capacity due to COVID-19. She said, even at full capacity, shelters could not hold all of Austin's homeless population. According to Grey, the primary goal is to help people get out of homelessness and provide housing and services people need.

Grey said that when an encampment needs to be relocated, outreach partners will go to the camp several times so the people being told to relocate understand the process, give them storage options, and connect them to services. After that, there is a 72-hour notice posted.

"We all are doing everything we can to make sure this is implemented in a safe and humane way," Cronk said.

“It is clear from the May 1 election results, no one wants to see Austin residents struggling with unsheltered homelessness in tents. The city manager is trying to find a way to enforce Proposition B while humanely addressing the challenges experienced by unsheltered residents. We await the city manager’s assessment of a temporary camping strategy next week. We continue our collaborative work with the Summit to Address Unsheltered Homelessness to create more housing solutions to achieve the goal of providing supportive housing for 3,000 individuals in the next three years. Even short-term solutions still require permanent supportive housing and access to services to help individuals break free of homelessness.”

Meanwhile, Save Austin Now, the group behind Proposition B, released the following statement Tuesday afternoon:

"It took just ten days to enforce the ridiculous public camping ordinance that took effect July 1, 2019. Why does full enforcement of the public camping ban require 60 days? The camping ban was in effect for 23 years; it should not require 60 days to put it back in place and restore public safety and public health to our city. Residents, small business owners, visitors, and Austinites who visit our city parks should not have to wait two more months before this public camping disaster is fixed once and for all. The will of the voters was clear. Nearly 91,000 Austinites voted to reinstate the public camping ban, over the strenuous opposition of the Mayor and nine of ten City Council members. We want the homeless to be in safe and sheltered locations so they can receive services. This wasn’t happening under the public camping ordinance. The city has had two years to address this problem and all they have done is make it worse, while wasting $161 million with almost no new homeless housing to show for it. Disrespecting the will of the voters in this way is a ‘slap in the face’ of the nearly 91,000 Austinites who demand their city become safe and clean again for everyone.:

For several days, protesters have been camping outside Austin City Hall ahead of the planned reinstatement of the ban. On Sunday night, they held a protest to show city leaders they stand in solidarity with people experiencing homelessness. More protesters were also spotted Monday morning.

"We are here occupying because this is not OK. Like, we need to bring awareness that the solution needs to be found. Do not criminalize people until a solution is found,” said one protester who goes by the name of Smoky Quartz.