In July, Austin City Council lifted its ban on sitting, lying or camping in public. 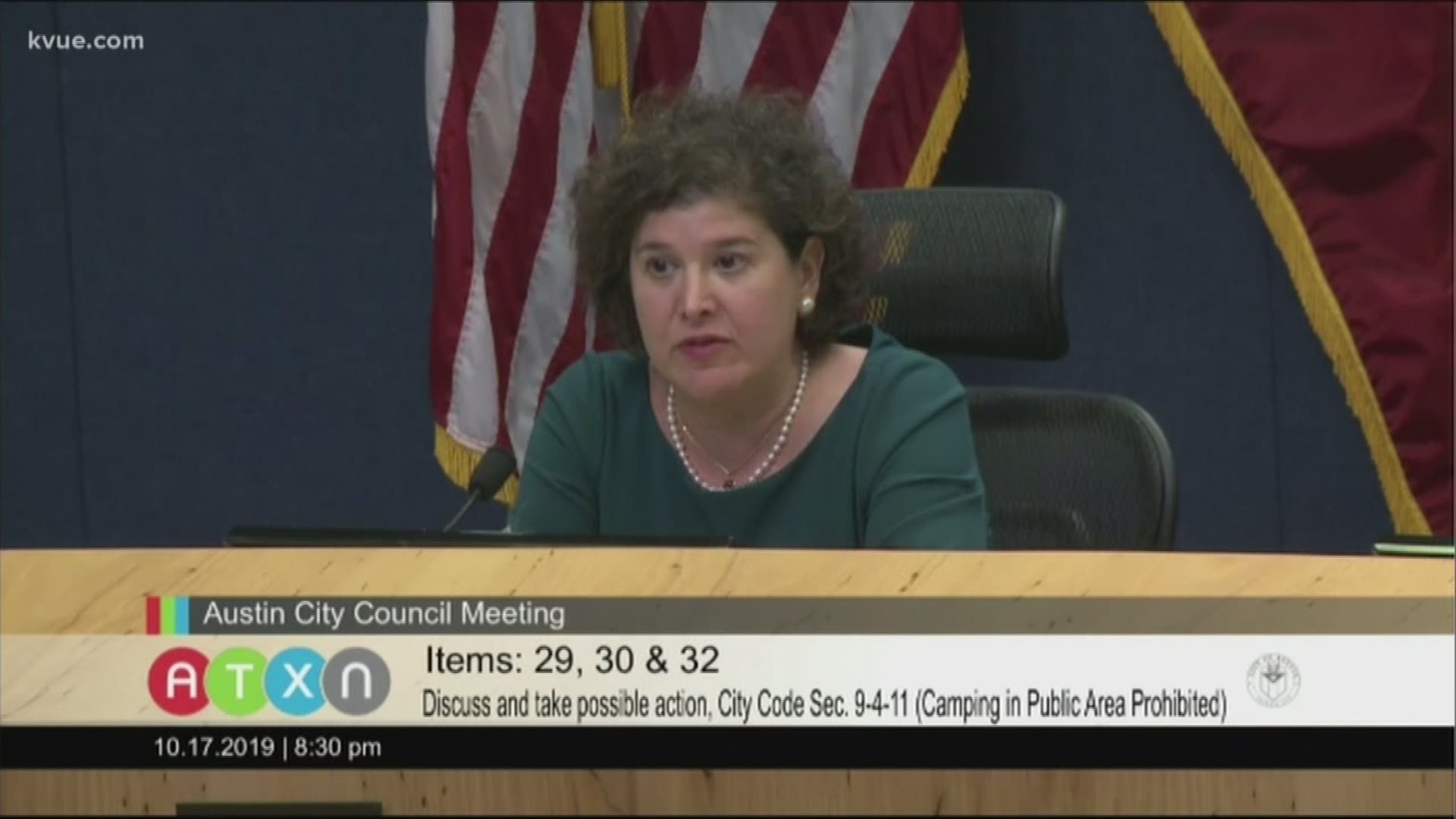 AUSTIN, Texas — After the Austin City Council voted to lift a ban on homeless camping, sitting and lying, city leaders have decided to make some changes at a council meeting Oct. 17.

The changes mean camping on all city sidewalks will be banned, but sitting and lying down will not – unless it is 15 feet from an operating business. Camping, sitting or lying downtown around the ARCH will be banned, within a quarter mile of the area. That rule will eventually apply to the South Austin homeless shelter when it is built.

Camping, sitting and lying will also be banned in high wildfire risk zones, which is 14% of the city, or if it is endangering the health or safety of the public. It was approved by a 7-4 vote.

The four nays were Kathie Tovo, Leslie Pool, Ann Kitchen and Alison Alter, who supported a more specific plan that would add bans in more areas and make the ordinance clearer for enforcement.

Underpasses were not addressed in the changes on Thursday.

Thursday's amendments are essentially a modified version of the June changes.

Austin Police Chief Brian Manley released the following statement on Friday: "The Austin Police Department remains committed to working with the city council, fellow city departments, social service groups, those experiencing homelessness and others as we strive to end homelessness in our community. We will update our training bulletins and direction to officers to reflect the additional enforcement authorities contained in the updated ordinance."

The changes will go into effect in 10 days.

There were three separate ordinances councilmembers considered before heading into the meeting:

The original draft would have banned camping in areas like medians, high fire or flood risk areas and under highway underpasses. It also contained a list of specific streets where camping would be prohibited.

A revision to this draft was released Wednesday afternoon and Kitchen told KVUE over the phone the changes would not include specific streets.

Instead, camping, sitting or lying would not be permitted within 15 feet of the entrance or exit of businesses or residences, compared to the six feet of space required by the original draft.

Adler's proposal was less specific about certain areas where camping, sitting or lying would be prohibited. Adler's office told KVUE the broader language would leave enforcement up to Austin police officers.

The draft ordinance outlines an offense as if the person is camping and it "intentionally, knowingly or recklessly rendering impassable or impending the reasonable use of a public area making usage of such area unreasonably inconvenient or hazardous."

Kitchen said the lack of specifics in Adler's plan was concerning.

Garza released a heavily edited version of Adler's draft, which included prohibitions on camping in specific locations and areas. It also included the part of Kitchen's proposal that did not allow camping within 15 feet of a door to a residence or business, which ultimately made its way into Thursday's changes.

Garza said on Tuesday she would not support the Kitchen proposal.

This comes months after the city council voted to reverse its ban on camping, sitting and lying.

On July 1, Austin police began enforcing the city's new homeless ordinance, which ruled that it was legal to sit, lie or camp in public. Officers were told to only give tickets to people who block pathways. City council also changed another part of the ordinance that only made it illegal to panhandle if someone was being aggressive.

That move proved to be controversial.

“While the action today did achieve clarity in a few instances, we still believe there is need for more specificity," said Councilnember Kitchen. “I am disappointed that council declined to clearly state in the law that areas like medians under our South Austin highways pose risks for our homeless neighbors. It’s time now to move forward and focus on the fundamental need to help our homeless neighbors find homes.”

“While I am disappointed that a majority of my colleagues would not join us in advancing most of the measures that we brought forward, believe that we as a council and a community can learn from this experience – and grow from it," said Councilmember Tovo. “My dedication to providing a safe and stable home for all those experiencing homelessness is unwavering, and I remain fiercely committed to effectively ending homelessness in our community.”

“This latest challenge to our community will take time to resolve, given the complex and multi-layered circumstances of each individual’s reasons for living without shelter,” Councilmember Pool said. “It is unfortunate that we are still without clear health and safety protections for people sleeping outdoors, however, I promise to continue working on this most critical issue.”

“The majority of people in our city do not believe it is mutually exclusive to be compassionate towards residents, including those experiencing homelessness, and also be responsive to those expressing their desire to ensure public health and order,” said Councilmember Alison Alter. “It remains our duty as council members and Austinites to continue our efforts to help those experiencing homelessness and restore the community’s sense of public health and order.”

Kitchen, Tovo, Pool and Alter said they hope that, moving forward, "the community will reach beyond divisiveness and refocus the discussion on solutions for the shared goal of ensuring that every neighbor has a safe and stable place to call home."

“By reforming its homelessness policy, the city of Austin has taken a meaningful step to address the safety and health of Texans – including the homeless. The state will monitor how well the new policy actually reduces the skyrocketing complaints about attacks by the homeless and other public safety concerns. The state will also continue to monitor water quality for e-coli and other bacteria.

Additionally, to ensure the safety of both the homeless and fellow Texans, the Texas Department of Transportation will advance strategies to clear homeless encampments under bridges, and the Texas Department of Public Safety will work with Austin PD, the University of Texas and all state-related facilities to ensure safety and security. To help achieve best results, the governor is also working with homeless shelters in and around Austin.”