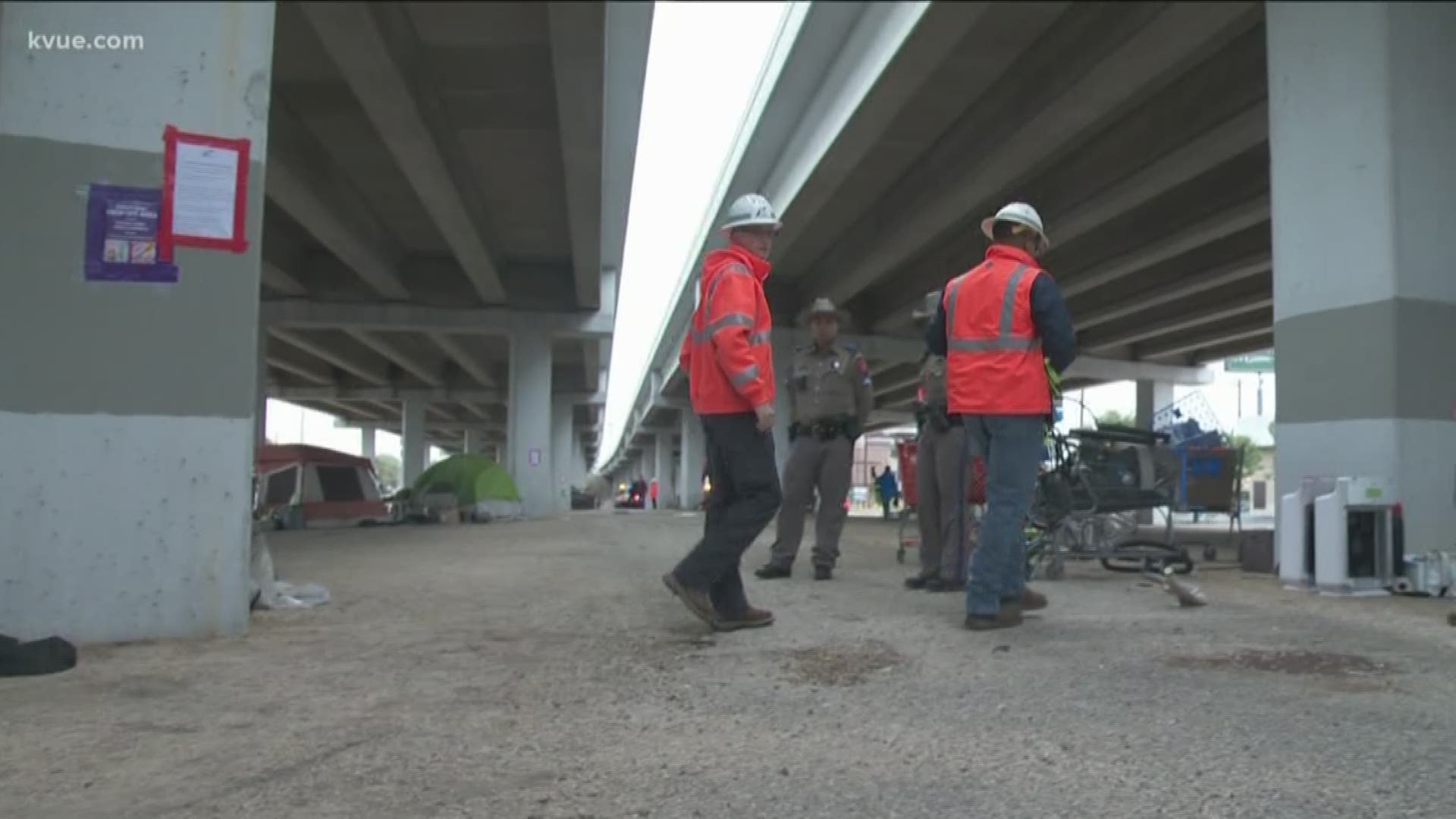 AUSTIN, Texas — The Texas Department of Transportation (TxDOT) was directed to start cleaning up the homeless camps under overpasses at least once per week starting on Monday, Nov. 4, the governor's office confirmed.

Gov. Greg Abbott's office said crews could clean the underpasses more than once per week, under his guidance.

On Monday at 8 a.m., clean-ups were expected to start at U.S. 183 and Burnet Road before crews move to Interstate Highway 35 at Sixth Street and then to State Highway 71 at South Lamar Boulevard, the governor's office said.

"We received direction from the governor that he would like us to step in and do some of these cleanups and so we are serving at his direction," said Diann Hodges, spokeswoman for TxDOT. "By posting that notice today, we're giving them a few days' notice in order to, you know, get their belongings together and be able to remove them before the cleanup takes place."

Although the governor's office has acknowledged that Austin City Council's homeless ordinance changes are a "meaningful step," the office said in a statement to KVUE earlier this month that it would be getting involved in Austin's homeless issue.

Actually, the office confirmed to KVUE on Oct. 18 that it was getting involved after Austin City Council met on Oct. 17 to change its ordinances regarding camping, sitting and lying on public sidewalks.

Austin Mayor Steve Adler responded to the governor's Tuesday action on Twitter, saying the city is focused on housing, not hiding.

In a statement to KVUE on Tuesday, the governor affirmed his commitment to addressing Austin's homeless issue from a state level.

"Governor Abbott has been clear that unless the City of Austin demonstrated improvements to protect public health and safety, the State of Texas would step in to address this crisis," the governor's office said on Tuesday. "These notices are the first step to clear encampments from underpasses throughout the city, while providing those experiencing homelessness with access to resources for services and care."

Abbott's office said it would work with private sector and faith-based organizations for long-term solutions as part of an effort spearheaded by the Austin Chamber of Commerce.

Back in June, City Council voted to make it legal to sit, lie or camp in certain public spaces.

At the October meeting, city council met to discuss changes to the homeless ordinances. Among other things, the changes mean camping on all city sidewalks will be banned, but sitting and lying down will not – unless it is 15 feet from an operating business.