Meet Milo, a high-tech robot who's known around here for working with students with autism. 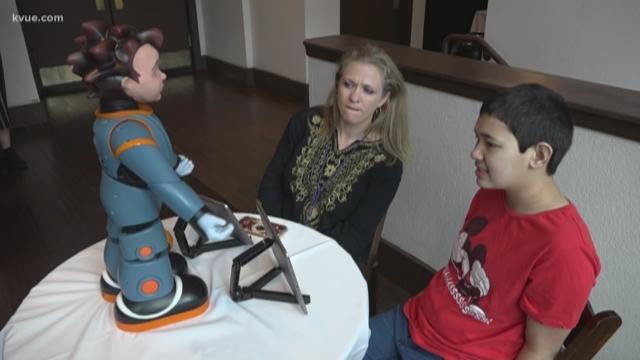 At Elgin ISD, a high-tech kid robot is helping students with autism. His name is Milo and he's working to transform how they interact with others.

"He's meant to be basically a teacher or a co-therapist," Milo's creator Richard Margolin said.

Milo is designed to improve social and behavioral skills in children who have autism.

"Milo has a bunch of different programs that concentrate on different themes, like helping a person calm themselves down, greetings, turn-taking and making choices," Dr. Darst said. "He can repeat a lesson multiple times. We're not really able to replicate that."

Elgin middle schooler Abby Wise works with Milo twice a week. She has a hard time talking to others, but with the robot she opens up, dances and smiles.

"It has definitely helped her interact and talk and be more vocal," Abby's father, Joshua Wise, said.

"It's really hard for people with autism to work with other people and Milo really bridges that," Margolin said.

"We have students who would never make eye contact for a greeting or a leaving moment, saying hi or saying goodbye, and that's happening now," Dr. Darst said. "Kids who wouldn't talk before, they're trying to talk."

Margolin said watching Abby interact with Milo makes him emotional. He said before his company RoboKind created Milo, there were only incredibly expensive robots on the market that weren't practical for school or home environments. He said by creating Milo, he put a cost-effective yet durable robot on the market that could be utilized in schools. Milo also comes with a curriculum created by experts in autism. Now, Margolin is hoping to see Milo in as many schools as possible.

Milo was developed at the University of Texas at Dallas. So far, he's entered 290 schools across the country.