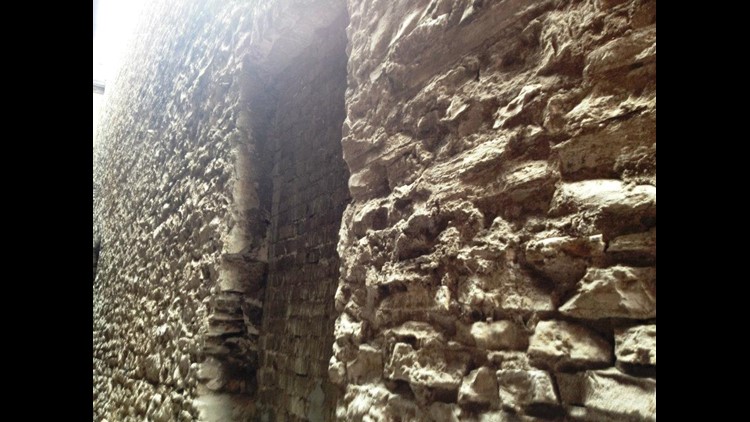 The freestanding wall between the InterContinental Stephen. F. Austin Hotel and the Paramount Theatre is the only remaining remnant of the original home of the War Department of the Republic of Texas.

The Paramount Theatre will be 100 years old next year, and the Texas landmark has no shortage of spooky stories to accompany it esteemed history.
Author: KVUE Staff
Published: 12:44 AM CDT November 1, 2014
Updated: 3:20 PM CDT September 16, 2019

AUSTIN, Texas — The Paramount Theatre will be 100 years old next year, and the Texas landmark has no shortage of spooky stories to accompany its esteemed history.

Located four blocks south from the Texas State Capitol, the theatre was built on Oct. 11, 1915.

Nearly a century later, we wish its walls could talk.

There are a few spirits, or ghosts, that employees have seen or have heard through the grapevine.

People said they've seen a woman, dressed in a white dress, roaming the aisles on the mezzanine floor.

She is seen in the same area where a freestanding wall from the War Department of the Republic of Texas stands.

The Paramount Theatre used to be Sam Houston's war office. It was built in 1839.

Urban legend has it that she might be a mourning mother or wife from the Civil War.

Another sighting at the theatre is a man with a top hat who sits in a house right opera box.

The man is smoking a cigar, dressed in 1920s attire.

Longtime Paramount volunteer, Flo Thompson, said she has smelled the cigar smoke before. Flo's been a volunteer at the theatre for over 30 years.

A KVUE photographer, unaware of the spirit of the 1920s man, also said he smelled cigar smoke below the opera box.

The last spirit sighting of The Paramount is a personal story of the theatre's.

In 2000, longtime projectionist of The Paramount, Walter Norris Jr., died in the projection booth. He was in the middle of switching the reels of "Casablanca." It was his favorite movie. The audience and employees knew something was wrong when, in the middle of the film, the screen went white.

The employees of The Paramount put together a shrine for Walter in the projection booth. Walter had a sweet tooth, so there is always some sort of candy bar, or a chocolate doughnut, at his shrine.

One time, a projector broke. Paramount staff did everything under the sun to repair it but nothing worked. They then realized that Walter's shrine didn't have any sweets.

They quickly realized their mistake, and they swiftly put a candy bar (possibly a Snickers) at his shrine.

From that day on, as long as Walter has had his sweets, they haven't had any issues with the projector.

Walter's service was held at The Paramount. A flower from his casket still hangs on the back wall of the stage, directly across from the projection booth.

Some sightings of the spirits haven't always been friendly. A custodian at The Paramount refused to clean a bathroom at the top of the theatre, near the projection booth. He said he felt a negative presence.

Former artistic director of The Paramount, John Bernardoni, said he made a deal with the spirits when he embarked on a mission to save the theatre in the '70s and '80s.

Have you felt the spirits of The Paramount Theatre?