'He's got a contagious spirit to him': 7-year-old inspiring others after crash

Will Allen has a tough road ahead. He's now in a wheelchair after a bad car accident. However, that hasn't stopped him from inspiring everyone who he comes in contact with. 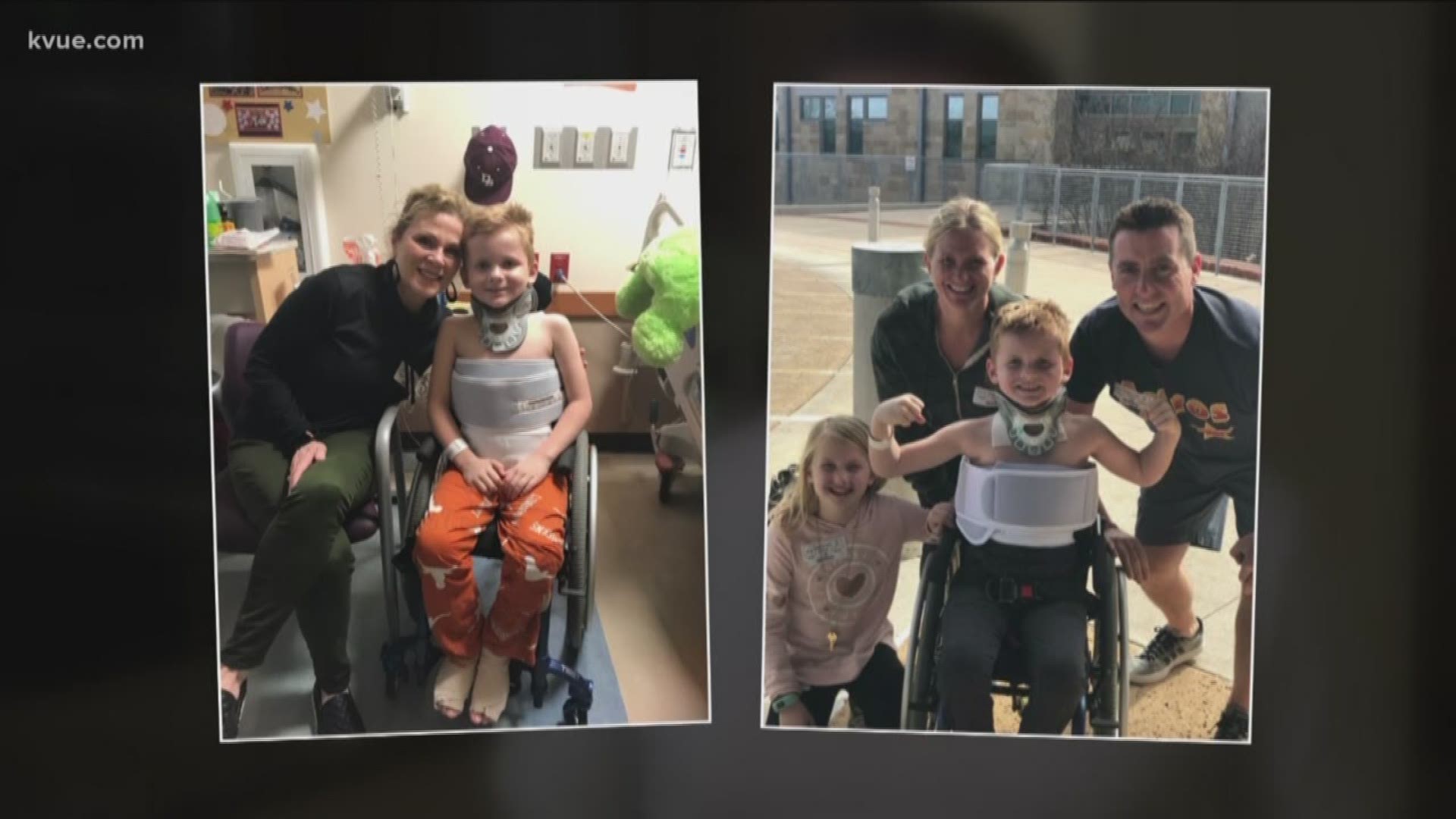 DRIPPING SPRINGS, Texas — Inspiration comes in many different forms -- and many different ages. There is a 7-year-old Texas boy who is going through something extremely difficult but is inspiring everyone around him in the process.

In February, Tim Allen was on his way to a Super Bowl party with his 7-year-old son, Will Allen. They ended up getting in a bad accident that sent both of them to the hospital.

While Tim was able to get out of the hospital soon after, Will stayed for six weeks, getting two rods and nine screws in his back. He now is back home in a wheelchair.

"There's been some tough moments," Tim Allen said. "We have to get up a tad bit earlier and get going. Adjusting to the new schedule has been the biggest challenge."

Even with all this change in his life, Will hasn't changed his positive outlook on life.

"Every day, he wakes up with a smile on his face," Tim Allen said. "He has an amazing attitude. He's got a contagious spirit to him."

Tim Allen said Will got his relentlessly optimistic attitude from his mom and Tim's wife, Shara Allen.

Shara Allen said that attitude is simply the way it's always been for her.

1 / 12
Family
A Dripping Springs boy is an inspiration to others after a serious crash left him in a wheelchair.

"What good can we take out of the day even when some days just aren't good as others," Shara Allen said. "You just look for the good, and it's always there. You might have to look harder, but it's always there."

Shara Allen has been around Will a lot since he came home. She has been going to school with him, taking him to physical therapy and helping him get used to his wheelchair.

"He wasn't even able to sit in his chair for five minutes at first," Shara Allen said.

Now, Will is going to school on his own and sitting a little longer than five minutes.

"Now he's doing 360s, wheelies and he's in it all the time," Shara Allen said. "He's just so strong and very resilient."

For Will, he simply enjoys spending time with his family just like always.

"We get to play games together," Will said. "We get to watch movies. We get to shoot baskets."

This family also gets to have one goal for Will as well.

"We had a prayer the other night before dinner, and he said in his prayer that he prays to walk again someday," Tim Allen said. "That's our goal for him, too."

No matter what happens for Will, there's a good chance his outlook on life will be something that continues to inspire his family and his community as well.

"His spirit, his strength and his determination are inspiring to me, our family and so many people that are around him," Tim Allen said. "It's been something to see. It's amazing."

The Dripping Springs community and Central Texas continue to find ways to support Will and his family. The Dripping Springs High School baseball team is planning to have a "Willpower Night" on April 18. They'll let Will throw the first pitch with "#Willpower" banners posted around the field.

The Round Rock Express will also be holding their own "Willpower Night" on May 31 -- the last day of class for most Dripping Springs schools -- where Will will throw the first pitch that night as well.

The Allen family is also in the process of creating the Willpower Community Foundation. Tim and Shara Allen hope to help other families who have a child going through a similar situation, specifically spinal cord injuries.

Motorcyclist dies in crash with 18-wheeler in Kyle