Police are investigating after they say a 2-month-old San Marcos girl was killed by her family's dog Tuesday. 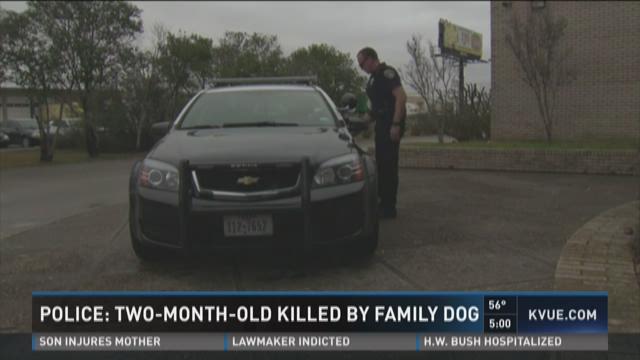 FRIDAY UPDATE: San Marcos police said on Friday that they are still waiting on autopsy results and have not found any signs of previous abuse.

Police said there was not enough probable cause to obtain a warrant for blood tests on the father for drugs and alcohol and he declined to submit to a voluntary test.

The investigation is ongoing.

SAN MARCOS -- Police are investigating after they say a 2-month-old San Marcos girl was killed by her family's dog Tuesday.

San Marcos police said animal control officers have impounded a German shepherd that was in the home.

EMS and SMPD were called to a home along Sagewood Trail in San Marcos around 1:30 p.m. Jan. 17 for a report of an unresponsive 2-month-old with “numerous animal bites.” The girl was transported to Central Texas Medical Center in San Marcos where she was pronounced deceased.

The father of the child, who SMPD said is in his 30s, told police he fell asleep when the girl was napping in an infant bouncer on the couch next to him, and woke around 20 minutes later to find the girl unresponsive and cold to the touch on the floor.

According to SMPD the bites to the girl were concentrated in her abdomen area.

SMPD added the German shepherd was submissive when approached by investigators and will be impounded for at least 10 days, after which authorities will determine if it will be euthanized. The dog had been with the family for more than eight years.

According to Earnest, it will now be up to the family to decide if they want to keep or surrender the dog. She said it will likely be difficult to adopt the dog out to another family.

"As you can imagine the family is very traumatized and upset, they've suffered two losses, first their infant daughter and also their family pet," said Earnest.

Earnest said they had not been called to the residence before, and told KVUE the father said the dog was not previously aggressive. They are requesting the dog's shot records to learn more about his health.

"The family reports the dog was always good with the child, again the child was new to the family, but the dog didn't have a history of being aggressive," said Earnest.

She also said the mother of the child was not at home at the time of the incident, saying she was at work.

Earnest said it's too early to tell if there will be any further charges in the case, and said it is an open investigation.

"It's really difficult to determine that at this time, it's still very new, we don't have results back from the Travis county medical examiner so its hard to make that determination at this point," said Earnest. "We're looking at this as an accidental death, but of course anything is possible until the investigation is completed."

Police said are waiting for autopsy results from the Travis County Medical Examiner’s Office in Austin. Earnest said it is routine for authorities to conduct an autopsy when a child dies to make sure they have all the information when investigating.

"In the case of a young child absolutely, we want to make sure we don't miss anything," said Earnest.

Child Protective Services is investigating. Earnest said there aren't any other children in the home, but says CPS investigates anytime there's a death of a child.

Earnest said the family had recently moved to the area, and is in shock.

"I really don't have any advice, this is just something so tragic for both family and for a pet lover, a pet owner, you don't really know what animals will do, but I don't think this family had any idea of what this dog was capable of," said Earnest.

Hunter Flanary has lived in the neighborhood for about 2 years.

"Their dog has been real friendly, him and my dog have played together, did not seem like anything like this could happen," said Flanary.

He said he has seen the family out a few times.

"Him and his dog's relationship has always been really friendly especially around the child, I've seen them play around there, it's just incredibly shocking that this happened, and I'm still trying to get over the shock," said Flanary. "Rally sad and really surprises me that, I mean even if you feel comfortable around a dog you've owned for along time, there's still danger there, so be careful."