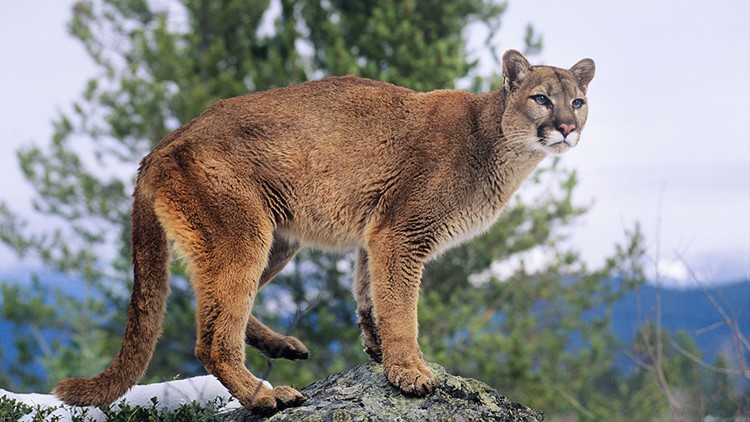 While most Texans are familiar with farm animals like cows, horses and goats, there are a few more dangerous animals that lurk around in Texas and some may not know how to properly react.
Author: Rebecca Flores
Published: 10:31 AM CDT May 28, 2018
Updated: 9:54 AM CDT June 1, 2018

CENTRAL TEXAS — Lions and tigers and bears? More like bobcats and scorpions and snakes here in Texas!

While most Texans are familiar with farm animals like cows, horses and goats, there are a few more dangerous animals that lurk around in Texas and some may not know how to properly react.

With the help from our friends at Texas Parks and Wildlife, we have come up with a guide that tells you exactly how to react to certain types of dangerous animals you might encounter in Texas.

Mountain lions are also known as cougars, pumas and panthers, according to Texas Parks and Wildlife. Whatever you decide to call them, they are still dangerous and strong animals.

Similar to mountain lions, bobcats are mainly active at night and prefer to stay near rocky canyons across Texas, according to TPW.

HOW TO REACT: Do not run or turn your back if you encounter a bobcat or mountain lion, TPW said. You should pick up any small children, gather everyone in a group, hold your ground and slowly back up. "Make yourself appear larger. Throw rocks and sticks. Fight back if attacked," said TPW.

TPW compares coyotes to a small German shepherd because they weigh 25 to 40 pounds on average. TPW said coyotes are extremely smart animals with a sharp sense of hearing, sight and smell.

To top that off, coyotes are also strong swimmers, according to TPW. Although coyotes' main food sources are rabbits, rodents, lizards and snakes, TPW said they will eat just about anything -- so, keep your distance.

HOW TO REACT: You should react to a coyote the same way you would react to a bobcat or mountain lion, according to TPW. Remember not to turn your back or run from a coyote. Also, hold your ground and slowly back away and if you're attacked, fight back by throwing rocks and sticks, TPW said.

While these highly venomous snakes are active during the day in the spring and fall, they become active at night during the heat of summer, TPW said.

Luckily for us, TPW reported that Timber rattlesnakes do not like like confrontation and rarely bite, but they said it does happen sometimes.

HOW TO REACT: The best thing to do if you encounter a venomous snake is to simply leave it alone. "Almost all snake bites occur when people are trying to move or mess with the snake," TPW said.

If you encounter a snake on a trail, you should turn around or go around the snake leaving a lot of room between you and the snake. However, if you find a snake in your yard, you should contact animal control.

If you find yourself extremely close to a snake, TPW said to stay calm, assess the situation and do not make any sudden moves that might startle the snake. Then, you should move away slowly and keep an eye on the snake the whole time, TPW said.

As Buddy the Elf could tell you himself, raccoons may look cute and all but they can get feisty if they are confronted by humans.

These curious creatures known for stealing food and hiding in and under buildings can become very destructive, according to TPW. However, only a rabid raccoon is likely to attack someone, TPW said.

HOW TO REACT: According to TPW, you should fight back, retreat to somewhere safe and contact a doctor for possible rabies treatment if you are attacked by a raccoon.

Scorpions are primarily nocturnal hunters and can usually be found in dark places such as under rocks, piles of trash, in shoes and bed sheets, according to TPW's Invertebrate Biologist Ben Hutchins.

Hutchins added that in order to avoid them, watch where you step, shake out your clothes and do not put your hands anywhere you can't see. For the best protection, seal around doors and other cracks and spaces in your home, Hutchins said.

HOW TO REACT: According to Hutchins, the best thing to do when you encounter a scorpion is to simply leave them alone. If you decide to remove them, Hutchins said to use the "cup and paper" method. "Throw a cup on them and then slip the paper underneath. Pick the whole thing up and carry it outside away from the door for release," Hutchins said.

Scorpion found on United flight from Houston to Ecuador

Armadillos -- aka the state small mammal of Texas -- are known for their ability to transform into a ball and for being prolific diggers. While they are more of a nuisance than anything else, armadillos often fall victim to cars and are frequently seen as roadkill, TPW said. Humans are more of a danger to armadillos than they are to us.

HOW TO REACT: If you encounter an armadillo, just stay calm and do not bother them.

Fortunately, wild hogs are typically not dangerous unless they cornered -- and attacks are virtually unheard of, according to TPW.

Feral hogs are a Texas-sized problem for Hays County residents

American alligators are one of the biggest reptiles in America, with their bodies alone ranging from 6 to 14 feet.

Alligators are quick on land as they are capable of running short distances, TPW said. According to TPW, they are most active between March and May.

"March through May is the alligator's peak time for breeding and nesting," said Hutchins. "During breeding season, females stay close to home territories while males may occupy ranges up to ten square miles."

Although American alligators typically avoid humans, there has been an increased number of encounters between people and alligators, TPW reported. TPW also said the alligators prey on pets, so keeping your furry friend close and on a leash is helpful. Also, Do not feed the alligators -- it's against the law, TPW said. "Alligators are naturally wary of humans, but lose their fear of people when they are fed."

Alligators, sharks, mountain lions and other predators are making a comeback

HOW TO REACT: In order to prevent running into an alligator, TPW said to keep your distance and to avoid swimming in areas that are known habitats for alligators, especially at night. However, there are a few things you shouldn't do if you encounter an alligator, according to TPW: