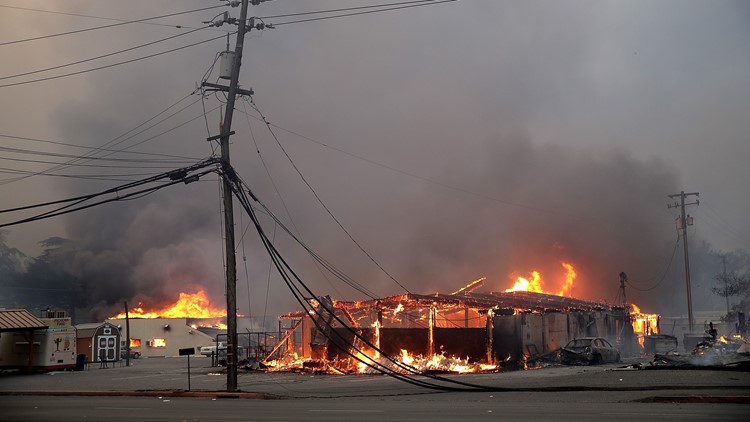 CALIFORNIA — Although no cause has been determined for the Camp Fire, a growing number of survivors are placing blame on Pacific Gas & Electric [PG&E] and say they plan to sue the utility giant.

One of those considering joining the fight, Jim Haunstein, who lost his home in Paradise. He said in the weeks before the fire, PG&E workers came to his home and marked some of the trees on his street for trimming.

"They had come up to us and said, 'You’ve got some branches up to over here that are touching the power lines. We’re going to come in and cut them away,'" Haunstein recalled. "I said, 'That’s great. I’m glad you’re doing something.'"

But, he said, they never followed up.

"When you mark them, you would expect them to come back and address it, but no," Haunstein said.

That's one of the reasons Haunstein decided to show up at a meeting in Gridley Tuesday night, hosted by the California Wildfires Lawyers — a group of lawyers from across the state who specialize in helping people impacted by mega-fires.

Fire evacuees do their best on a sad Thanksgiving

So far, they say more than 100 Camp Fire survivors have hired them to launch lawsuits against PG&E, alleging the utility company's faulty power lines led to the deadly inferno.

"We’re suing PG&E. We’ve already filed our first lawsuits," Eric Ratinoff, one of the attorneys, said. "In other cases, we’ve waited longer. In this case there isn’t any reason to wait."

Cal Fire is still investigating the cause of the Camp Fire, but Ratinoff points to two incident reports filed by PG&E that show the morning the fire started the company had two separate power-line outages in the area.

At a town hall in Gridley where the "California Wildfire Lawyers" are advising #CampFire survivors. Although the cause of the fire is under investigation, these lawyers have already filed a lawsuit against PG&E, saying the company is undoubtedly at fault. pic.twitter.com/ACa4VSEr7q

“The fire appears to have been ignited in the same area where those reports were from," Ratinoff said. "That’s pretty damning evidence it seems.”

ABC10 reached out to PG&E regarding the lawsuit and Haunstein's situation. The utility company responded with a statement offering their condolences to the communities impacted and that their focus right now is on helping first responders and their customers impacted.

Even so, several fire survivors are still questioning why they received a text message from PG&E the night before the fire started warning of fire danger and possible preemptive-power outages.

"I think if it’s true that the sparks started the fire from faulty lines that they already knew were faulty, that’s a major issue," Haunstein said, "And I want to be a part of the fight against PG&E."