Gov. Abbott said the City's policies on homelessness are creating an increase in assaults and care more about suspects than victims. 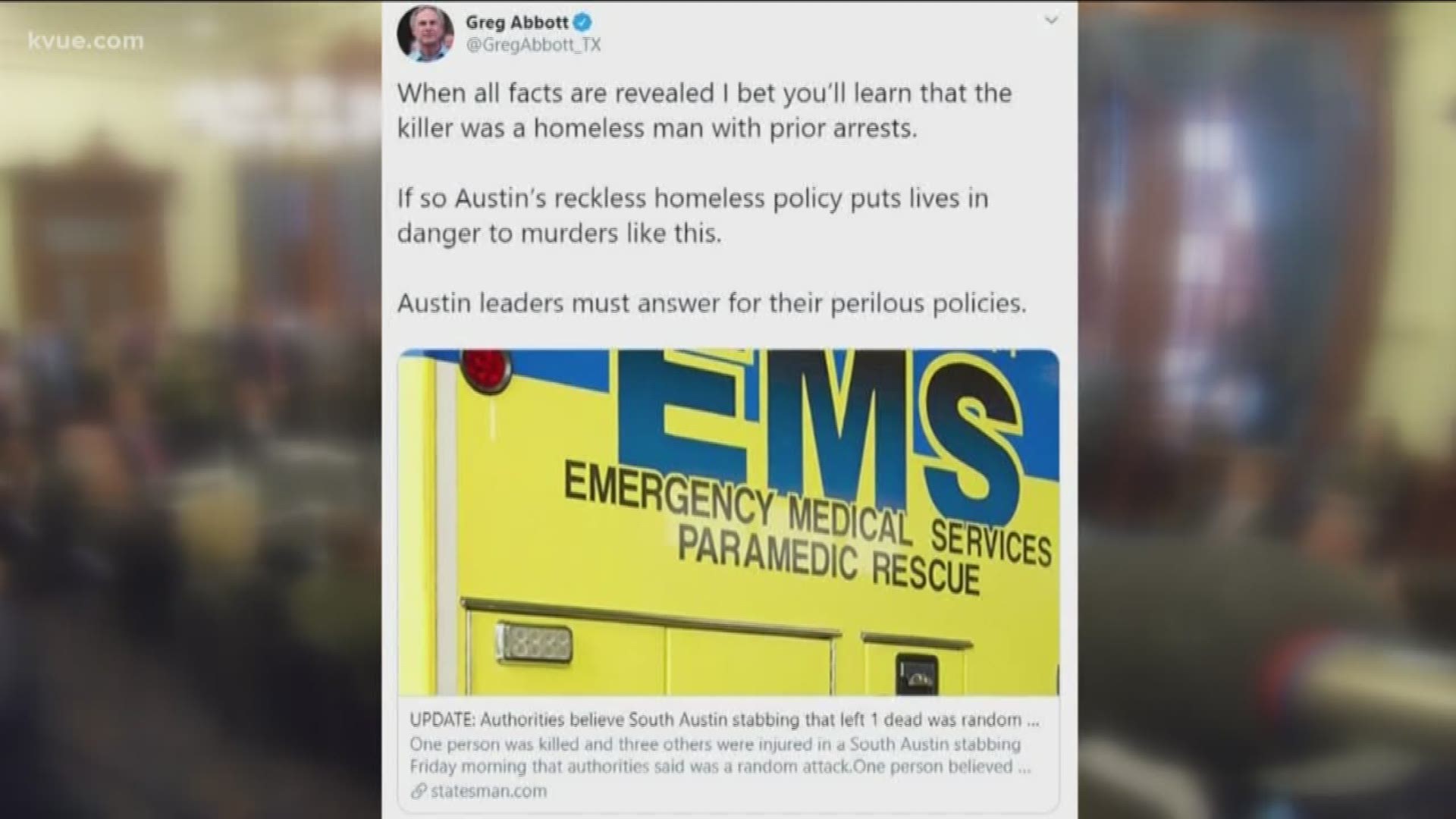 "What Austin has done over the past half-year is to perpetuate a sense of lawlessness in this city by the homeless," Abbott told reporters during a news conference Tuesday.

Tuesday was the first time Abbott spoke to reporters since posting a tweet last Friday, writing in part, "Austin's reckless homeless policy puts lives in danger to murders like this."

The post was in reference to an attack that happened Friday morning. Austin police said Dylan Woodburn assaulted someone at Bennu Coffee on South Congress Avenue. As an officer was trying to handcuff him, Woodburn got away, went into the Freebirds and stabbed two people – killing Johnathon Aguilar, who was a manager at the restaurant.

"They have removed seemingly any legal consequences to the actions of where the homeless lie, sleep, where they defecate, with regard to the use of needles, with regard to any potential crimes," Abbott said. "We see an escalation of physical attacks on people with an inadequate response by the City of Austin – by law enforcement – to make sure that these people are going to be accountable to these crimes."

This past summer, the Austin City Council voted to change some of its homeless policies and get rid of rules banning people from sitting, lying and camping on city streets.

The governor said there were reports of violence and health concerns, so he issued Austin an ultimatum. The council voted to essentially reverse its policy.

But Abbott said the damage is done.

"There has been an elevation and an increase in the number of people who are physically assaulted and an attitude by the City of Austin that seems to be one where they care more about the homeless individual committing the crime than the victims of these crimes," Abbott said. "And it's time for the City of Austin to step up and start enforcing law and putting the public safety of the people in Austin first."

KVUE reached out to Mayor Steve Adler and the Austin Police Department for reaction to the governor's comments Tuesday. Mayor Adler was tending to a family matter and was unavailable for comment. APD has not responded.

"The Austin Police Association has been very vocal about the issues with homelessness, the mentally ill and drug-addicted individuals. It’s our opinion that our officers have had their hands tied by city council, the Austin Municipal Court and the Travis County judicial system. Victims in this city don’t get justice. Just ask Mr. Dolan and the female victims from the Congress Ave. attack.

It would be appreciated if our local government could work with the state government on solutions for individuals who will never be stable enough to be housed. Homelessness in general is not the problem. The problem is homelessness and housed individuals that are chronically addicted to drugs or who suffer from mental illness. This is truly a drug addiction and mental health crisis that is destroying our beautiful city."

While Abbott discussed the City of Austin's policies Tuesday, his news conference was actually about the state's Domestic Terrorism Task Force. The group met earlier that morning to discuss threats to the state.

"We all need to understand that terrorism evolves and there are other ways in which the people of this state and entities in the state could be subjected to terrorism," Abbott said.

One such way, Abbott said, is through cyber-terrorism, adding the Texas Department of Information Resources (DIR) has seen an increase in attempted attacks on state agencies. 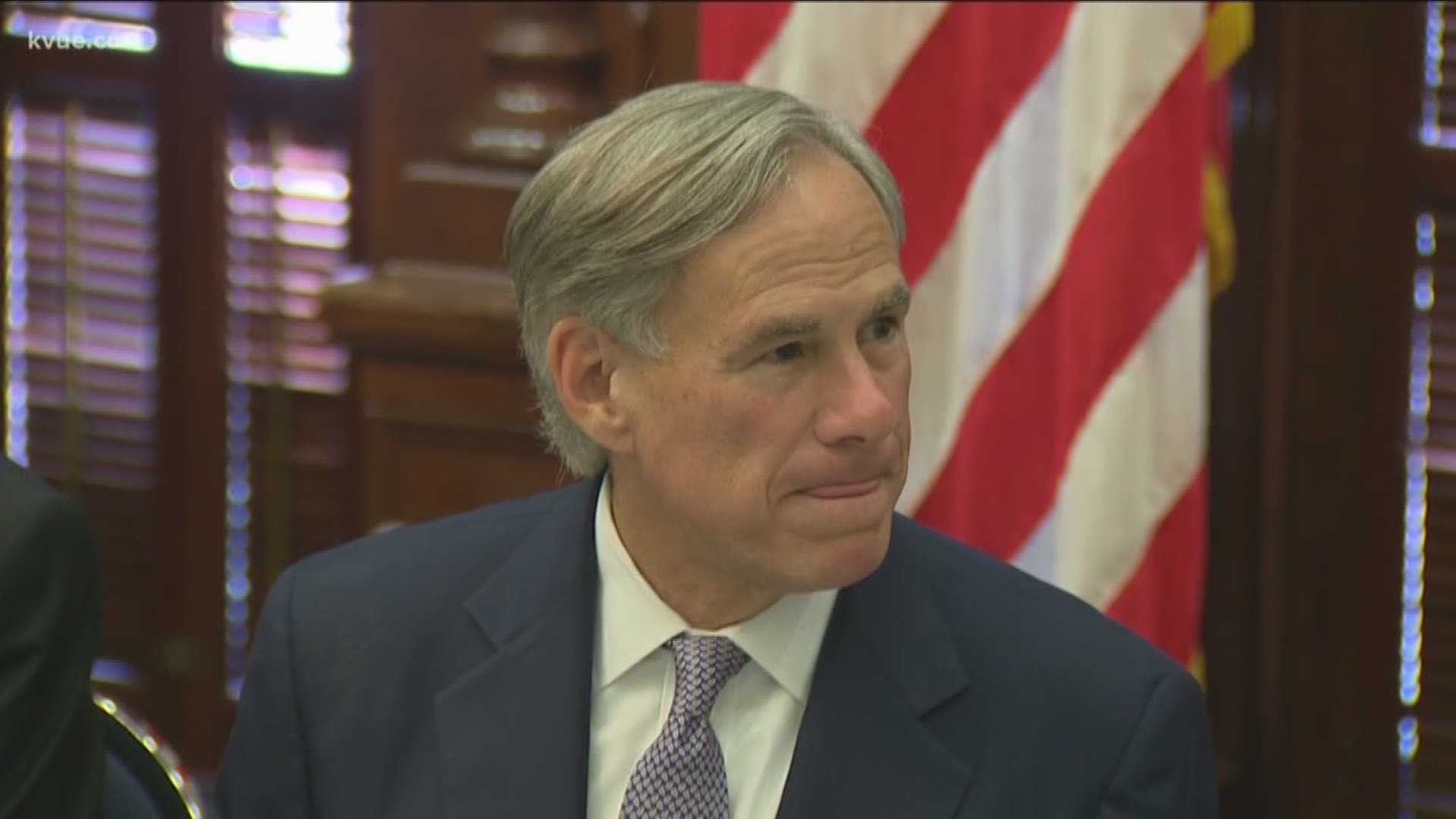 "[DIR] have noticed an increase of attempted attacks from Iran on state agencies at the rate of about 10,000 per minute," Abbott said. "And so, this is something that everybody in the State of Texas needs to be concerned and prepared to be able to address."

The Texas Department of Public Safety (DPS) released two State intelligence assessments on critical threats to Texas – Assessing the Mass Attacks Threat to Texas and Texas Domestic Terrorism Threat Assessment – as part of the roundtable discussion and submitted a report stating how the agency has implemented the governor's executive orders that were issued after the Domestic Terrorism Task Force was created.

Abbott established the task force last year after the deadly attack in El Paso. He said one of its goals is to develop a statue to define and prosecute domestic terrorism, including prosecuting individuals before acts occur.

WATCH: A look at the homeless camp opened by Gov. Abbott