He told KVUE Daybreak he's just putting himself in their shoes. 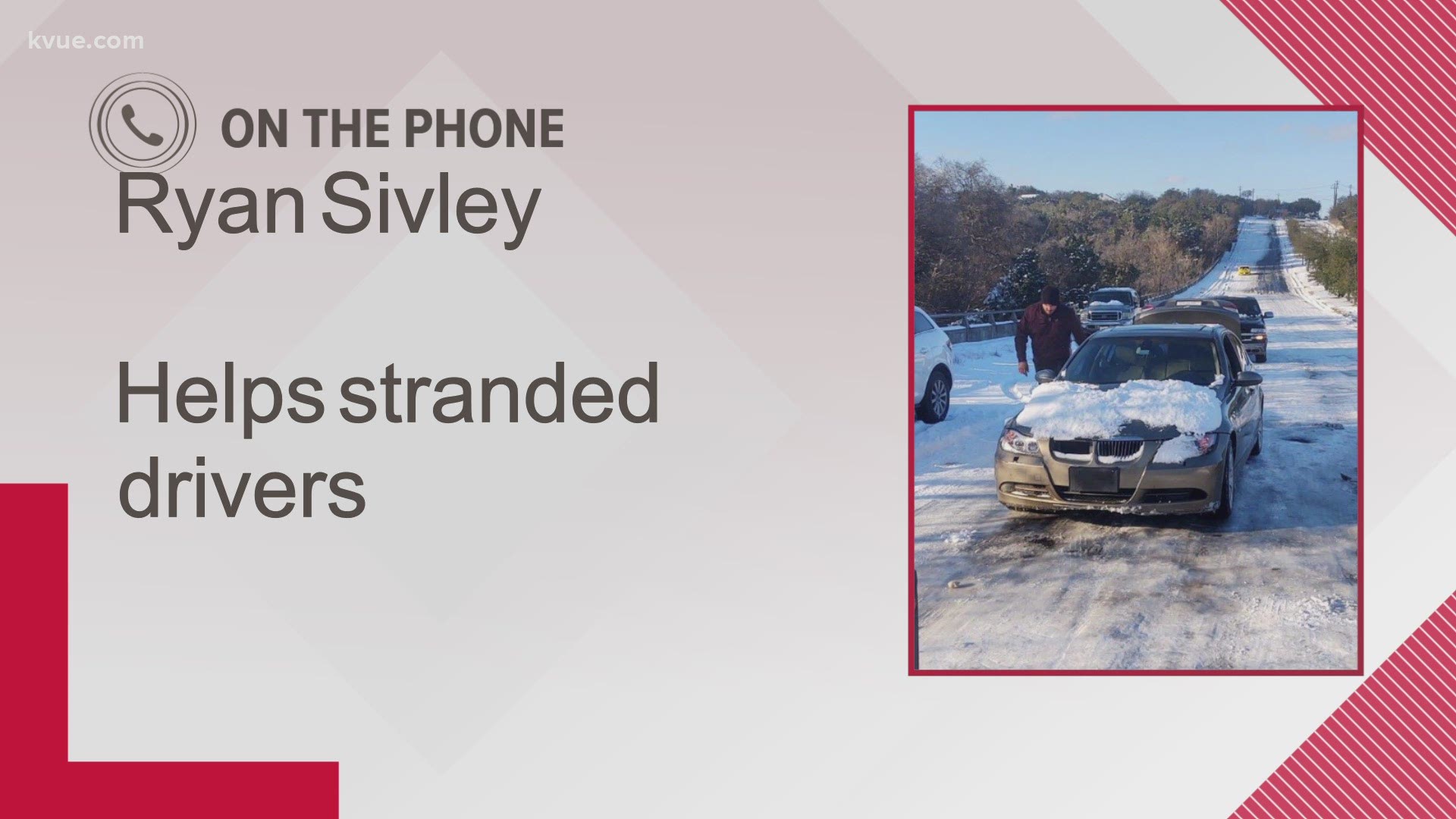 AUSTIN, Texas — As with any disaster, we always see Texans helping Texans. That's certainly no different with this winter storm that has pummeled Austin and Central Texas.

One Good Samaritan in Austin is helping rescue stranded drivers on the icy roads. He rescued 47 cars on Feb. 16, and he rescued 98 cars the day before.

Ryan Sivley joined KVUE Daybreak to explain why and how drivers can reach him if they need to. He said if anyone needs his help, they should just call him at 512-696-5965.

WATCH: Texans helping other Texans in need during winter weather

"I've been helping anybody I find the side of the road. I do a lot of off-roading with different groups in Austin, so I had recovery straps and chains and I have two trucks that are four-wheel drive," Sivley said. "I have a dully Chevy Diesel that's four-wheel drive. And I have a cruiser that's a four-wheel drive. So the last three days I've been doing is pulling people off the road and giving people safe rides. Last night I was at Seton and St. David's taking patients home."

He's also been helping stranded nurses get to where they need to be. KVUE's Yvonne Nava asked him how people have been responding.

"Usually they give me something like five or ten bucks for gas, but, you know, everybody is really happy," he said. "A lot of people really have no electricity or water. I've been trying to find places to take people. I've actually taken families from one home to another just to have utilities."

He's paying it forward. On March 1, 2020, he was in a bad car accident on Lamar Boulevard and Braker Lane. His pelvic bone was shattered and he almost lost his life.

"Well, I got hit by a few cars and a Harley. I can't do more than 20 pounds on my left arm and I can't walk for more than two hours a day," Sivley said. "So, I can drive a truck – it's pretty simple. And I've been picking up anyone I can who wants to sit in my truck and help me hook cars up."

We asked him why he's helping.

"Well, put yourself in their shoes," he said. "If you were sitting on the side of the road with your wife and your kids and you're freezing in the car and it's not running and you don't have anywhere to go and you don't have anyone to call, what do you do? I've seen wreckers turning people away because they won't pull them out due to liability. What? You need to stay in your car and just freeze to death? I if I was in that spot I would beg and hope that somebody would help me. So that's what I'm doing."

No power and no way out: One Austin neighborhood feels trapped in the cold