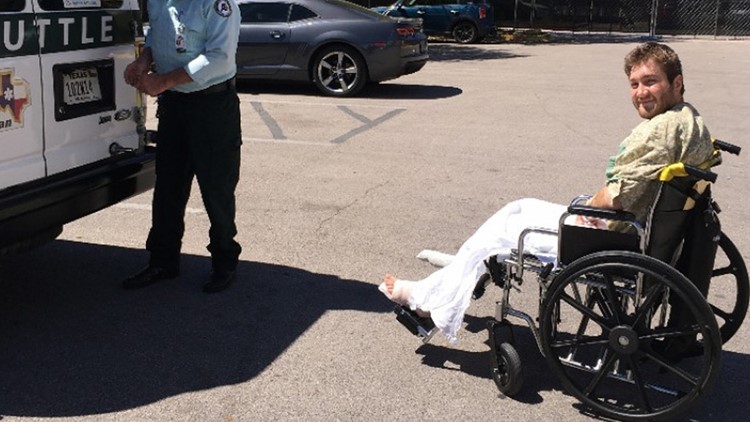 Photo by: GoFundMe created by Mathes' father
A photo of Colton Mathes as he recovers from his injuries from the fourth explosion in Austin.

AUSTIN — Colton Mathes and his friend Will Grote were walking in a southwest Austin neighborhood on March 18 when police said a bomb possibly triggered by a tripwire went off, sending them both to the hospital.

Weeks later, the Austin bomber has died and a GoFundMe has been set up in order to help Mathes, who is currently wheelchair-bound.

Mathes&nbsp;underwent immediate surgery following the explosion to remove shrapnel from his legs and feet, his father said.
GoFundMe set up by family

According to the GoFundMe set up by the father of Mathes on March 29, Mathes underwent immediate surgery following the explosion to remove shrapnel from his legs and feet. He said he still suffers from nerve damage, multiple deep lacerations and burn wounds.

His father said he set up the GoFundMe in order to help Mathes with any expenses he may incur while he is unable to work during his recovery. He is hoping to raise $20,000.

Go here to find out how you can donate to the other bombing victims.