Driving through Georgetown, you may have noticed the signs, dubbing the City as the 'First Purple Heart City in Texas.' 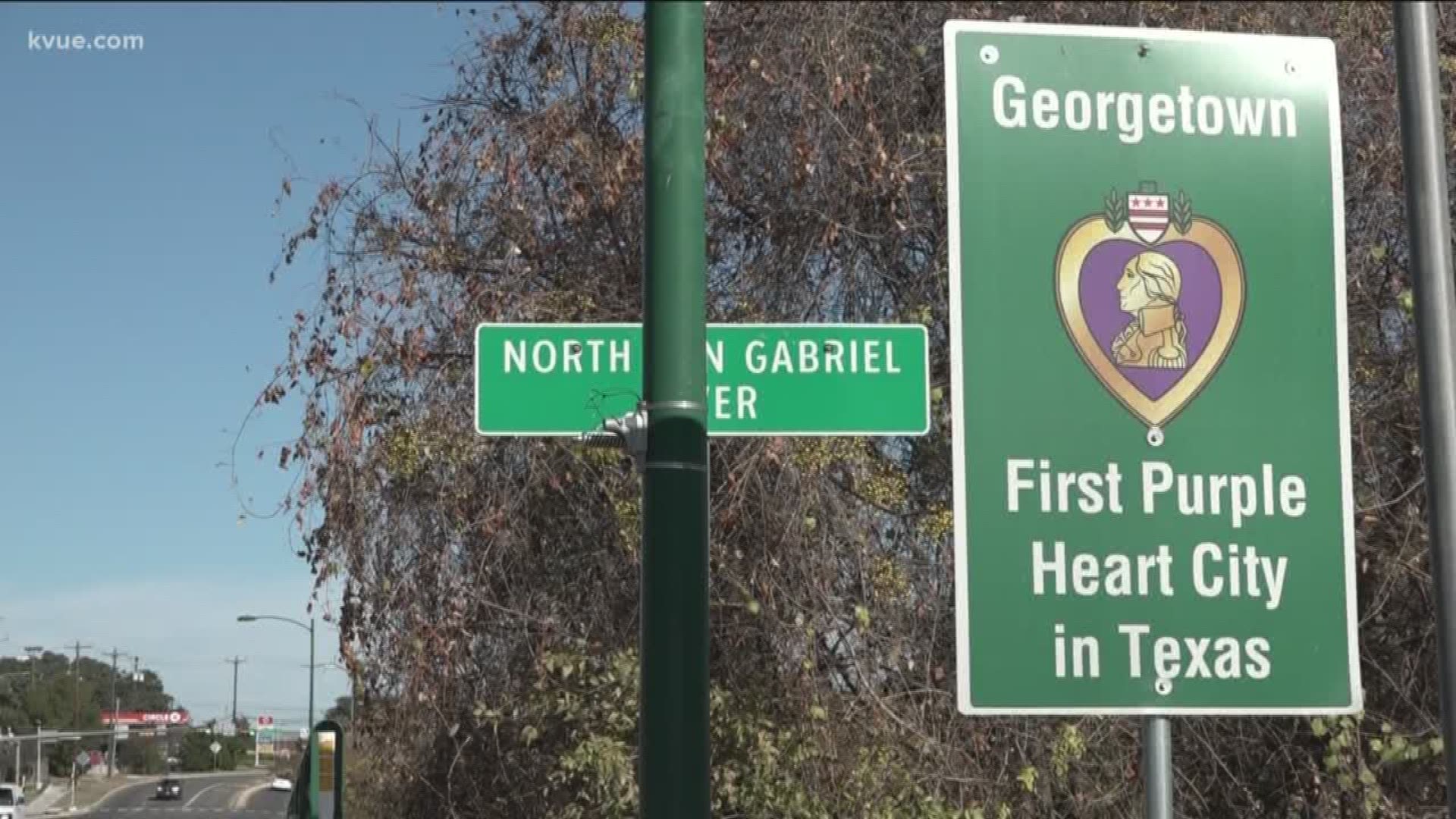 GEORGETOWN, Texas — A Central Texas city is making sure veterans wounded in war are not forgotten and are taken care of.

Driving through Georgetown you may have noticed the signs, dubbing the City as the “First Purple Heart City in Texas.” They're hard to miss. You see them posted all along popular roadways in town.

“As far as friends that are veterans here that are Purple Heart recipients like myself, I know that they really of love being able to walk down the street and seeing some of the signs,” said Aaron Cabrera, a purple heart recipient.

They're even on parking spaces too.

“Not a lot of cities do that and it makes you feel truly like you’re part of the community,” Cabrera added.

The parking spaces are reserved only for Purple Heart recipients, those wounded in combat like Cabrera. Cabrera was instrumental in making this happen, largely because of his own experience in war. He served in the U.S. Army and was injured in 2004 on a mission in Iraq.

“An IED went off in the vehicle behind me and a close to a two-inch piece of shrapnel went in my back and I guess blew the front of my stomach out,” Cabrera.

That’s how he earned his Purple Heart. After he healed and later medically retired, he came back home to Georgetown.

Thanks to social media, he heard about other cities across the country classifying themselves as Purple Heart cities and that sparked his curiosity.

“I'm like alright that sounds cool. I have no idea what it is – let's do it and then I reached out to somebody,” said Cabrera.

So, he reached out to City Councilmember Rachael Jonrowe, and according to their records in 2013, Georgetown became the first city in the state with the designation.

“It sounded like a good project to collaborate on," said Jonroe.

But besides the signs and the parking spaces, how has being a Purple Heart City made a difference over the years?

“Veteran services are now eligible for social services funding from the City of Georgetown and that wasn’t the case before,” Jonroe explained.

The City is prioritizing its veterans, and thanks to policy changes, has made it easier for them to get the health services they need. For those like Cabrera, the meaning behind a purple heart city is simple: it's a reminder he's not alone and certainly not forgotten.

“It’s basically like a thank you,” said Cabrera. “I’m hoping a thank you with a follow-up. It says thank you – we know you guys are here we appreciate your service, I appreciate what you guys have done. It’s a ‘thank you for your service on a larger scale. And specifically, within this community, it shows that there are veterans here. Sometimes you’re in a city and you don’t really think about what veterans are there, what they’ve done, what they’ve sort of accomplished or what they’ve been through. But now it’s sort of out in the open, showing us ‘hey we have veterans here, we appreciate who they are and we’re thankful for their service.’”

Cabrera told KVUE he hopes this focus on veterans' needs will continue. He also hopes this will make it easier for them to get connected to mental health services if they need it.

WATCH: Georgetown, Texas – Home of the 'Most Beautiful Town Square in Texas'