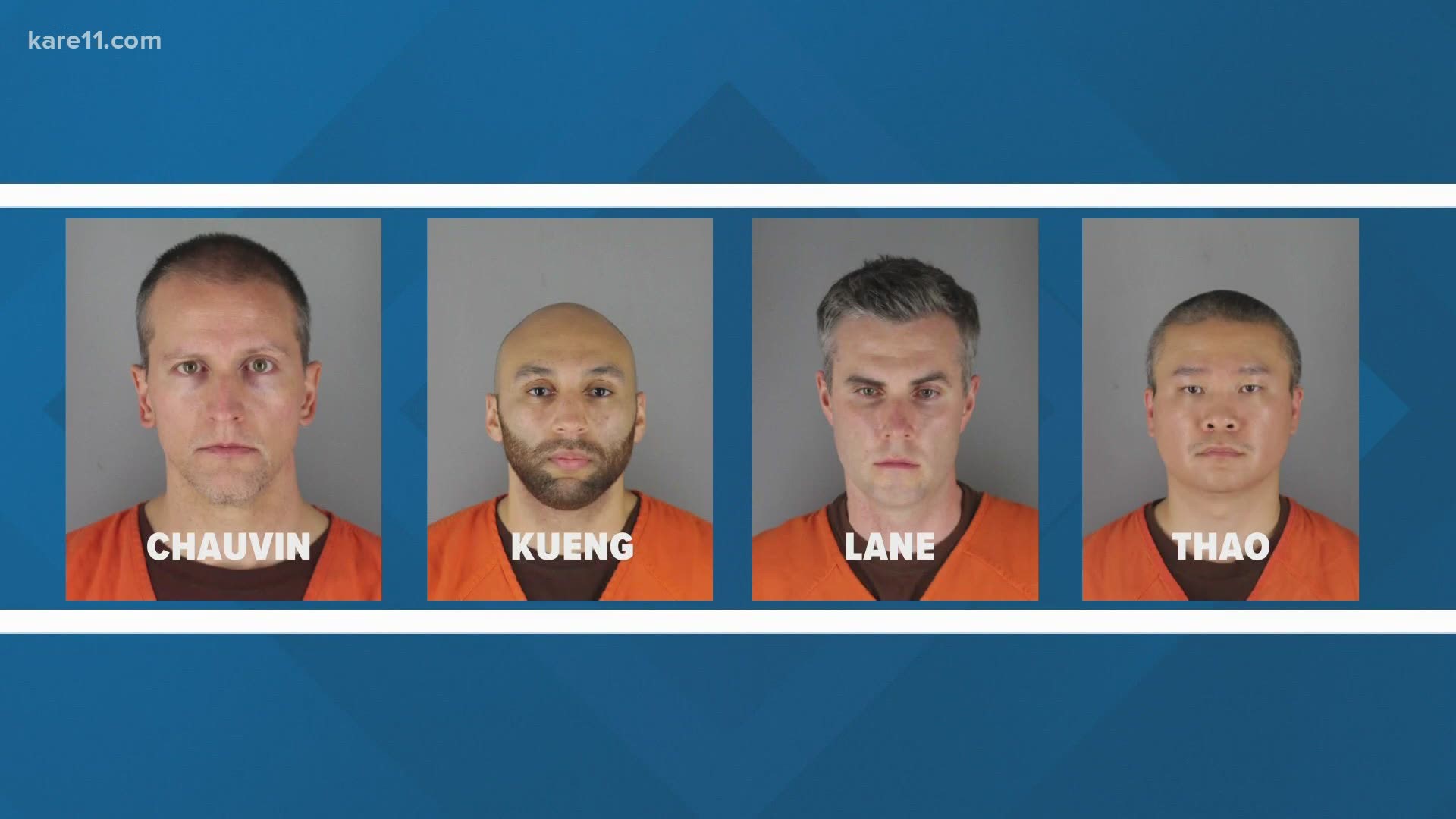 ST PAUL, Minn. — Charges against former Minneapolis police officer Derek Chauvin have been elevated, and three other former officers have now been charged for their involvement in the death of George Floyd.

"I say George Floyd mattered, he was loved, his family was important, his life had value, and we will seek justice for him and for you and we will find it," Ellison said at a news conference Wednesday as he announced the new charges.

The revised criminal complaint against Chauvin filed Wednesday says that Chauvin and Officers Lane and Kueng restrained Floyd prone to the ground with a knee on his neck for nearly 9 minutes. "During this time, Mr. Floyd repeatedly stated he could not breathe and his physical condition continued to deteriorate such that force was no longer necessary to control him," the complaint reads. "The defendant had his knee on Mr. Floyd's neck for 8 minutes and 46 seconds in total. Two minutes and 53 seconds of this was after Mr. Floyd was non-responsive. Police are trained that this type of restraint with a subject in a prone position is inherently dangerous. Officer Chauvin’s restraint of Mr. Floyd in this manner for a prolonged period was a substantial causal factor in Mr. Floyd losing consciousness, constituting substantial bodily harm, and Mr. Floyd’s death as well."

Criminal complaints issued against Thao, Lane and Kueng charge each of them with one count of aiding and abetting second-degree murder, and one of aiding and abetting second-degree manslaughter. Both charges are felony level. The complaint details how none of the three officers took action to assist Floyd, change his position or reduce the force Chauvin was using. In fact, the complaint alleges that none of the three officers moved from their positions as Floyd pleaded for help.

Minnesota BCA Superintendent Drew Evans said that one of those officers is in custody, and two are expected to be in custody in the afternoon.

RELATED: What is 3rd-degree murder and 2nd-degree manslaughter in Minnesota?

Minnesota Attorney General Keith Ellison is increasing charges against Derek Chauvin to 2nd degree in George Floyd’s murder and also charging other 3 officers. This is another important step for justice.

Gov. Tim Walz asked Ellison to take over leading the investigation on Sunday, in partnership with Freeman's office. On Wednesday, Ellison said that Freeman's team did an "excellent job" gathering facts, and that Freeman has been a "true partner" every step of the way.

Ellison asked the public for patience as he said building the case will take months, and they will not be able to say much publicly while they do it.

"Every single link in the prosecutorial chain must be strong," he said. "It needs to be strong because trying this case will not be an easy thing. Winning a conviction will be hard."

Ellison pointed out that Freeman is the only Minnesota prosecutor who has won a murder conviction for a police officer - that of Mohamed Noor in the death of Justine Ruszczyk Damond.

"History does show that there are clear challenges here, and we are going to be working very hard," Ellison said.

While Floyd family attorney Benjamin Crump and many protesters have called for a first-degree murder charge, Ellison said Wednesday that a first-degree charge requires premeditation and deliberation. Second-degree intentional murder means the person had to intend for death to be the result. He explain the charge he filed against Chauvin - second-degree unintentional murder while committing a felony - by saying that his team will contend that "George Floyd was assaulted, and so that would be the underlying felony."

FAMILY’S REACTION: This is a bittersweet moment. We are deeply gratified that @AGEllison took decisive action, arresting & charging ALL the officers involved in #GeorgeFloyd's death & upgrading the charge against Derek Chauvin to felony second-degree murder. #JusticeForGeorge pic.twitter.com/jTfXFHpsYl

"This is a significant step forward on the road to justice, and we are gratified that this important action was brought before George Floyd’s body was laid to rest," Crump said later in a released statement. "That is a source of peace for George’s family in this painful time. Attorney General Ellison has informed the family that his office will continue to investigate and will upgrade the charges to first-degree murder if the evidence supports it."

Demonstrators here in Minnesota, across the country and the globe have demanded charges against the three other officers who responded to the call that ended in Floyd’s death. While speaking with reporters Wednesday morning Crump called the three men complicit, saying the criminal complaint revealed that one of the officers told Chauvin that Floyd did not have a pulse, and asked if they should roll the man on his side. Crump says that awareness that Floyd was in serious trouble, combined with the failure to act, made the three culpable in the death.

Ellison said in the news conference Wednesday that public pressure, and the scheduled memorial service for George Floyd on Thursday, did not influence his charging decision.

"I was prepared to withstand whatever calls came," he said. "We made these decisions on the facts that we have gathered since this matter occurred and made the charges based on the law that we think applies."

To the protesters around the world watching the Floyd case, Ellison offered a message of encouragement to continue working for justice and systemic change in their own communities.

"There’s a lot more to do than just this case, and we ask people to do that," he said.

Ellison asked for the public's trust that his team and Freeman's team are pursuing justice, but he said that the "origin of the trust problem" is a historical under prosecution of public guardians.

All four officers were fired by Mayor Jacob Frey and Police Chief Medaria Arradondo the day after the video of the fatal encounter surfaced on social media.

Chauvin is currently being held at the maximum security Oak Park Heights Correctional Facility, after being transferred there due to concerns about his safety, and potential exposure to COVID-19.

Gov. Walz reacted to the new charges with a statement Wednesday saying that they are "a meaningful step toward justice for George Floyd," but that the worldwide protests are about more than one incident.

“George Floyd’s death is the symptom of a disease," Walz said in a statement. "We will not wake up one day and have the disease of systemic racism cured for us. This is on each of us to solve together, and we have hard work ahead.”

In a press conference Wednesday evening, Walz addressed the importance of the Floyd case as a society.

"I think this is probably our last shot as a state and as a nation to fix this systemic issue," he said. "This rage that you saw, and the violence excluded from it – those who chose to go down that path – the message is now, here in Minnesota for the last five days, come back to the issue at hand, which is the systemic issues and the systemic racism and the lack of accountability, up and down our society, that led to a daytime murder of a black man on a street in Minneapolis."

He added that as protests arose nationally, it made it clear that it's not an isolated incident.

"It's very clear that there is a lot more to this, and communities have been telling us that," he said.

When asked about his call to fix systemic issues, Walz said that he's confident that the proposals that will be introduced during next week's special session will be the groundwork for making the necessary change.

New Jersey recently announced new law enforcement reform to help increase the trust between the police and the communities they serve.

Minneapolis Mayor Jacob Frey also issued a statement, saying:, “That George Floyd’s plea – that his struggle to survive – went unrecognized and unaided by not just one but four officers will live forever as the most chilling moments in our city’s history. Failing to act amounted to a failure to recognize George’s humanity. As Chief Arradondo has stated, silence is complicity, and complicity cannot be tolerated.”