Family members of Texas prisoners gathered at the State Capitol near the Governor’s Mansion, asking for the release of their loved ones over COVID-19 fears. 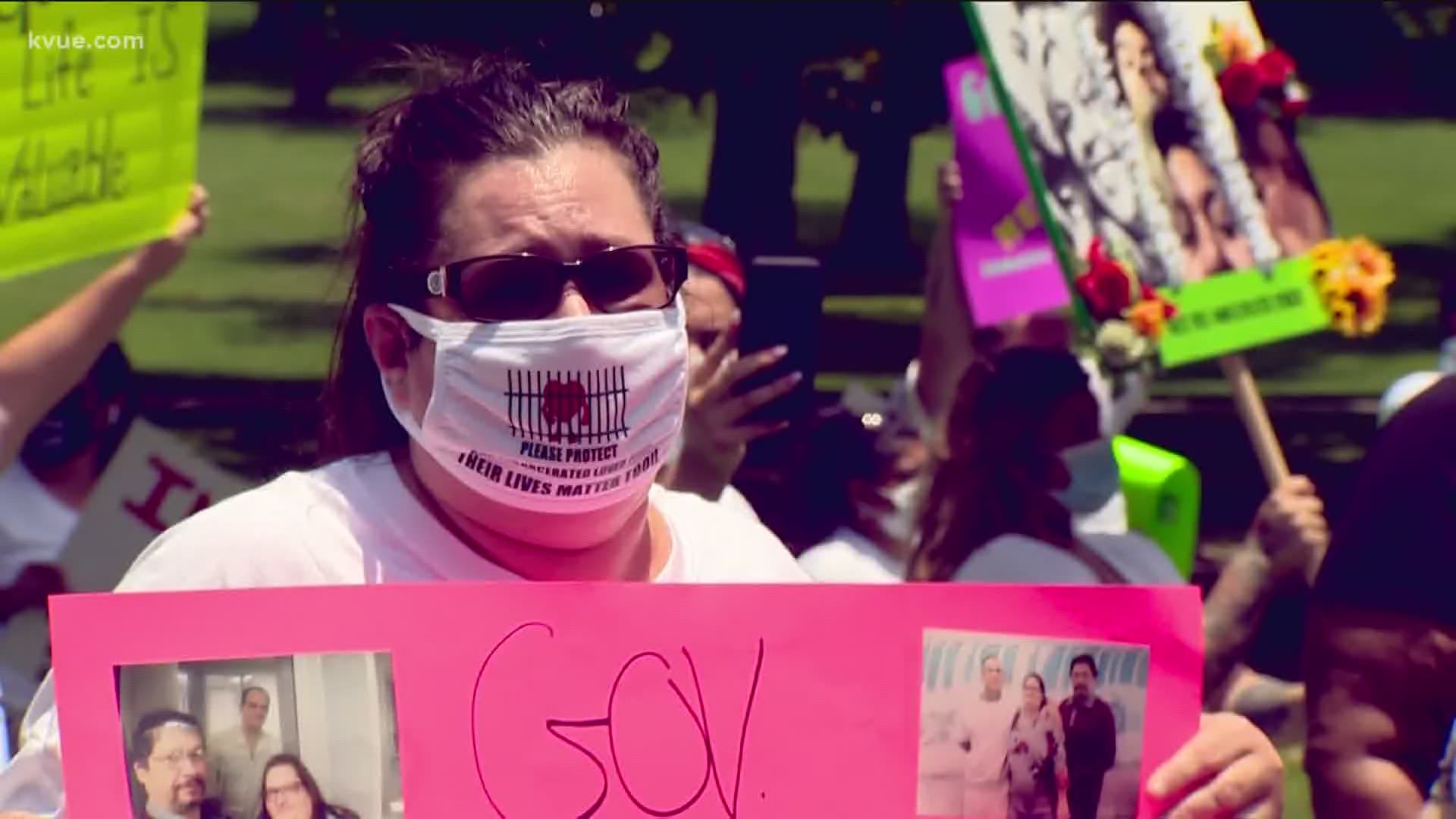 AUSTIN, Texas — As the coronavirus ravages Texas prisons, family members are calling for the release of their loved ones who are near the end of their sentence or who may be eligible for parole.

Dozens of demonstrators gathered on the State Capitol lawn on Saturday outside the Governor’s Mansion, asking Gov. Greg Abbott to use his powers and direct the Texas Board of Pardons and Paroles to release their loved ones.

“We're not just saying open up all the prisons in Texas and let everyone out,” said Lovinah Igbani, who helped organize the rally. “In prison, there's no way for them to socially distance. Prisons are already overcrowded. It's impossible for them to be 6 feet. They mandate that we were 6 feet and have us going through certain phases to reopen. But for them, how can they protect them? ... So basically, they're just waiting to die."

According to the Texas Criminal Justice Coalition, there are at least 79,000 Texas prisoners who are eligible for parole.

The Texas Department of Criminal Justice (TDCJ) reports 2,495 offenders have the virus, 36 have died and 22 other deaths are under investigation as of May 22.

“Let them live out on parole rather than in a body bag,” Igbani said.

Protesters said even if they were released on house arrest, that would be better and safer than staying in prison.

“I have two boys in TDCJ,” said Lisa Sanchez, who attended the rally on Saturday. “We're all human. We all make mistakes. We can all change. Please do the right thing and let them come home. They're loved and they deserve a chance.”

Her younger son made parole and was ready to start a six-month program in April, which would have been his final step before coming home, but Sanchez said he’s still behind bars.

“Everybody pray for God's will to be done, for Abbott to have a change of heart and for visitation to open up and for COVID-19 to go away,” Sanchez said.

In late March, Abbott banned the release of dangerous felons from state jails.

Earlier in May, the state deployed tens of thousands of COVID-19 test kits to prison units across Texas.

On Friday, the governor ordered the suspension of all in-person visits to county and municipal jails to prevent COVID-19 from entering the jails.

This was the first protest held by Families For Change in TDCJ related to the coronavirus concerns and organizers said it won’t be the last.