Manley confirmed on July 26 that one shooter was the driver of a car and said the other was in the crowd and may have opened fire on the car as it drove away. 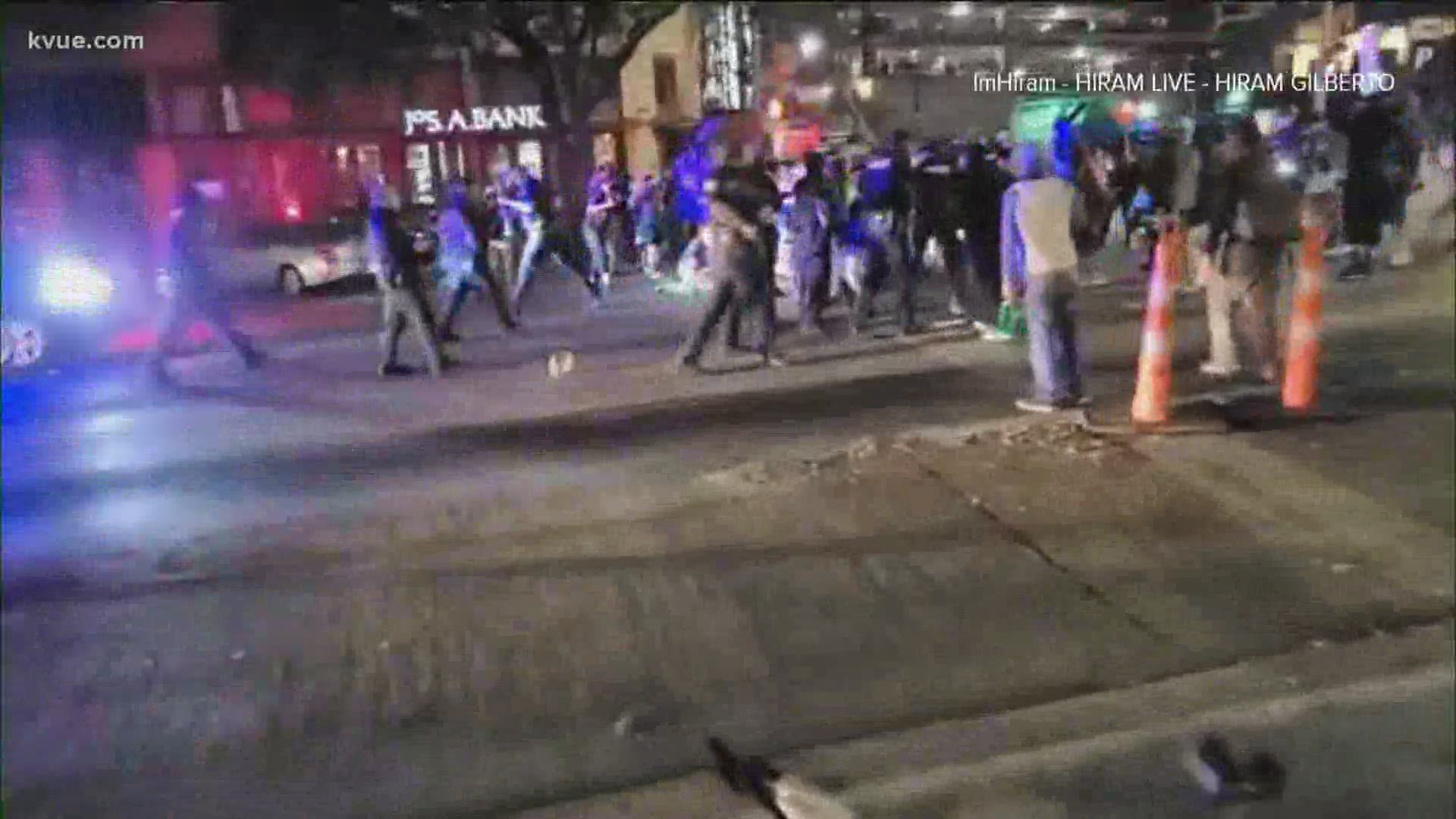 AUSTIN, Texas — One person is dead after a shooting at a Black Lives Matter protest in Downtown Austin on Saturday night.

Austin-Travis County EMS said the incident happened around 9:52 p.m. near East Sixth Street and Congress Avenue. However, Austin police later clarified they responded to 300 Congress, between Third and Fourth streets.

The victim, identified by police on July 26 as 28-year-old Garrett Foster, was taken to Dell Seton Medical Center, where he later died. Police said the incident was a homicide.

In an update on July 26, Austin Police Chief Brian Manley said reports indicated Foster was carrying a rifle when he approached the suspect's vehicle. The suspect then shot out of their car at Foster, according to APD. Manley said that the person who shot Foster called 911 to report that someone had pointed a gun at his vehicle and that he fired at the person pointing the gun. That suspect was detained and cooperating with officers, police said Sunday morning.

The first person, according to Manley, to have fired a weapon in the incident appears to have been the driver of the car. Manley said those shots came after the driver said Foster pointed a weapon at him.

Manley confirmed on July 26 that one shooter was the driver of a car and said the other was in the crowd and may have opened fire on the car as it drove away.

Investigators are trying to determine what charges the two shooters may face.

Manley said detectives are reviewing "precise actions" of those involved, investigators are coordinating with Travis County prosecutors, and the two people who fired shots have been released "pending further investigation."

Chief Manley encouraged anyone with photos or information about the incident to come forward and report it to APD.

On July 30, APD again appealed to the public to come forward with witness statements, video and photos. Anyone in the immediate proximity of the vehicle who witnessed the incident is asked to contact Crime Stoppers anonymously at 512-472-TIPS or email homicide.apd@austintexas.gov.

Any business in the area with visible cameras that has not been contacted is also asked to reach out through Crime Stoppers or email.

Police said they can definitively say no one involved in the case has any connection to law enforcement agencies, including APD.

"We have not released any suspect or witness information during this active investigation," APD said in a statement on July 30. "This is done to minimize external influence that could obstruct witness and suspect testimony and impede future legal proceedings. For this reason, we cannot confirm any names, nor do we condone the publication of unconfirmed names."

KVUE's colleagues at "Good Morning America" interviewed Sheila Foster on Sunday morning. She said her son, Foster, was the man killed in the shooting. She said he and his fiancée have been participating in the protests for quite some time and were downtown Saturday night.

In a video posted to social media taken by journalist Hiram Gilberto, multiple gunshots could be heard at what appeared to be the same intersection where the incident happened.

KVUE spoke with witnesses who were at the scene of the incident when it occurred. Haven Trahan, who said he's been part of the groups protesting in Austin since the demonstrations first started, said a car was trying to get through to Congress Avenue as the crowd marched down that road.

"And that’s when this car on Fourth Street decides that they can’t wait any longer or that they just want to mess with us, I don’t know which. And he floors it, turning right down the street at us," Trahan said.

Trahan said that is when Foster confronted the car, before the shooting happened.

"Garrett Foster died protecting us, not just the protestors, all of us. He was out here, day in and day out," Trahan said.

James Sasinowski, who goes by "Sass," also told KVUE a car drove aggressively toward the crowd, trying to turn onto Congress Avenue from Fourth Street. Sasinowski also said he believes he saw the shooting happen.

"And then I turn over and I see his arm just like, extended fully out of the driver's window with the handgun into the crowd. And I watched him make several more shots. I saw the flashes," Sasinowski said.

Sasinowski also had a message for his fellow protesters.

"Just keep fighting, that's all I got to say. You know, there's – take a look out. There's all sorts of organizations right now," he said.

On Sunday morning, Austin City Councilmember Greg Casar and several candidates up for elections in November spoke out about the shooting.

A vigil will be held for Garrett Foster at 7 p.m. Sunday at Fourth Street and Congress Avenue. A memorial fund has been set up for Foster that has already surpassed its goal by several thousand dollars.