The mayor also referred to the governor's order to limit ballot drop off locations as "desperate." 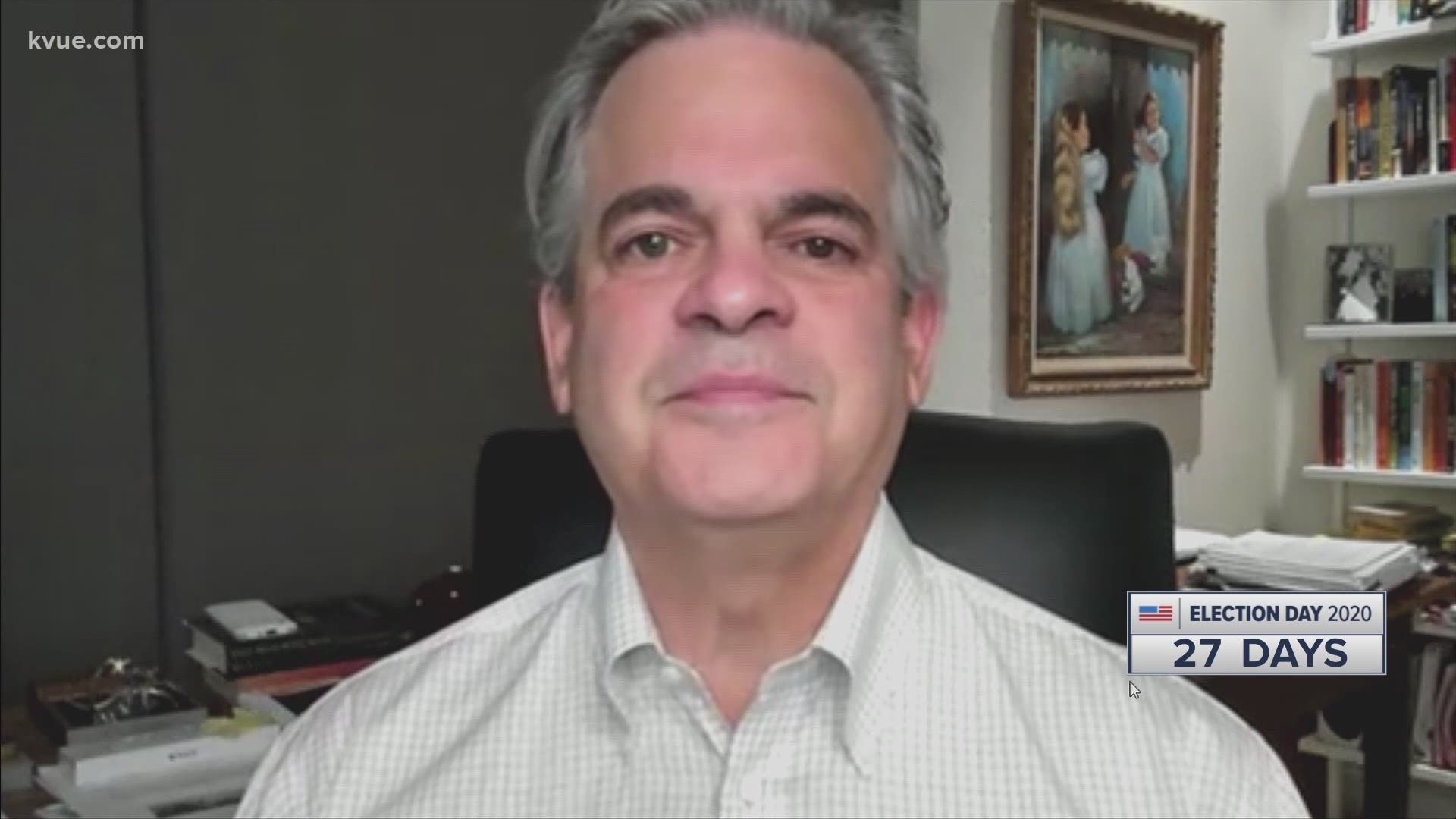 AUSTIN, Texas — Gov. Greg Abbott announced he plans to open more Texas businesses soon, hinting at the possibility of reopening bars. With Election Day less than a month away, the governor also issued an order that limits ballot drop-off locations to one per county.

Austin Mayor Steve Adler joined KVUE Wednesday to talk about these moves from Gov. Abbott. Here's what he told KVUE's Yvonne Nava in a Q&A.

'Cheers!' Gov. Abbott tweets more openings on the way. Could bars be next?

Question: The governor said he's planning on more reopenings, hinting at bars reopening. So what are your thoughts on that?

Mayor Adler's Response: "Well, it's a concern because cities across the world seem to be doing well until they open up bars. We did that here back in May, and that's the last thing we opened up before we had to shut things down. If the governor does that, I think it's really important that he does it with certain parameters. What we know is that masking and social distancing work. So we have to be able to take bars into account like restaurants. If we open up bars, people should be eating and drinking only at tables. They shouldn't be milling around. We shouldn't have people congregating at a bar. We shouldn't have any dancing. So my sense is that if we're going to do that, we have to make sure we're also being responsible. And we put it in the parameters that give it the best chance to actually work and stope protect the opening of our schools."

Question: Gov. Abbott announced he's limiting ballot drop-off locations to one per county. We have in Travis County more than one million people. What do you think the impetus is behind the governor's decision?

Mayor Adler's response: "I watch those efforts around the country trying to curtail or limit people's ability to vote. To me personally, it feels desperate. I think that that the Republicans are beginning to see numbers in Texas that show they're losing and this is what's left to them. I think it's unfortunate. There is no security risk. In Houston, they had 12 locations, a bigger county than ours in Harris County, and they limited them to one as well. But I'll tell you, at the end of the day, everybody needs to vote. And whatever happens, no matter how hard it is, no matter how difficult it's made, we need to vote, every one of us. And we have to vote in such great numbers that there can be no chance of a mistake."

Mayor Adler's response: "Well, I think we've been historically asking way too much of our police. It's not necessarily the appropriate thing for our police to be are our social workers and our mental health first responders. This is a conversation that's been going on in our community for the last few years. We've had too many mental health disturbance calls go bad. So having mental health, first responders, folks that are that that that is their profession, able to be able to respond to divert 911 calls that call for a mental health response to mental health professionals is something that I think is going to free up time for our police officers to be able to spend on crime. So I think it's something that's going to keep the city safer."

Question: There's still a lot of concern about Austin's homeless situation. We get a lot of inquiries every week. And, you know, I've driven around the camps along Highway 183, and to me at least, they look the same to me now than they did last year. So I am wondering, what's the long-range plan here?

Mayor Adler's response: "Well, certainly we have to do a better job of managing shared public spaces. I'll tell you, the coded epidemic stepped into the middle of the plans that we had. It made it difficult for us to be able to to to make sure that people who are experiencing homelessness that need their medicines are actually getting their medicines. The hotels that we were buying or renting in order to be able to move people off the streets and out of tents and into homes has been disrupted as we move people into isolation facilities for COVID. So we need to do a lot more work with the people that are in tents and out our streets that we have a plan. We're bringing in more partners. I'm still confident that we're going to be able to end homelessness in the city. But with the virus, our emphasis has been on making sure that people are safe and don't have the virus. And we've done that well. Austin, unlike many other cities in the country, has not had outbreaks and clusters among our communities experiencing homelessness. And that's taken a lot of work. But that's what's been the emphasis."

Question: And now that we're in October. You know, many families making plans, preparing to celebrate Halloween, possibly trick or treating. What kind of precautions is the city taking to make it safe for everyone amid this pandemic?

Mayor Adler's response: "Well, it's still hard because the virus is still real. You don't have to look much past the White House to see how that virus can get anywhere and how one infection can get out of control. So right now, the city will be is following the CDC guidelines with respect to Halloween. We're going to be coming out with more specific guidelines here the next week or so. But generally speaking, you know, it's much better to have people outside than inside. It's better rather than sending children from home to home to home. And it'd be better to hide candy in the back yard out of like an Easter egg hunt or to get a pinata in the household, break open a pinata. Small groups outside are still best, so parents still have to have to watch and be cautious. But right now, the CDC guidelines on Halloween, we'll be following."