Company responsible for Bastrop oil spill has history of violations

The company responsible for the oil spill in Bastrop has a history of problems in Texas, but never one this big. 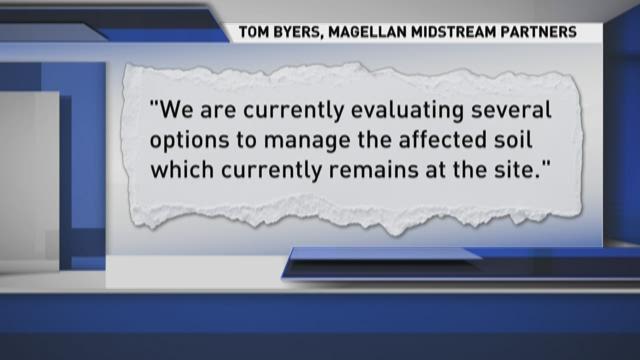 The company responsible for the oil spill in Bastrop has a history of problems in Texas, but never one this big.

They’ve paid out more than $850,000 in federal fines over the last decade.

At least 50,000 gallons of oil pooled in Bastrop County dirt July 13 when a construction worker hit the below-ground fitting on the Magellan Longhorn Pipeline.

Even though the problem is fixed, cleanup is ongoing.

This is where Louis Moncivias found his environmental watch.

“I went to Standing Rock and that little fire underneath me as a lot of people did. We learned a whole bunch about the gas pipe lines there and fracking. When I left from that point on, when I left there, Facebook and my Facebook friends has been a big influence on me to continue to come here to do this,” Moncivias explained.

Moncivias uses aerial video and creates a running update online. He brings in donations from environmental groups and other activists.

It draws enough attention to bring out controversy.

“I have had several death threats. I have had a scalping threat,” said Moncivias.

Those who oppose him posted criminal records online.

“I paid my debt to society,” he said.

The KVUE Defenders dug through the Magellan's records. Lawsuits are spelled out in the company’s financial records and a 2017 EPA settlement says the company will pay out $2 million for three major spills.

One of the spills was in Texas City where 482 barrels of gasoline impacted a local watercourse.

The incident has not had an impact on any water sources.

The release which occurred the morning of July 13th was not a “pipeline rupture”. It was caused by a contractor striking a below- ground fitting on Magellan’s Longhorn Pipeline with construction equipment.

We expect the cleanup to be ongoing for the foreseeable future and it will be conducted in compliance with all applicable laws and regulations. We are currently evaluating several options to manage the affected soil which currently remains at the site.”

Moncivias says he will monitor until all affected soil is removed.

“I will not stop. I will continue this journey,” said Moncivias.

The Railroad Commission of Texas is in charge of this cleanup. The state helps remediate hundreds of spilled oil sites each year.