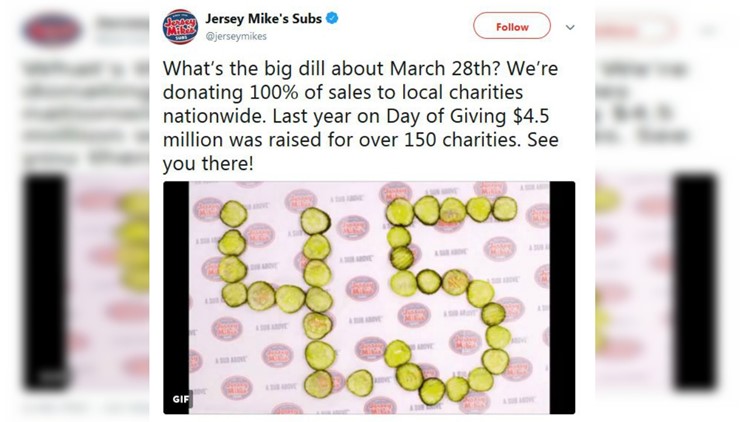 After receiving generous donations from customers all month long throughout Jersey Mike's company-wide "Month of Giving" fundraising campaign, local locations of the national sub chain have decided to take things a step further.

14 Austin-area Jersey Mike's locations will donate 100 percent of proceeds made on National Day of Giving, March 28, to support Helping Hand Home for Children, the company said.

One sub = a huge difference. See you tomorrow pic.twitter.com/PYO2cIx8S7

Join us Wednesday in making a Difference. 100% of sales donated to over 170 local charities. See you there! pic.twitter.com/7S8BNb4kuY

What’s the big dill about March 28th? We’re donating 100% of sales to local charities nationwide. Last year on Day of Giving $4.5 million was raised for over 150 charities. See you there! pic.twitter.com/tFQ2YB80hB

The promotion will be available all day during business hours on Wednesday March 28.

Since 2010, Jersey Mike's has raised more than $28 million for local charities and has distributed more than 2 million free sub sandwiches to help numerous causes.