The League of United Latin American Citizens of Austin is calling for Austin Police Chief Brian Manley to resign over Friday night’s killing of a Hispanic man. 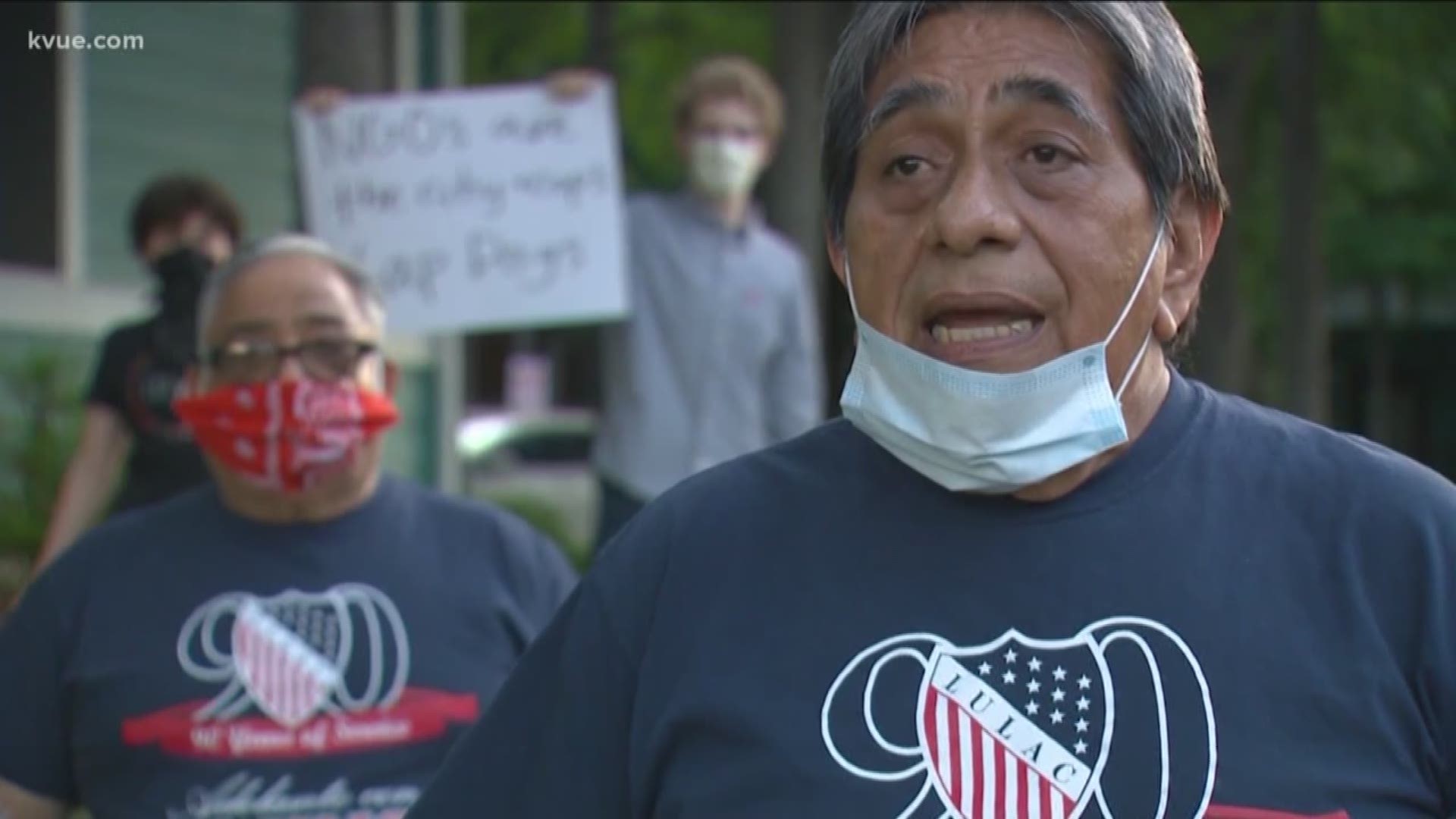 AUSTIN, Texas — The Austin Police Department is under fire after videos circulated online showing an officer shooting a man in southeast Austin on Friday night.

Some city leaders are calling for transparency and justice, as the League of United Latin American Citizens (LULAC) of Austin calls for the resignation of Police Chief Brian Manley.

A video shows the moment police shot 42-year-old Michael Ramos with a beanbag shotgun, before he got back into his car and started driving away. When he began to drive away, another officer fired his rifle.

Ramos was identified by city leaders on Saturday afternoon.

At a news conference on Friday night, Manley said the incident was the result of a 911 call in which a caller reported seeing a man in the parking lot of an apartment complex, doing drugs in a car and holding a gun in the air.

“Based on the vehicle that we have here and the people involved and the officers' knowledge of what's been taking place over the past week, that this incident may be linked to other incidents of burglary, as well as that evading in a vehicle yesterday that is still under investigation,” Manley said.

"I've seen the videos that are on social media, and I understand the concern that those have brought forward in our community,” Manley said.

He also asked anyone with more video or information to come forward and share it with police.

As of Saturday night, Manley indicated the police department still has not obtained a search warrant for the car that Ramos was in, and it is still unknown whether Ramos had a weapon.

On Saturday evening, protesters were near the scene, chanting, “APD are murderers.” That’s also when LULAC leaders held a news conference, calling on Mayor Steve Adler and the city council to demand the immediate resignation of Manley.

“We the members of LULAC District 12 are shocked at the blatant killing of Mr. Ramos,” said Gavino Fernandez Jr., LULAC District 12 leader. “These are too many murders under Chief Manley and enough is enough. ¡Ya basta!”

The shooting is also raising questions from city leaders.

“It is important and critical that the city manager and the Office of Police Oversight and Chief Manley seek and publish those answers as quickly and swiftly as possible so that we can get to truth and justice in this case,” said City Council Member Jimmy Flannigan. “There are some really important questions about what de-escalation tactics are being trained and asked of from our police officers and whether or not those actions are the right actions. And that's true even if Mr. Ramos had not died. That Mr. Ramos died means that these answers need to come right away.”

"Like many others, I've seen disturbing video of this fatal encounter," she said. "At a time when trust between APD and the community is at rock-bottom, we need a fully transparent and expedient investigation that pulls no punches in the pursuit of accountability."

"Michael Ramos should be alive," he said. "David Joseph, Larry Jackson, should be alive. APD has de-escalation rules. It has training. But those things don't seem to be enough. There will be an investigation, but that isn't good enough on its own. We cannot rest until we transform our systems."

“I’m very disturbed by the spectator’s video I’ve now seen on which Mike Ramos does not appear to threaten but ends up dead. There’s got to be a better way.  The use of force is the most potent and irreversible of a police officer’s tools and requires trust between officers and the communities they protect. We may not yet know all the facts and we need to before we pass final judgment, but we know what we see, people are hurting, and there are many questions. We must respond to this moment and also to the fear, anxiety and lack of confidence expressed by communities of color. I have told the Manager we need a quick and complete assessment of this shooting and then an immediate sharing of all relevant information with the community. This incident happens against the backdrop of investigations and assessments of the department that must also be full, transparent, concluded and reported. ”

The investigation will follow the same procedures as any other police shooting, Manley said, including the Office of Police Oversight, the Travis County District Attorney’s Office, as well as APD’s Special Investigations Unit, the Internal Affairs Unit and the Austin City Manager’s Office.

“I must emphasize that this is a criminal investigation to determine whether the officer’s conduct constitutes a prosecutable offense. Therefore, collection and preservation of evidence is critical, and every effort must be made to protect the integrity of the investigation. For example, we would not approve the release of certain facts before witnesses are interviewed.”

The District Attorney's Office said it is strongly committed to maximum transparency to address community concerns.

“I will approve Chief Manley’s release of body camera videos collected by police officers, as soon as is practicable. In this instance, I do not see how the release of these videos would compromise the investigation or any subsequent prosecution,” Moore said. "I assure the public that the Travis County District Attorney’s Office is deeply committed to a full and fair investigation, and we will take appropriate action as expeditiously as possible.”