The city's Public Safety Commission on Monday considered changing the rules on how it regulates coyotes. Some of the considerations include using coil traps that Austin Pets Alive! call inhumane. 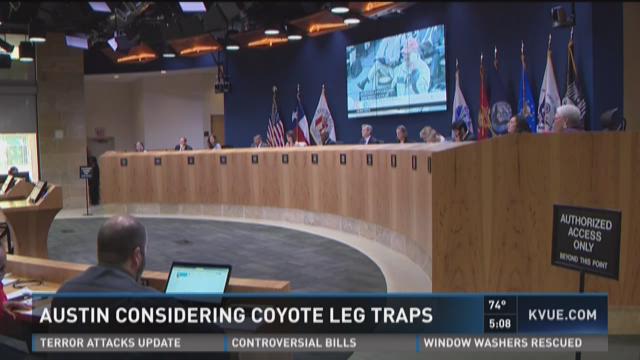 The city's Public Safety Commission on Monday considered changing the rules on how it regulates coyotes. Some of the considerations include using coil traps that Austin Pets Alive! call inhumane.

"The force of it is strong; it's probably about 150 pounds of pressure," said Chris Callahan, manager of Callahan's General Store.

It is currently illegal to use coil traps in city limits, but Callahan said some people do buy them.

The Public Safety Commission discussed allowing the Texas Wildlife Service to use a version of the coil trap in Austin. Council members Don Zimmerman and Ora Houston support using a rubber-coated version to trap coyotes.

"It's a rubber spring-loaded trap and I did put my fist into that trap and there's no way to call the trap in humane," said Zimmerman. "If a small animal gets into it, sure, he can probably cause a fracture."

"I think our biggest concern here at APA!, is they're saying they're putting these coyote traps out to catch the coyotes to protect our domestic animals, but we're catching domestic animals in these traps," said Lisa Maxwell, Development Director at APA!

Maxwell showed KVUE a case from last week where a cat named Freya got caught in a coil trap. She had to have several toes amputated.

"It took three days for Animal Services to get that cat out from under the house cat," Maxwell said. "This is already happening. If you make it legal, we're going to start seeing more of it."

Zimmerman believes preventing use of the traps is more about creating more government than protecting pets.

"I've heard some rumblings that there are people who want to create a separate bureaucracy and hire a bunch of new people to manage coyotes and in my view, that would be a huge waste of money," Zimmerman said.