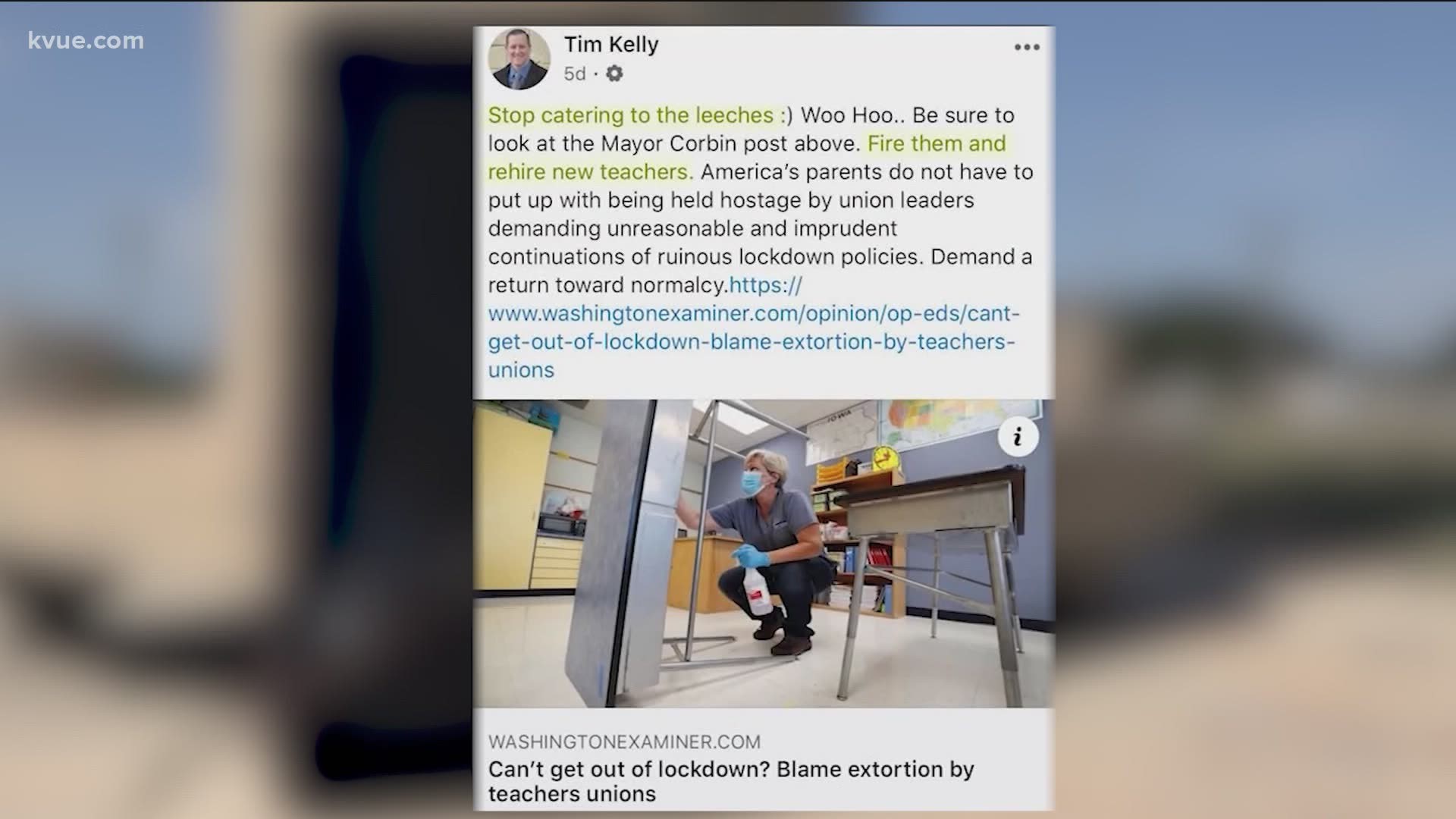 The item on the agenda specifically reads, "Discussion And Possible Action Regarding A Citizen Petition To Recall Councilmember Tim Kelly And The City Secretary's Certification of Results Pursuant To The Cedar Park Home Rule Charter."

Kelly came under fire last month after making a Facebook post sharing an article on schools reopening. The post said, "Stop catering to the leeches ... Fire them and rehire new teachers. America’s parents do not have to put up with being held hostage by union leaders demanding unreasonable and imprudent continuations of ruinous lockdown policies. Demand a return toward normalcy."

Kelly later made a second post, explaining that his first post was taken out of context, saying in part that had the "outraged people" read the attached article, "they would have realized that the post was in regards to leaders of teachers unions in other states and was not related to teachers in this community."

Later, Kelly was censured by the council with a 4-3 vote. There is no exact punishment for being censured, but it is a formality.

The censure hasn't stopped parents and teachers from petitioning to have Kelly recalled.

Credit: Luis de Leon
Jennifer Macklom, a Cedar Park High School teacher, stands next to a table she setup to have people sign a petition for the recall of Tim Kelly.

A website was recently made, calling for signatures on a petition to recall Kelly. The website states the petition needs 5,000 signatures.

Organizers told KVUE, as of Wednesday, it has more than 1,400 signatures.

Signatures have to be signed in person, on paper, so several residents have set up public tables for people to come up and sign the petition.

“We’re leeches for wanting to keep our children – students safe. We want to keep our students’ families safe, and if that’s a leech, then I claim being a leech. I’m a leech," said Jennifer Macklom, a Cedar Park High School teacher.

Other parents also showed their support by setting up tables.

“Teachers are like the second parent," said Katie Ibarra, a Cedar Park resident. “To get the word out is really what it boils down to."

Credit: Luis de Leon
A petition table outside of a home in Cedar Park.

Councilmember Tim Kelly responded to KVUE's request for comment with the following statement:

"This recall effort is actually great news for our local candidates running against the incumbents who led the censure effort. With just 60 days remaining until early voting, radical activists – encouraged by the incumbents – are busy gathering recall signatures rather than knocking on doors for candidates who support these pro BLM/Antifa/Indivisible-ites on council. Therefore I strongly encourage this distraction."

Cedar Park Councilmember for Place 6 Dorian Chavez shared his thoughts on the censure in a video on Facebook posted Tuesday. He also provided KVUE with the following statement:

"The initial move by Councilman Mel Kirkland and Mayor Corbin Van Arsdale is purely political. This is not the first time Councilman Kirkland has tried to bring censuring or some type of disciplinary action to Councilman Tim Kelly or I for exercising our God-given Constitutional Rights. Councilman Kirkland attempted another special called meeting back on the 4/23/20 council meeting (at the 2-hour-and-55-minute council meeting video/mark) for falsely accusing us of breaking the law by attending a peaceful protest at the state capitol. He tried again with this current issue; but had the support of the Mayor because both of them have been in hot water after the July 23rd Hill Country News story on campaign finances. A story connecting them to a radical left group (Indivisible), that is also financially contributing to their campaigns. The story also sighted how they have accepted $1,000’s of dollars from developers. In addition, the mayor has been receiving much negative attention for his political move dealing with the Greg Kelly case. This was all happening days before they decided to divert attention away from them and onto Councilman Tim Kelly. You can see more details on a video I posted on my FB page last night."

Heatwave will get even worse before relief arrives

Fresh Plus grocery store vandalized after customer was asked to cover his face, manager says