Authorities said he recorded video of the deadly shooting of Ashli Babbitt. 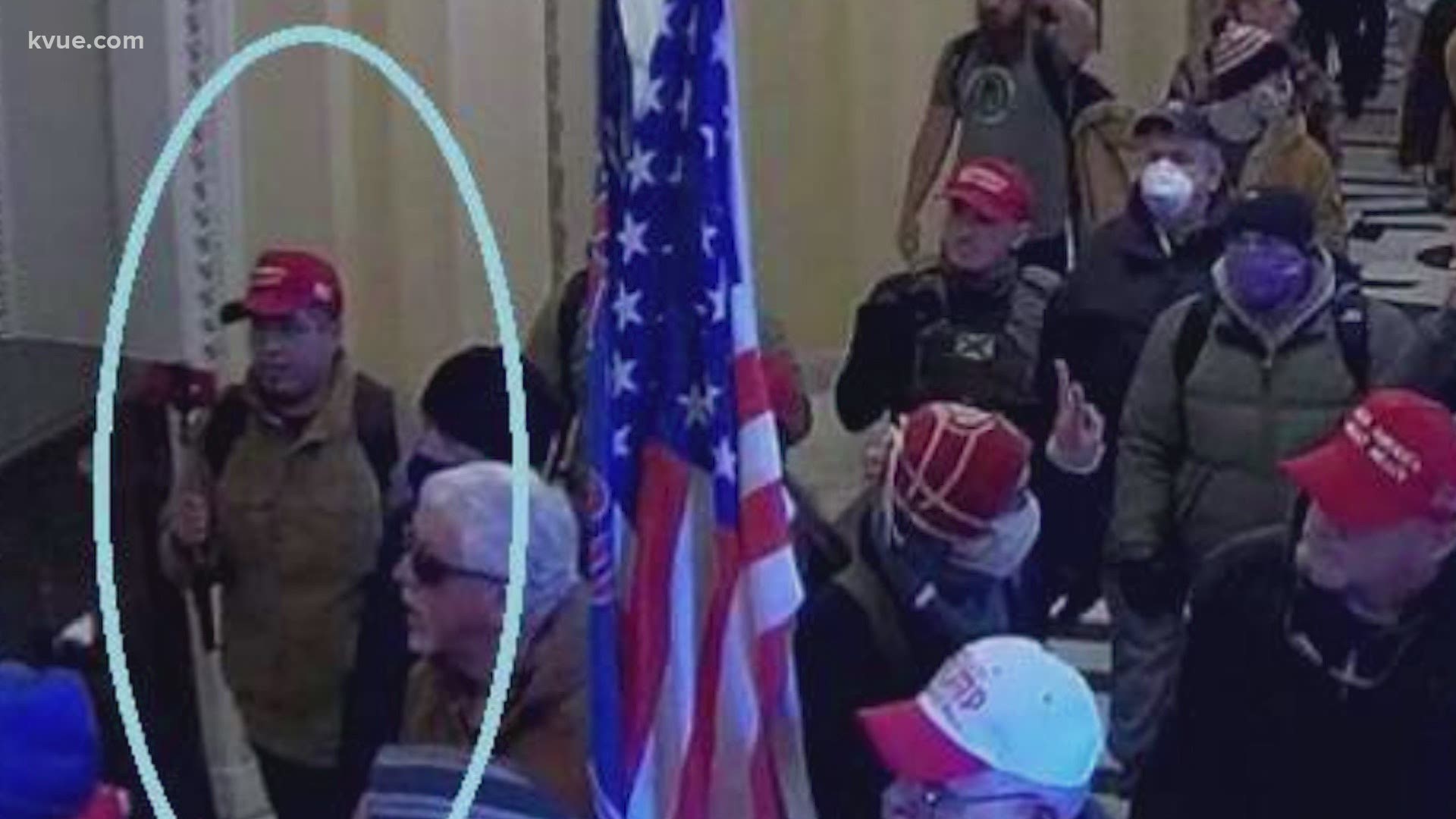 AUSTIN, Texas — A San Marcos man who worked for Infowars has been arrested in connection with the Jan. 6 Capitol riot, according to court documents obtained by KVUE.

A lawsuit states the investigation into Samuel Christopher Montoya started on Jan. 11, when a family member tipped off the FBI that he was inside the Capitol building and had recorded video of the deadly shooting of Ashli Babbitt. Babbitt, a 35-year-old Air Force veteran who lived in San Diego, was shot and killed by police during the breach at the Capitol.

After the Capitol riot, the San Marcos man allegedly showed the 44-minute video, in which he momentarily turned the camera on himself, to family members. According to authorities, they found the open-source video entitled, "Patriots Storm Congress Raw Footage Includes Execution of Ashli Babbitt," which was posted on Jan. 6. The narrator in the video allegedly identifies himself as "Sam with Infowars.com" and films himself moving from the Capitol grounds into the Capitol building with a crowd of rioters.

The FBI said at one point, Montoya turns the camera on himself and said, "It feels good to be in the Capitol baby!" This is a screenshot of that moment:

Credit: FBI
Samuel Christopher Montoya allegedly shot a video of himself inside the Capitol during the riot on Jan. 6.

KVUE has edited the photo because the identity of the second man is unclear and it's unclear if he has been charged yet.

The lawsuit details statements the video recorder makes, including at one point when he states, "I’m sure these officers are scared, but we’re here, we’re here to just show that we’ve had enough. We’ve had enough.”

At another point in the video, Montoya allegedly said, "... here we are, taking our – the people’s – house back!”

In the video, Montoya describes himself as a reporter or journalist, however, the FBI confirmed with the Capitol press office that he does not have press credentials.

Days after the riot, the FBI said Montoya was interviewed several times on Infowars to recount what he saw inside the building that day. During the interviews, he is identified as "Sam," a video editor with Infowarsstore.com. During one interview, he appeared to be wearing the same tan jacket he had been wearing inside the Capitol.

As the FBI reviewed surveillance video inside the Capitol, they found video of Montoya at various locations inside the building.

Credit: FBI
Surveillance video inside the Capitol shows Montoya at various locations inside the building.

In Central Texas, a Caldwell County man is facing multiple charges in connection with the Capitol riot on Jan. 6. He also allegedly filmed himself entering the U.S. Capitol during the riot and posted the video on YouTube. Joseph Cable Barnes, an Austin real estate executive, is also accused of being involved in the riot. Additionally, two Austin-area friends have been charged after being linked to the riots.

Lights Out': Austin businesses to turn off lights overnight to save migrating birds