FBI officials assisting with the investigation said they're looking into Santino William Legan's “motivation and ideological leanings" and collecting evidence. 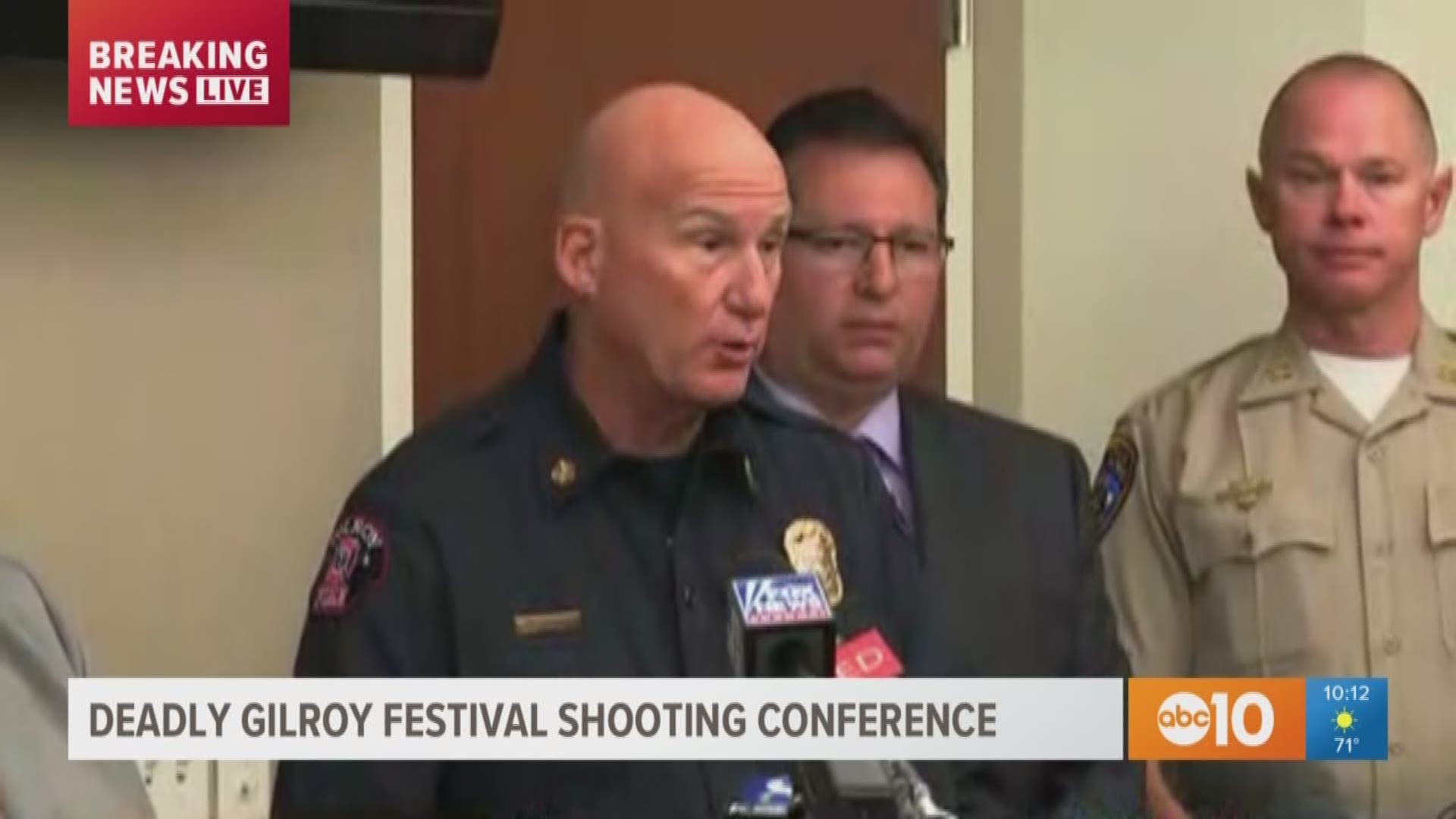 GILROY, Calif. — The gunman who opened fire on a crowd at the Gilroy Garlic Festival Sunday evening, killing two children, an adult and injuring at least 19 more, was identified as 19-year-old Santino William Legan, Gilroy police confirmed at a press conference.

According to Smithee, Legan once lived in Nevada, but is from Gilroy and was living there as recently as Sunday's shooting.

Initial reports of a second suspect have yet to be verified, Smithee said.

FBI officials assisting with the investigation said they're looking into “motivation and ideological leanings" and collecting evidence from a crime scene that is “much more expansive than we thought. It’s across many, many acres.”

Law enforcement searched the home in which Legan was living as well as a car parked outside of the house before leaving with bags of evidence.

In a separate press conference Monday morning, officials at the Santa Clara Valley Medical Center (SCVMC) said there were 22 victims in the shooting sent to different hospitals in the area — three people were killed, and 19 others were injured. The victims are between 12 and 69 years old, but it's unclear how many of those injured were shot.

Of the seven victims at SCVMC, only five are still at the hospital, one patient was discharged and another was transported to Stanford Hospital, according to Maury Kendall, a spokesperson for Santa Clara County's Health System. Three of the victims still at SCVMC are listed in critical, serious and fair condition. The other two requested that their information not be released.

Six other victims with gunshot sounds went to St. Louise Regional Medical Center, but three have since been discharged. Eight others went to the hospital without gunshot wounds, but none were admitted to the hospital.

Smithee described the three victims killed as 6-year-old boy, 13-year-old girl, and man in his 20s.

Among those killed was Stephen Romero, 6, who was described by his grandmother, Maribel Romero, as "always kind and happy and, you know, playful."

The Santa Clara County Coroner confirmed to ABC10 News that the 13-year-old girl was identified as Keyla Salazar. Keuka College, a small college in upstate New York, identified Trevor Irby as the young man killed in the shooting. Irby graduated from the college in 2017.

President Donald Trump said in the White House Rose Garden Monday that his thoughts were with the Gilroy community. "While families were spending time together at a local festival, a wicked murderer opened fire and killed 3 innocent citizens, including a young child," Trump said. "We grieve for their families, and we ask that god will comfort them with his overflowing mercy and grace.

"We reaffirm our national will to answer violence with the courage, determination and resolve of one American family. We will continue to work together as communities and as citizens to stop evil, prevent violence and protect the safety of all Americans."

The festival also generates tens of thousands of dollars every year, which are donated to local non-profits every year, Gilroy Mayor Roland Velasco said.

Velasco, who spoke in front of reporters Monday, said the that while the community will mourn the tragedy, they will get through it.

“The city of Gilroy endured a tragedy that a very long night — a very long night cannot erase," Velasco said. "Mass gun violence is an epidemic in the United States, and yet one never imagines such a thing could happen here in our beautiful community.”