Police believe the man ignited a dwelling made of sticks near the tower. 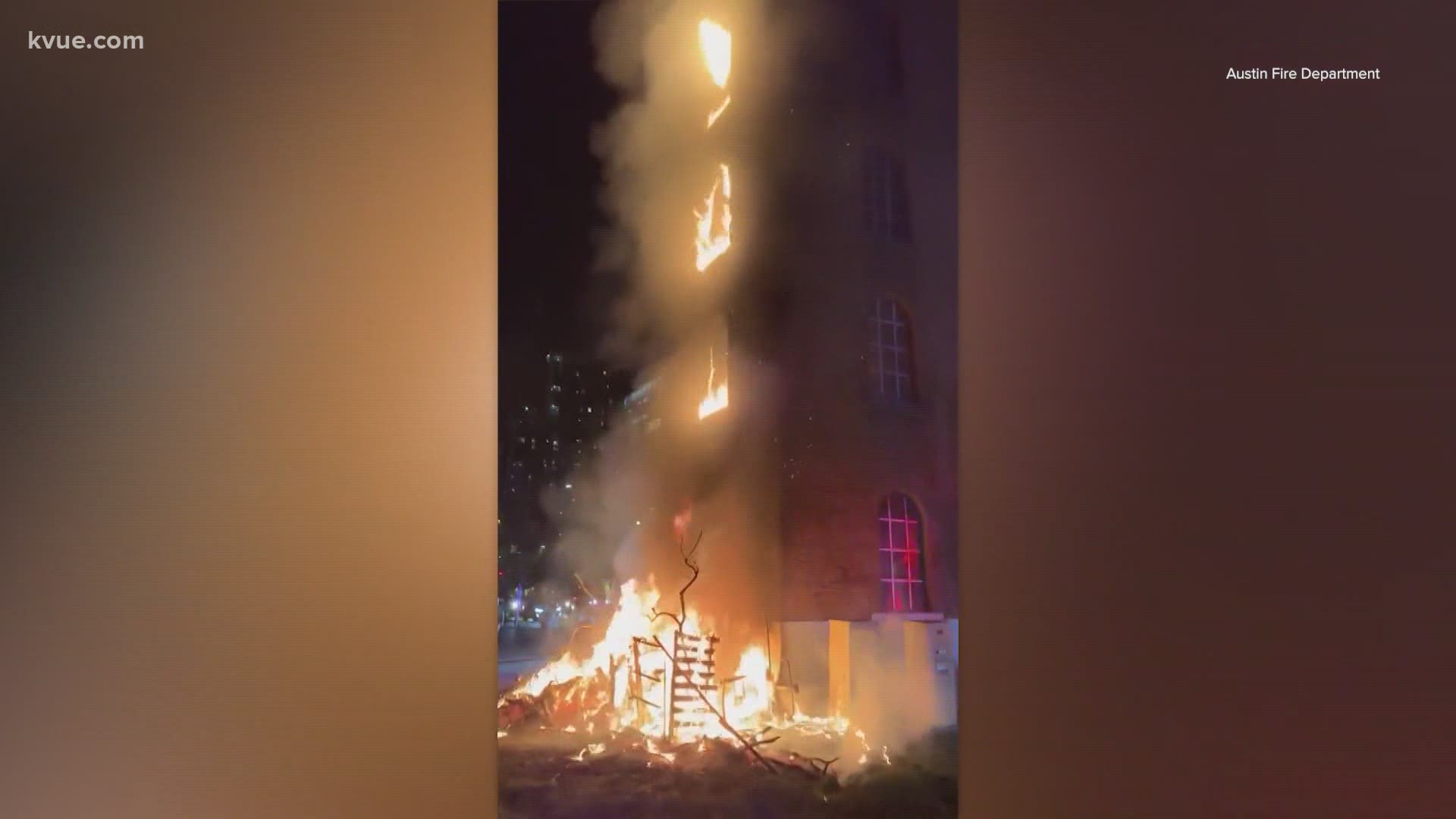 On Friday, Austin Fire Department officials said the incident was being considered arson and that they were searching for a suspect. Officials said suspect David Rosenblum, 58, was arrested later that day.

According to his arrest affidavit, the fire originated in a dwelling near the tower. It was made of sticks and other materials in the area and had been the primary or sole residents of an individual for several months.

An officer familiar with the area interviewed a witness who said the dwelling was built by a man known as "Kevin." The officer later asked the witness if he knew where his friend, the suspect, could be. The witness said Rosenblum had left prior to the fire.

Police reviewed surveillance footage from the area and saw a man wearing the same clothing as Rosenblum that night igniting the fire. The suspect can also be seen pushing his wheelchair across the street and sitting down next to the previous witness. Rosenblum is known to use a wheelchair.

Rosenblum was charged with felony arson. The first-degree felony is punishable by a prison term between five to 99 years in prison and a fine not to exceed $10,000. He remains in jail under a $15,000 bond.

AFD said the damage was mostly contained to the exterior and windows of the tower and the department ruled the cause of the fire "incendiary," or intentionally set. The damage is estimated at $12,000 to the tower and $200 to the personal content in the camp.

The Buford Tower was built in 1930 as a drill tower for AFD and now serves as a bell tower and landmark. It has been on the National Register of Historic Places since 2016.

Fire cause ruled incendiary, circumstances still under investigation. Damage estimated at $12k to the tower and $200 to the personal content in the camp.

This is what Austin’s iconic Buford Tower looks like this morning. Crews were busy putting out a fire last that spread from a nearby homeless camp. @kvue https://t.co/fsBganRCPm pic.twitter.com/nTkiAOhyCI

This was one of three fires from a homeless camp that got out of control in that 24-hour period, Austin Fire said.

Friday morning, fire crews responded to a separate fire at the State homeless camp on the Bastrop Highway. Damage was reported at four units but there were no reported injuries. The fire department said it doesn't believe this fire was intentional.

The third fire broke out at a homeless camp located in the 1100 block of S. Interstate 35.

Crews also responded to eight homeless camps that were violating open burning guidelines. A fire is in violation of the city's guidelines when it's within 25 feet of a building or it's happening in a green space or greenbelt. Those violations included camps in the 5900 block of East Riverside Drive and the 400 block of Interstate 35.

AFD told KVUE that "these are becoming more common."

After the Buford Tower fire, Austin City Councilmember Mackenzie Kelly said she was "astonished" by makeshift campsites next to the tower. She urged Austinites to vote in favor of Proposition B in the upcoming May 1 election, calling it "a public safety issue."

Walked by there earlier today with staff and was astonished looking at the makeshift camp sites that were right next to the Buford Fire Tower. This is unsafe, unsanitary and ridiculous. Vote in favor of Prop B, y’all. It’s a public safety issue. #atxcouncil https://t.co/Q5xgm5iNfK

The proposition asks voters whether to reinstate the City's ban on homeless camping and was added to the May ballot after a successful petition.

Mayor Steve Adler responded to the fires Friday morning, saying the city needs to focus on housing the homeless.

"If that same fire happens in the woods to those we've forced to go back, as some are asking, people may well die," Adler said. "This fire was horrible, as was the one last night at the Governor’s Camp Esperanza. Let’s get people out of tents everywhere. Let's actually get people housed, not just hide them.”

Local Democrats have launched a campaign against the measure, saying it would be a step in the wrong direction for people experiencing homelessness in Austin. Mayor Adler has said he believes the vote will be "close."

Councilmember Katie Tovo also released a statement about the fire.

"This past year, I have elevated the concerns related to fires in the area and other activity along the hike and bike trail to the City Manager," said Tovo in a Facebook post on Friday. "It is my understanding that a suspect in last night’s fire has been identified, and I await a full investigation to understand the circumstances leading to this event."