'It was like being victimized more than once,' says beaten Statler employee after attacker made bail twice

Jonna King, 27, was beaten with a fire extinguisher and carjacked by a total stranger following a shift at the Dallas hotel. 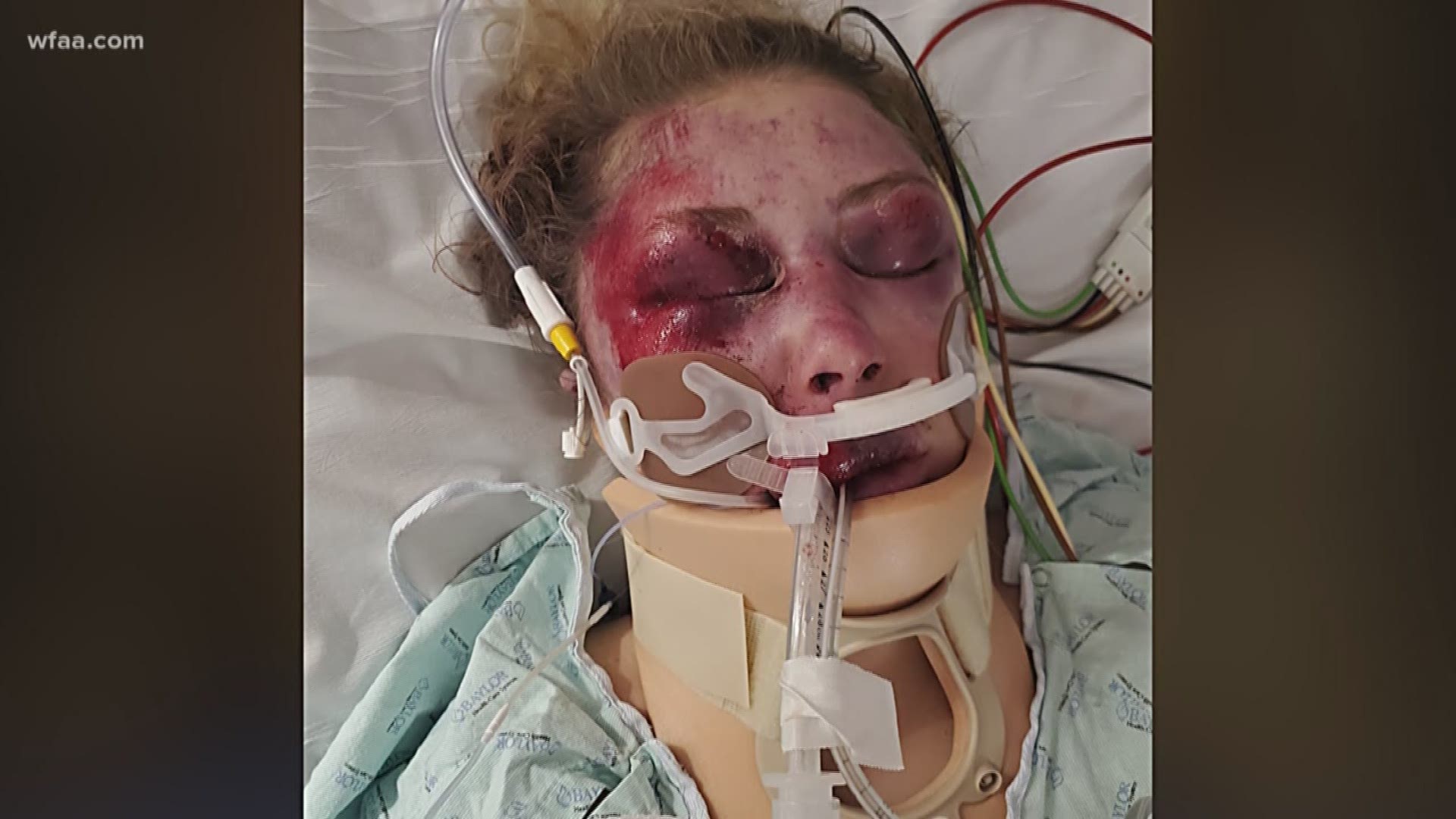 DALLAS, Texas — A Statler Hotel employee who was beaten with a fire extinguisher and left for dead in late September is opening up for the first time about the gruesome attack that changed her life.

But what's worse, she says, is dealing with the reality that her accused attacker was given an affordable bond considering he was previously convicted for aggravated assault with a deadly weapon in 2014.

On September 21st, 27-year-old Jonna King was leaving work at the Statler Hotel when police say she was approached by 25-year-old David Cadena.

King was a waitress inside the hotel, and working two jobs at the time. On other days she would work as a dental assistant. King and her husband, a police officer, just had a little girl and welcomed the extra income.

"He beat me so bad that there is a good chunk of my memory missing."

As King left work that night, police say Cadena approached her in a nearby parking garage on the lower level as she headed to her car.

An arrest affidavit said that Cadena got in King's car and drove away after the attack.

However, he was apprehended after crashing on an upper level.

The affidavit said that Cadena was in the driver seat of the car around 4 AM in the morning. Court documents show he was intoxicated and became combative with emergency crews that arrived on the scene.

King said she'd never seen Cadena or met him before. It's not clear why he may have singled her out.

"It's just weird that someone would look at a complete stranger and say, 'You. That's what I'm going to do.'"

Credit: King family
Photo of Jonna King in the hospital after the attack.

But the words simply don't do those injuries justice. King said she doesn't remember much after getting into the car.

"He beat me so bad that there is a good chunk of my memory missing," King said.

Credit: King family
Additional photo of King after the attack.

King had severe swelling and bruising on the right side of her body and to her face.

She was intubated and in a coma for two days. In total, she spent five days in the hospital.

King told WFAA that she remembers waking up in the hospital and being unable to see. Her eyes were swollen shut.

"It was very frightening," King said. "They asked me what happened, and I had no idea why I was there."

Thankfully, King expects no serious long-term effects. However, over a month later she said that she's still having concussion-like symptoms.

King said she gets dizzy still, her right leg doesn't function as well as before, and that it's difficult for her to hold and write with a pen.

Some of her bruises are still visible on her face, and King added that her hip along with her elbow are still tender.

"When I was first able to look at myself in the mirror, I remember thinking how I felt was exactly how I looked," King said. "It was really bad."

Credit: King family
Photo of Jonna King recovering at home after the attack.

King, regardless of how bad her injuries looked, told WFAA that the thing that pierced her the most is the fact that Cadena was able to afford bail twice since the attack and is living freely.

After Cadena was arrested, he was charged with aggravated assault with a deadly weapon.

His bond was set at $20,000. Defendants usually only pay 10 percent of their bond amount, so Cadena was able to make bail within a day.

Earlier this month, investigators added a robbery charge to the case and re-arrested Cadena.

This time, his bond was slightly raised to $25,000. Cadena was able to post bail within a few days.

A bond is not meant to be set as punishment. However, judges can take a defendant's criminal history into account and set a higher bond if they feel they are a threat to the public.

In 2014, Cadena pleaded guilty to two charges of aggravated assault with a deadly weapon out of Laredo.

He was sentenced to three years of probation as part of a plea agreement.

Based on that fact, King said Cadena's bond should have been higher.

"He obviously has a tendency of being violent, so the chances of him being violent with someone else is high," King said.

Both of the part-time magistrate judges, Peter Graham and Stephen Feil, did not respond to WFAA for comment when asked what factors were considered in setting Cadena's bail.

Right now, Dallas County is in the middle of a federal legal battle with the ACLU after the organization alleged in court that the county hands out pre-set and financially unfair bonds to defendants.

On their website, the organization said that Texas, "counties lock thousands of people away each year as they await trial simply because they cannot afford to pay money bail."

The Dallas District Attorney's Office can file a motion to hold a defendant's bond insufficient and have it raised, but a spokesperson for the office told WFAA it wouldn't comment about Cadena's case.

The spokesperson did, however, tell WFAA that DA John Creuzot does want prosecutors and defense attorneys to be present at bond hearings.

At the moment, only an arresting agency can fight for a higher bond at an initial hearing.

"For many months now I have been steadfast in my belief that we need to change the way bail hearings are conducted in Dallas County. Prosecutors, advocating for the state, and defense attorneys, advocating for the accused, should be present during these initial bail hearings before the magistrate judges at the jail. By both sides being present, the judges will be able to make better, more informed decisions on the appropriate amount of bail and the conditions of bail that should be set.”--District Attorney John Creuzot.

King said her case should have been handled better, and that both magistrate judges failed her.

She wants those judges to see her hospital photos.

"I want them to have some sort of compassion," King said. "The fact that he bonded out twice a week or so apart makes me furious."

Credit: King family
King with her daughter after the attack.

Amidst her anger, King wants to publicly thank friends and family who have helped during her recovery.

She and her husband have not been able to work since the attack.

A GoFundMe page raised over $42K for them as they worked to get back on their feet and assess hospital bills.

The one thing that King said has rejuvenated her during this process, is being able to hold her daughter who is almost two-years-old.

While she wants judicial change, she hasn't forgotten that she is lucky.

"It has been a very traumatic experience," King said.

"But it makes you thankful for the things that you have."

WFAA reached out to David Cadena's attorney for comment but did not hear back.