In Austin, Battle Bend Blvd. and Suburban Drive come together at a 90-degree corner. Even with road changes, drivers have crashed into homes for more than 15 years. 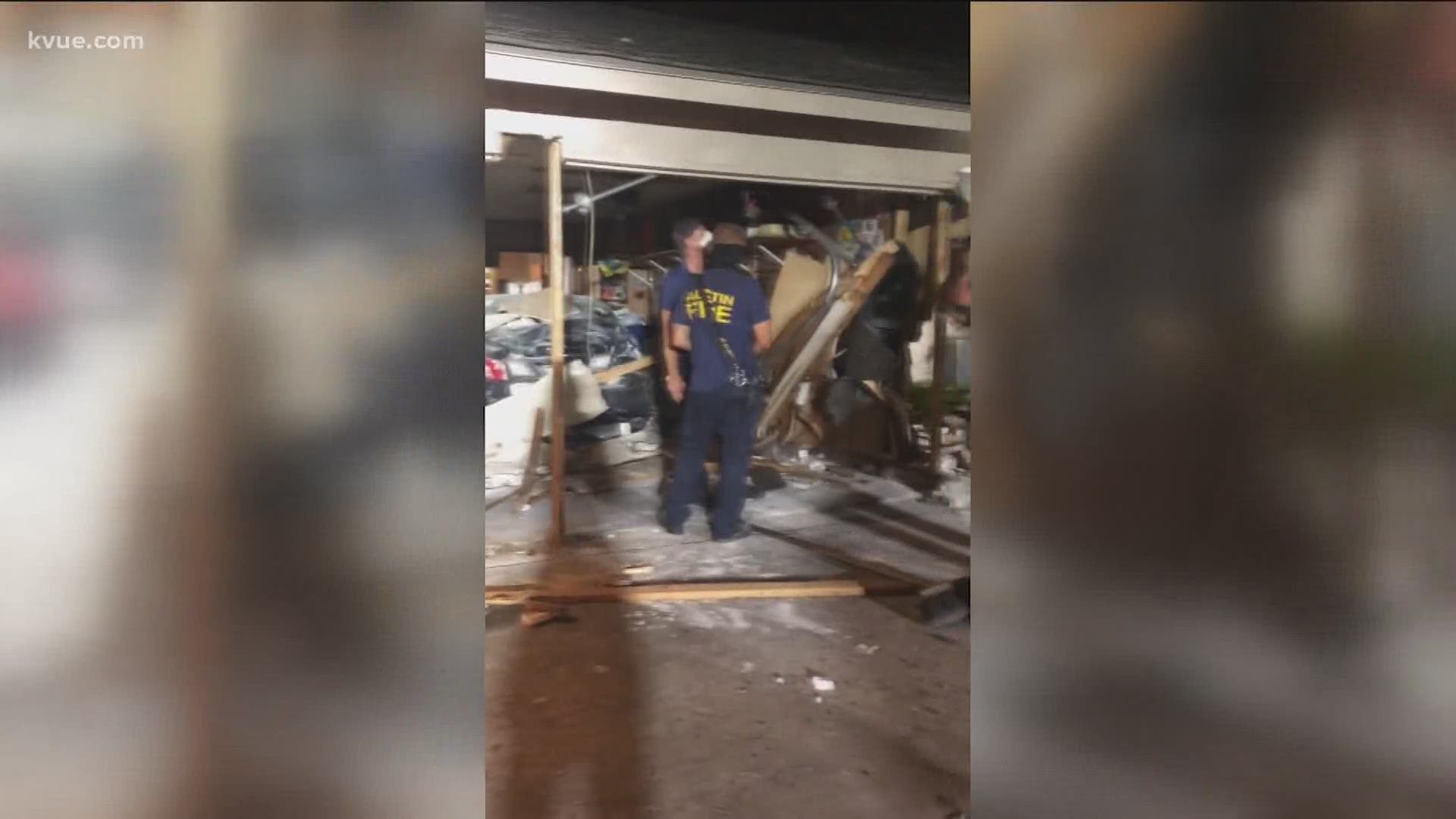 AUSTIN, Texas — Since 2004, Brandon and Kim Batiansila have called on the City of Austin to make the corner of Battle Bend Boulevard and Suburban Drive safer.

On Aug. 1, Austin police arrested a man after he allegedly stole a Chevrolet Envoy, crashed the SUV into the Batiansilas' home, drove away, ditched the car and ran off down the creek behind the Batiansilas' property. Luckily that night, Brandon Batiansila had left his own car parked at the end of his driveway after shooting hoops with his sons earlier in the day.

"[He] hit the back end of my car," Brandon Batiansila said. "Luckily the car was there because the trajectory to our children's bedroom. Luke was asleep in his bed that's against that wall."

Minutes later, @Austin_Police caught him and said he had priors. Tonight on @KVUE, the family explains how they have to “live defensively,” and the new measures they’re taking to protect their kids and their property. (A crash happens on here multiple times a year, slow down!)

"I woke up to the sound of my parents running through the house and screaming," Luke, who's 13 years old, said. "When I came outside I saw bricks everywhere."

Coincidentally, Brandon and Kim Batiansila's older son, Jack, is taking driver's education courses online right now. This corner, with so many crashes into mailboxes, garages and trees over the years, has proven to be better education than the classroom in some ways.

"I actually had headphones on at the time," Jack said. "I heard a screech, then a crash, and I thought they hit [the neighbor's] house or something over there. If you're driving along this corner, drive really slow and definitely don't speed."

Since the Batiansilas' and neighbors' advocacy, the City's roads department has installed temporary speed humps, a warning sign to take the turn at 15 mph with a flashing yellow light, chevrons and islands in the middle of the roadway designed to make drivers slow down as the lanes narrow. The speed limit on either side of the turn is only 30 mph. Neighbors next door to the Batiansilas' home say drivers have totaled cars parked in the street and taken out countless mailboxes, but no crash had been as bad as what happened at 1 a.m. on the morning of Aug. 1.

"We live that nightmare every night now," Kim Batiansila said. "We have done everything that we can. We put extra lights on our home. We put these massive boulders in front of our yard ... Our new rule is: [our sons] can't be in their bedroom if a car isn't parked [at the end of the driveway]."

After the Saturday morning crash, Kim Batiansila turned to Brandon Batiansila saying she wanted to move, but the family ultimately decided to stay in the house because of their love for the neighborhood and their neighbors. The Batiansilas moved to the house in 1999.

This week, the Batiansila family and the neighbors are investing in boulders weighing 4,000-5,000 pounds to protect their home from future crashes. Brandon Batiansila has been working with the City to improve safety on the roadways. He hopes they will be able to make the lanes narrower with new striping and/or widen the islands a bit so people are forced to slow down and swerve around them.

Kim Batiansila felt overwhelmingly thankful for Austin Police and Austin Fire Departments for their quick response and detaining the driver they believe crashed into their home.