White-nose syndrome has killed millions of bats in North America since being discovered in 2007. Weakening the fungus and disease is a top priority for bat experts. 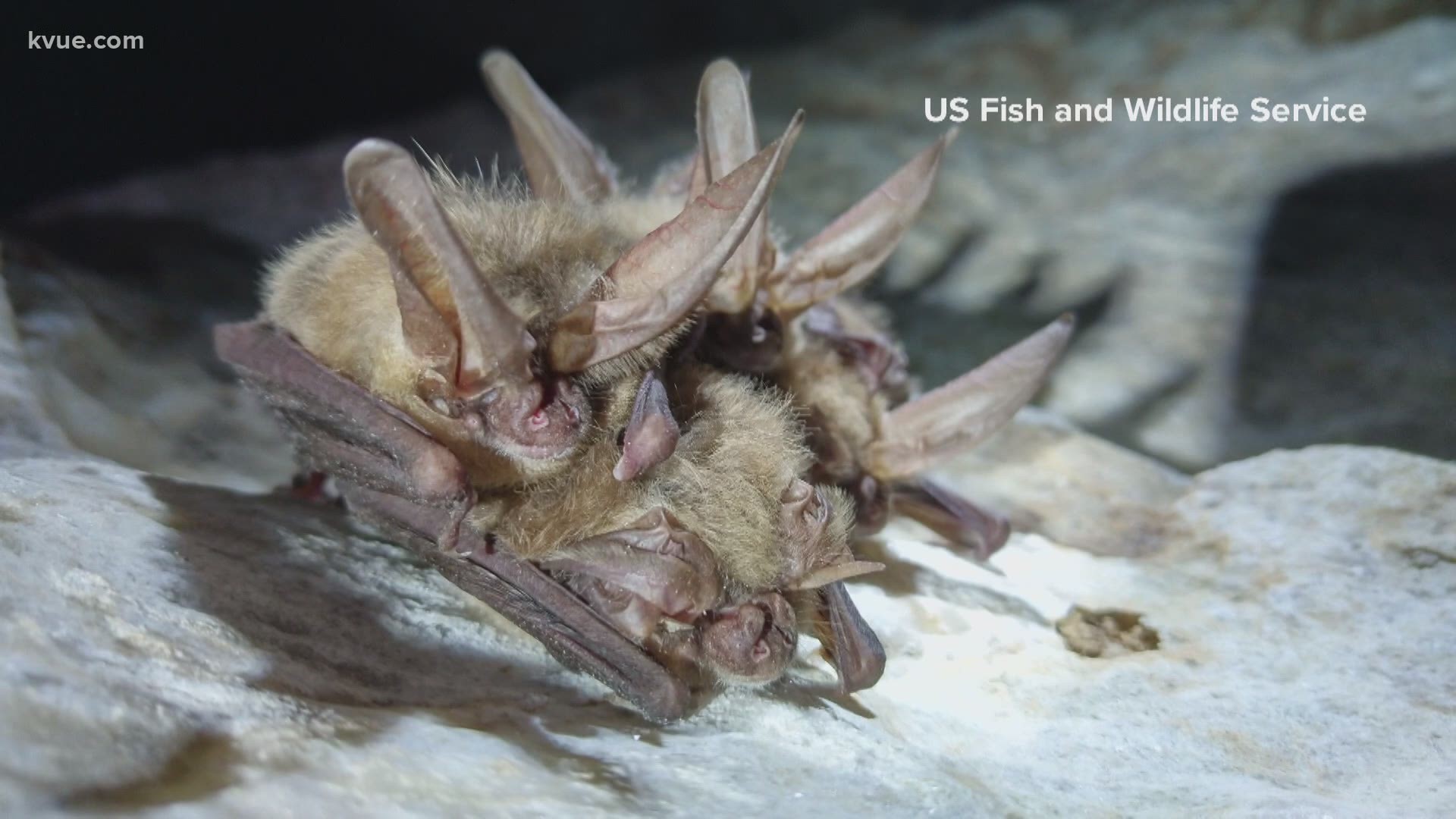 AUSTIN, Texas — More than 6 million bats have died across the U.S. since white-nose syndrome was first found in the New England area in 2007.

Prior to that time, the fungus and disease had not been seen in North America. Researchers consider it an invasive species.

"The chances of us eliminating or exterminating the fungus now that it's here are virtually nonexistent," Jeremy Coleman, national white-nose syndrome coordinator and regional wildlife disease biologist for U.S. Fish and Wildlife Service, said. "We have to figure out ways to manage the disease and manage bat populations so that the bats can improve their ability to survive in the presence of the fungus."

White-nose syndrome manifests as both a fungus and a disease. The fungus itself is not immediately harmful to bats, but if not taken care of within weeks can lead to disease attacking the bat immune system and membrane during hibernation.

Bats lower their body temperatures while hibernating during cold months. Hibernating bats will typically find caves for protection and rest. Coincidentally, white-nose syndrome thrives in cold, damp environments like caves. According to Fuller, lowering their body temperature also lowers the effectiveness of their immune system, essentially making them immuno-compromised.

"The fungus has an opportunity in the wintertime to attack this immuno-compromised – we'll call it, it's not really that what it is – but it's sort of an immuno-compromised animal – sensitive, susceptible animal," Fuller said. "Then it starts to slowly grow on the skin, and because the animals are reduced and it's only active maybe once or twice a month, it has no ability to fight off this infection or even groom it off."

The fungus and disease force bats to burn through the fat stores they've gathered in warmer months faster. Without the energy needed to continue hibernation, the bats may wake up early looking for food. Depending on the time of year, food may be scarce, leading to bats starving to death.

The fungus was first found in Texas in 2017. In February 2020, researchers found the first bat to die in the state from the disease.

"It was more nerve-wracking, I guess, for scientists and bat biologists that it was getting into Texas because we've got the greatest diversity of bat species," Melissa Meierhofer, a postdoctoral researcher with Luomus Finnish Museum of Natural History (BatLabFinland) and research associate with Texas A&M Natural Resources Institute, said. "We've got the largest colonies of bats in the world and Bracken Bat Cave. The fact that it got there, it can now rapidly spread in all different directions."

Many Texas bats don't hibernate, so are less likely to develop white-nose syndrome; however, because many Texas bats migrate, they can transmit the disease to other bat populations.

"[In Mexico,] there are hibernating bats that are there that may also be potentially susceptible to the infection or they may continue to move that fungus further down south into South America," Coleman said.

A research team from Oregon State University & UC Santa Cruz won our national challenge prize by conceiving of an aerosol spray to silence the fungus that causes white-nose syndrome without harming bats, the places they hibernate, or other living creatures. 📷: M. Moriarty/USFWS pic.twitter.com/TWIP4EldyQ

This week, USFWS announced the winners of a research challenge to find an idea for weakening the fungus. The winning research team came up with an aerosol spray to lower the fungus's activity.

"Caves are very complex," Meierhoff said. "Trying to treat that type of an environment and trying to get all the bats is nearly impossible ... At this point, [the goal is] now to target certain species of interest in certain populations and try to manage those in particular rather than try to stop the disease itself, because that's kind of an impossible goal."

Because the disease spreads about 125 miles every year, Meierhofer said the spread's speed will only increase now that the disease is in Texas.

"Now you have these spreaders, millions of them, that are just picking up that fungus and moving it around," Meierhofer said.

In some bat colonies, researchers have seen as much as a 90% or 100% reduction in size because of the fungus and disease.

"We have multiple species in North America that we consider to be susceptible," Coleman said. "There are many species that have not yet been exposed to the fungus that we know of, and so we don't really know how they're going to respond."

Coleman, Meierhofer and Fuller agree we may be witnessing evolution happen in real time.

"We are witnessing an evolutionary event where several species are forced to respond in a way that will demonstrate whether or not they will persist," Coleman said.

According to Coleman, there is no evidence to suggest the disease harms other mammals that do not hibernate, including humans. While bears and squirrels are hibernating animals, Coleman said the disease has not been found in those mammals either.

Coleman, Meierhofer and Fuller said people can contribute to finding a long-term solution to help bats get through this disease. If a person lives near a cave or space that bats use to hibernate, they can connect with government conservationists to give greater detail and familiarity of the cave. If a person recreates in caves, be sure to clean gear, clothes and shoes before and after entering and leaving the cave. Meierhofer even suggests changing clothes completely if possible, in order to limit the possibility of spreading the fungus. People can also build bat houses to help bats find sleeping areas that may not be caves in order to limit the spread of the fungus.

For the time being, researchers like Fuller are working in the Texas panhandle to test a vaccine developed between USFWS, U.S. Geological Survey and TPWD. He will be working on "bat time" for a round of vaccine field testing starting on Nov. 13.

Bats in Europe have been found with antibodies for the disease, suggesting bats there already went through a potential great die-off years and years ago.

"We might be experiencing that in the United States and Canada, where certain species will die out," Meierhofer said. "Some will be resistant, and they've shown some resistant populations, and others will then fill those gaps."