Austin's mayor joined KVUE Monday to speak on the water and energy crisis in Central Texas. 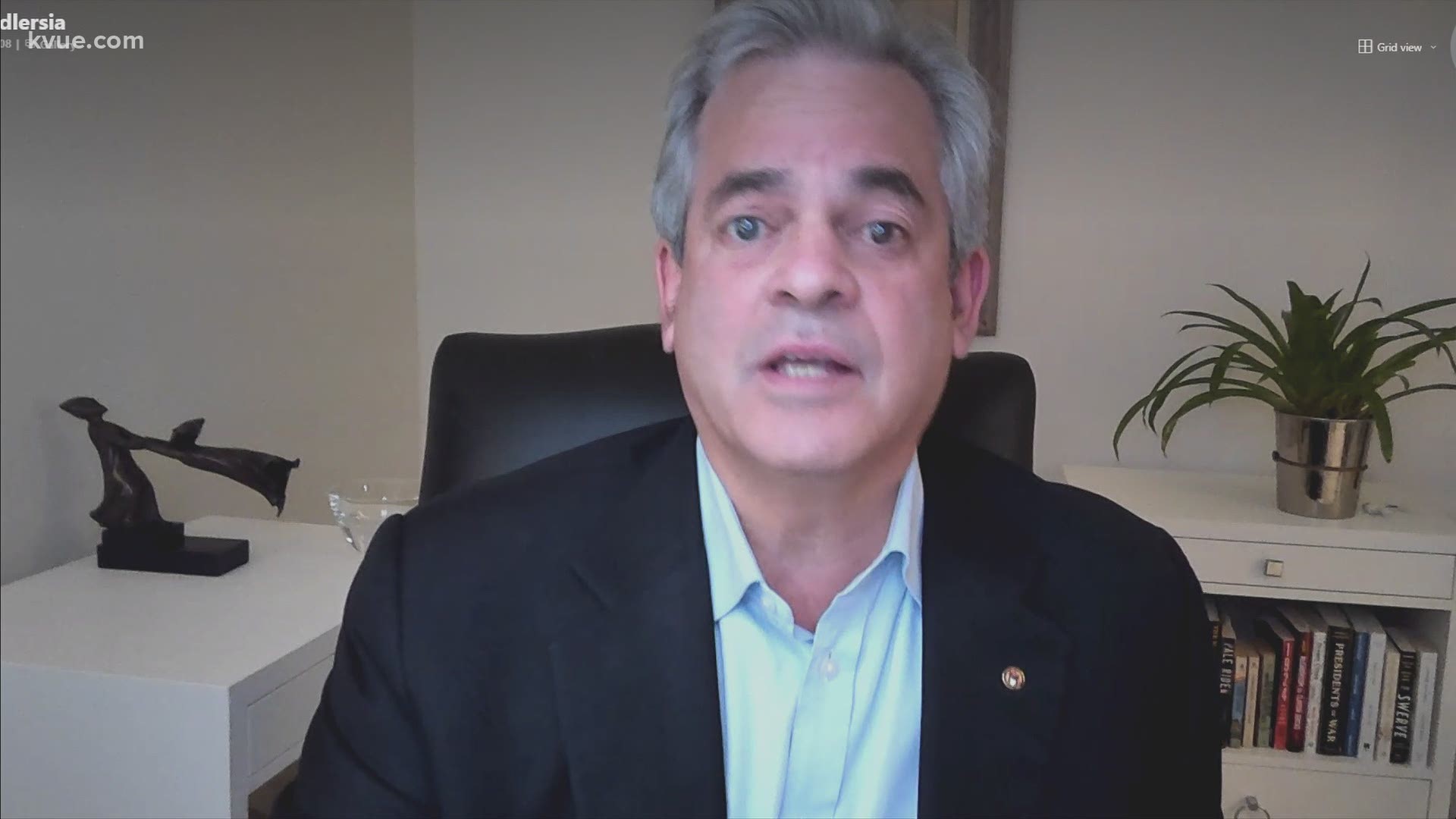 AUSTIN, Texas — Though it may be over now, much of Texas, including the city of Austin, is still reeling from the effects of last week's major winter weather event.

From losing power to losing water to going under a boil water notice, it's been tough for a lot of Central Texans.

Yvonne Nava: Mayor, hundreds of thousands of us lost power and water. Many are still struggling. How many days did you go without power and running water?

Nava: Viewer, Lucy wrote in. She said, "These extreme weather events are likely to be a reoccurring issue. This was not prepared for in the least, that goes for city, county and state." Lucy's right. How were we not prepared for the cold weather? It was forecasted well in advance.

Adler: What disrupted activities with the cold weather was the going down of the power grid system. The power grid system went down, we lost a water treatment plant. I think the power grid system went down because the distribution, the manufacturing of the production of energy all around the state was never weatherized at that low level. And I think that's because of a deregulated power system that doesn't provide an economic incentive for people to do that. And I appreciate the governor stepping forward and taking that responsibility, but also promising that the state legislature is going to fix that. I think that was the first of that that caused this chain reaction.

Nava: Our state's deregulated power system does not work. It's obvious. How vocal will you be and what do you plan to personally do, mayor, to make change?

Adler: Well, with respect to that, I've tried to be as vocal as I can, as early as I can. We have lots of questions about why we ended up here and how we make sure that we don't end up here again. That's going to be primarily a state legislative function. And I know that our delegation here from Central Texas is also single-minded focused on making sure that this doesn't happen again.

Nava: Now that it's already happened, what is the plan for the future so we don't go through this again?

Adler: I think the most immediate issue that we have is dealing with the continuing impacts of what we're still dealing with. We have people all over this city with broken pipes. We have people that are trying to find plumbers. We have people that are trying to pay for that work. We have people who lost their jobs, weren't able to work, don't have food. So the immediate tasks we have are making sure that we get water out to the people that don't, that are still under the water boil because they're not in the east part of the central part of the city. The city council has a special-called meeting on Thursday to talk about additional ways we can mitigate making sure that there's no impact for people on their utility bills, which there won't be with Austin Energy, making sure that the support for people to do home repairs happens, that we have those programs both at the City and we called nationally to get that special emergency federal action. And now we have also federal support, low-interest loans and things that could be brought to bear. We have to still deal with this crisis, because for so many people, it is still very much here.

Nava: As the lights come back on, many people are asking, "What impact will this storm have on my electric bill?" Joaquin asks, "Does the mayor have any power to help with the potential higher rates from Austin Energy?"

Adler: Well, as a matter of fact, the answer is yes. We're going to discuss it on Thursday. But people will not see here with Austin Energy a spike in their utility bills. We set a utility rate and that enables people to have a constant rate that they can count on and they know what it's going to be. And that just doesn't change. If the rate changes, we consider that every year, but people's rates are not going to go up. Now, there are other people in other parts of the state that have different power companies and pay a variable energy rate. And some of those people are seeing huge spikes on their bills. I understand there's going to be efforts to prevent that from happening to them, but we don't have that same issue here in Central Texas.

Nava: I know someone also wrote in asking, is there a perhaps a particular group or someone designated by the city, a group of individuals that they can help with basic needs in case of an emergency like this? Do we have those types of groups available to have in place for the future?

Adler: We have many of those groups in this city, many of them that are out working and the City helps support them. Meals on Wheels, the food bank or water organizations to support the Austin area. Urban League has been taking in donations and getting them to the people to ensure that they have a place to stay. There are many real supportive organizations that have really been helping.

Nava: The coronavirus numbers, we've been noting, they've been going down. But I mean, just so happened matter of circumstance, some people had to take in others, you mentioned you had to take in people as well. So does this maybe concern you? I mean, we have to do it to survive and to have power, bunk with someone who did have power. But does this concern you as far as the numbers and maybe a spike in numbers after this?

Adler: It does concern me. And, you know, it's there. A coronavirus was front and center. And as if that were not enough of a crisis, we that had the loss of energy and the resulting impact on water. Now that we've taken care, or at the beginning to move through those and see a resolution, we're back to COVID. And that is still very real. And I am concerned about that. The numbers that we've gotten over the last week have not really been reliable because it's been hard during this period of time to really keep track of where we were with hospital admissions and the like. We're beginning to accumulate that data again so we can get back to our dashboard. But people have to remember COVID is still with us and have to wear masks. They have to distance and we are redoubling and increasing and expanding the capacity to get people vaccines, because we're doing that at the same time.

Is it time for Texas to join a larger electric grid? State Rep. Jeff Leach explains why he thinks that's a bad idea