The mystery of who would try to kill the Treaty Oak made frontpage news around the country. 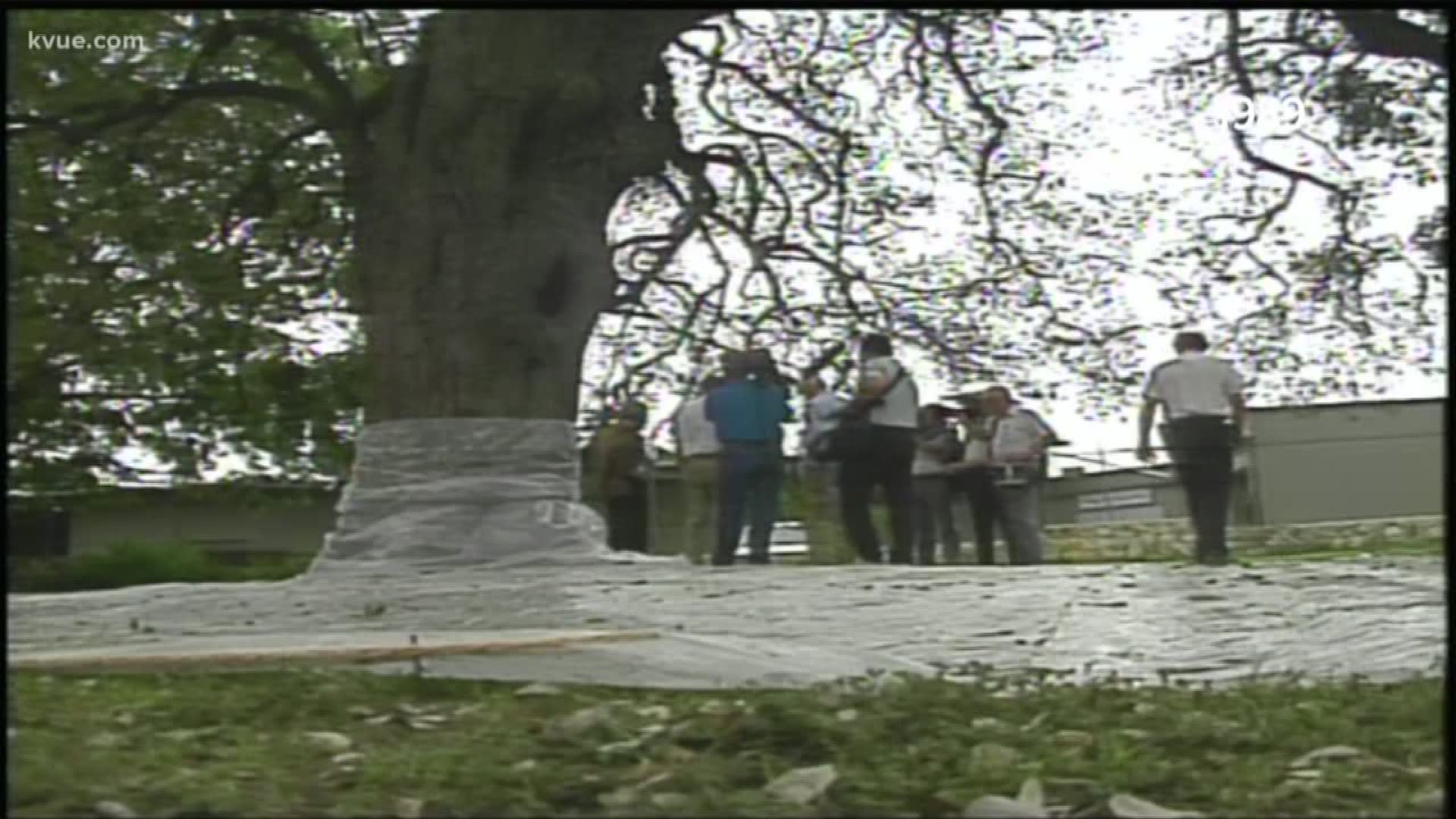 AUSTIN, Texas — It’s a mighty oak tree that carries the weight of history. Austin’s Treaty Oak, believed to about 600 years old, commands a small park on Baylor Street between Fifth and Sixth streets in Downtown Austin.

It called the Treaty Oak because historians say that treaties between Native American tribes and the Republic of Texas were signed underneath its towering branches, so long ago.

But not so long ago, this tree nearly died.

Its brush with death began in the spring of 1989. That’s when Austin’s city forester John Giedraitis discovered it was ill. There was a yellow ring of dead grass around the tree and new leaves appeared to be dying out.

A chemical analysis showed that a deadly herbicide had been poured around the tree, enough they said to kill 100 trees. Arborists and botanists from around the country worked to save the tree, installing a canopy over it and a sprinkler system to keep it cool in the summer. They also tried an experiment when they fed the tree a constant solution of sugar and water.

When the goddess took flight: The saga of Austin’s best-known statue

As news of the poisoning spread, there was an outpouring of concern across Austin, and beyond, for the tree that was suffering.

“The people of Austin responded with outrage and love,” Giedraitis said. “People came here and prayed, brought chicken soup; they left money, crystals. We spent a couple-hundred-thousand dollars, but we didn’t have to spend City money because H. Ross Perot, the Texas industrialist and former presidential candidate, called me and said, 'No matter how long it takes, just send me the bill.'”

The mystery of who would try to kill the Treaty Oak made frontpage news around the country. Network TV newscasts brought cameras to document an unusual case of attempted botanical murder.

Then a break came when Austin police arrested Paul Stedman Cullen a few months after the poisoning had been discovered. Police said Cullen told a friend he poisoned the tree. The friend went to the police and was given a secret recording device to wear, which captured his confession.

“It came out in his [Cullen’s] trial that he was in love with his counselor at his methadone clinic,” Giedraitis said. “He drew a magic circle at the base of the tree and would put in something of his own, or his spurned love, and the tree would die, or her die. So it was a sort of magic ritual, or a spell like that.”

Cullen changed his story at trial and said he didn’t do it. But a jury found him guilty and sentenced him to nine years in prison, though he served only three.

And as for the efforts and expense to save the tree? Success! It’s thriving again, although it still carries the scars from its near-death experience 30 years ago.

For former Austin city forester Giedraitis, saving the tree was about more than his devotion to his job and love for nature – it was personal.

“I met this wonderful girl and I was going to get married to her,” he said. “So, underneath the Treaty Oak, I knelt down and proposed to my wife in 1987. I chose this tree to propose to my wife and this guy [Cullen] tried to kill it, so it‘s pretty personal. But I’m still married, and the tree is doing great.”

During the time the tree was sick, Austinites brought home hundreds of seedlings from the Treaty Oak and planted them around the city. Some of the oak trees we see around Austin today may have had a very famous ancestor.