If you're new to Austin, you may not yet know about one of its most familiar holiday traditions. 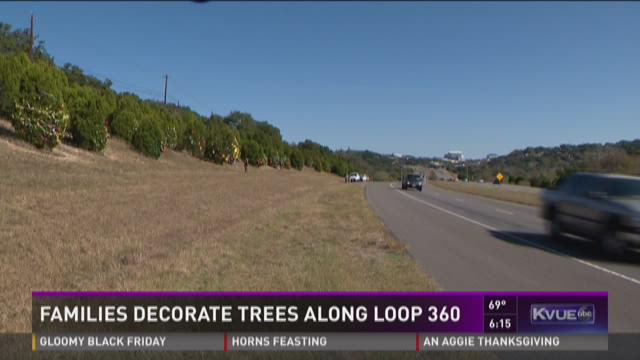 If you're new to Austin, you may not yet know about one of its most familiar holiday traditions.

Trees along Highway 360 are decorated with Christmas ornaments each year, and this Thanksgiving is no different. From rubber ducks and Pac-Man to Santa himself, each cedar tree has its own theme.

People have been visiting for years to not only decorate, but to snap photos of the spruced up area.

"It's just fun it creates a lot of memories that I will probably never forget,” Austinite McKenna Wappler said.

Her mother Cindy Wappler and family friend Linda Dryden have it a point to claim a patch of their own. They say it has been a family tradition since 2008.

“The boys were really small and we were holding on to them, so it’s fun to see them grow and look back at pictures and see where it all started,” Cindy Wappler said.

Dryden tells KVUE they have been able to connect with people from all over, stopping and asking questions about their décor.

"We've met people visiting from other countries that just try to figure out why we do this, we just tell them, it's Austin,” Dryden said.

“It makes me happy when I drive by and see all that, it makes me proud to be in a city--we do our own thing.”

But the most important reason why they visit is to honor the memories of family members who have passed.

They say after the holidays they pick up the items and re-use them again for next year.