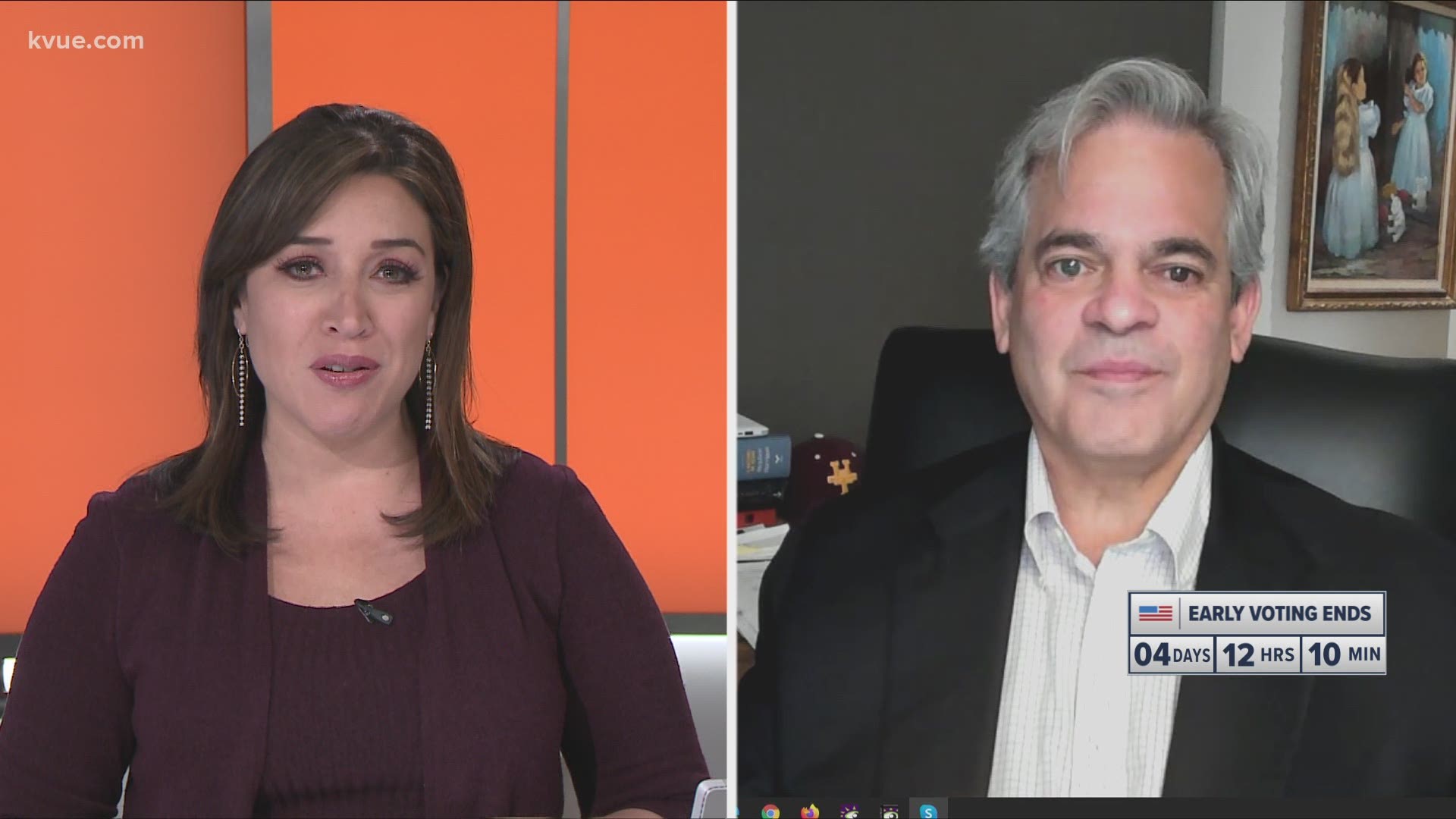 AUSTIN, Texas — As we near the holidays, health officials are urging people to stay vigilant and to stay safe as Texas starts to see a rise in COVID-19 cases and hospitalizations.

On Oct. 25, Texas reported nearly 3,800 new coronavirus cases and more than 200 new hospitalizations. As of Oct. 26, more than 5,000 people are in the hospital with coronavirus.

The mayor joined KVUE Daybreak Monday to talk about the coronavirus pandemic, as well as early voting in the 2020 election. Here's what he told KVUE's Yvonne Nava in a Q&A.

Question: The numbers are trickling back up in Travis County. I know we anticipated this considering it's flu season, but are you worried about the numbers increasing?

Adler: You know, I'm worried ... that's part of my job, I think. And all you have to do is look at El Paso to see what happens if people stop being vigilant about wearing masking. I think that they had 1,200 new cases in El Paso a day or two ago and the hospitals are getting so full there. They're talking about taking their patients and then moving them to other cities around the State. So we know what happens if it gets out of control. It gets out of control real quickly. Right now, we're staying pretty flat. Twenty-two hospitalizations in a seven-day running average. But we were down at 12, trying to get below 10 to get to the to the lower risk level. So, yes, I am concerned with Halloween coming up and Dia de Los Muertos this weekend. We just need everybody to remember that until there's a vaccine, we're going to have to be vigilant here.

Question: Now we had some viewers with some questions, and this is about just businesses here in Austin. And one viewer wrote in saying, "Mr. Mayor, when are you going to throw your support behind allowing bars to reopen in Travis County? How am I supposed to feed my family?" What would you say to that viewer?

Adler: Well, I think that everybody wants to continue opening up businesses, and we weren't schools to be able to expand so that more students can be there. We were trying to drive that number down below 10 new hospitalizations a day. And that would have made that direction real clear. We weren't able to do that. And we rose back up and doubled almost rose back up to 22 per day. Now we're going to see if it can level off there. But the county judge and I think continue to meet with the health officials, the scientists and the doctors to take a look at what we can be doing in this city. But the priority right now is to keep people healthy and alive and to keep schools open so that we can get more more students back into a classroom. That said, the greatest determinant of when we can start opening up businesses altogether is people's willingness to wear masks and social distance and to do it all the time, even with friends. Sometimes we relax when we're around friends in the evening and social gatherings. That's where most of the new cases are coming from. And we just can't let down our guard.

Question: The council passed the SAVES resolution, bringing $15 million to help bars and restaurants, music venues, child care centers. Can you tell us more about that?

Adler: Yes. You know, we got help from the federal government. We first put it to rental assistance and the food to make sure no one lost their home. And the families could still eat. But as we go through the process, we're trying to save some of the businesses, the iconic businesses in this city, music venues and those that if we lose would never be replaced. And the council put $10 million toward that and $5 million to help support and not to lose the child care infrastructure. We're now working with lawyers and CPA so that we can get, in essence, case management teams of experts to deal with some of these venues and places that help them put together packages so that they can not only survive the virus, but to be able to sustain their businesses hereafter. We need the federal government to act. That's where the real dollars are going to come from. They're just not enough here at the local level to do what needs to be done. I'm real disappointed that Congress has not acted in a way that will bring relief and and I continue to lean on them to lobby with mayors across the country because that's where the real assistance for restaurants and bars will come from.

Question: Do you feel like you're making some headway with that lobbying or where do you think it's going?

Adler: You know, I keep thinking it's going to happen any day. You know, we had the speaker of the house all but saying that she had reached an agreement with the treasury secretary, but then some of the senators said they wouldn't agree to what was being discussed. My sense is now it's not going to happen before the election. My hope is that at the election, we all send a message in that Congress gets their act together right after the election comes in with the package for cities.

Question: Speaking of the election there, there's only this week left to early vote. I know, I early voted. It was so easy. Travis County is on the verge of breaking a record. What do you have to say to voters who haven't voted yet and are maybe waiting until Nov. 3?

Adler: Don't wait. Don't wait. Keep the momentum going. You know, Nov. 3 is the last possible day to vote. There's a better way to think about it than Election Day. It's the last possible day. But you can vote all this week, Monday through Friday, 7 a.m. to 7 p.m. It's really safe. It's got to be the best way to avoid the lines that we anticipate seeing on Election Day. Much better to go this week. You can go online and actually see where there aren't any lines so that you can get in and out. But our numbers are incredible, I mean, not only did we have 97% of the people in our county register which made national news, but at this point, based on how people are voting and assuming that 75%, 80% of people will actually vote of registered voters, which would be an incredible number in and of itself, probably over 60% of the people that are going to vote have already voted. And that's an incredible number. I urge everybody, keep the momentum going. This is an election that it's real important that everybody vote, make a plan. And if you can vote this week, if not, vote on Election Day, but make sure that your vote.