After local leaders responded to the messaging seen over the weekend, another was spotted on MoPac on Tuesday. 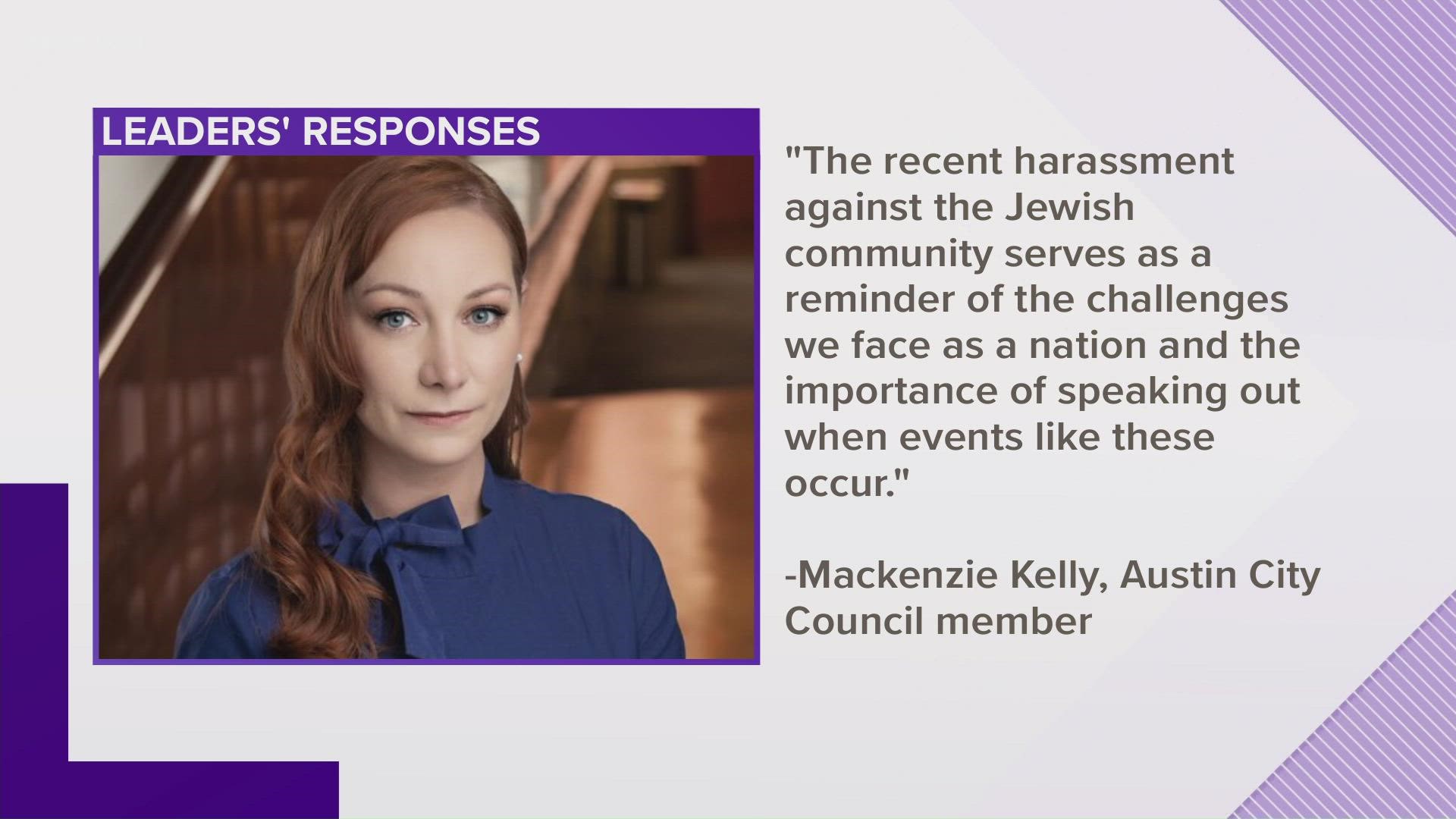 AUSTIN, Texas — City leaders are speaking out, condemning incidents of anti-Semitic, racist, homophobic messaging seen around Austin since Friday and over the past few days.

Reports came in about a banner displayed over TX-Loop 1, or MoPac Expressway, over the weekend. Police did not say what the comments or language on the banner said, but Austin Police Chief Joseph Chacon addressed the banner on Sunday, saying the messages have no place in the capital city.

Here is Chacon's full statement about the banner:

"Let’s be clear. Hate and bigotry have absolutely no place in our community and certainly are not welcome in our police department. Views shared by demonstrators during a protest action over the weekend were abhorrent and do not reflect our values. A screen grab from the more than two-hour incident does not tell the whole story. I ask that our community not buy into the hate and images that have been taken out of context on social media. After enduring a barrage of hate speech and personal insults being hurled at them, officers who responded to the scene calmly and professionally carried out their duty to keep drivers on MoPac, bystanders and protesters safe while ensuring that the incident did not escalate and no laws were being broken. A supervisor responded to the scene and got a protester to comply with his requests to ensure the scene remained safe. At the conclusion of the conversation, the responding supervisor declined a request for a handshake and instead opted for a fist-bump citing COVID-19 safety protocols. APD remains vigilant in its priority in keeping the Austin community safe and holding those who commit crimes accountable."

Please see my statement below regarding the banner that was displayed over MoPac. https://t.co/tOcnPPqmSB pic.twitter.com/tWv0eyJbb1

Shalom Austin, an organization that strives to enhance the quality of Jewish life in the greater Austin area, called the MoPac banner "extremely upsetting and unsettling."

Here is the full statement released by Shalom Austin:

"We are writing to let you know of an antisemitic incident that took place earlier this afternoon on the Far West overpass of Mopac. A small group of individuals hung an antisemitic banner over Mopac. They have since left that area. At this time, this incident does not appear to be related to the appalling vandalism that occurred at Anderson High School this week.

"We understand this is extremely upsetting and unsettling. We are always vigilant in monitoring antisemitic groups and work closely with law enforcement to share information about their activities. This group’s goal is to attract attention by being as offensive as possible. The Austin Police Department is aware, has been incredibly supportive, and has been carefully monitoring and observing the situation. We spoke tonight with Chief Joseph Chacon and he reaffirmed his support for our community. We understand they may have plans to conduct additional activities in Austin and elsewhere in Texas over the coming days. Given their recent activities, we expect this would involve demonstrating in a public space where they can get attention. If you see them, interacting with them is not advised.

"We wanted to let you know that we continue to monitor the situation and work with our local law enforcement to keep our community safe. We are also staying in close contact and coordinating with all local congregations and Jewish organizations to fight hate and antisemitism.

"We are grateful that our allies and colleagues have been reaching out with support."

As alluded to in the Shalom Austin statement, this comes after offensive, racist words and symbols were painted across several student parking spots at Anderson High School on Friday.

A banner and a group of around a dozen people were spotted again on Tuesday at the overpass at Far West Boulevard and MoPac.

Shalom Austin said it spoke with Chief Chacon who said appropriate action will be taken.

Austin should be a safe place for all residents. We will not accept hateful and threatening behavior in our community. #NoPlaceforHateTX pic.twitter.com/884OQi4SJf

Mayor Steve Adler responded to the reports of the hate speech on Saturday, tweeting "I am heartbroken to see anti-Semitic hatred in Austin, a welcoming and respectful place. Hatred of any kind has no place in our city. If you see or hear it, you should report it to @ADL."

I am heartbroken to see antisemitic hatred in Austin, a welcoming and respectful place. Hatred of any kind has no place in our city. If you see or hear it, you should report it to @ADL at https://t.co/baFmvEIpjD

"Yesterday students at Anderson High School encountered anti-semitic, homophobic, and racist graffiti when arriving at school. This hate is unacceptable in our community. We must all speak out against it. [I am not posting a photo because I don't want to circulate hate.] #NoHate," Alter tweeted.

On Monday Alter put out a statement, saying:

"This past weekend multiple anti-Semitic, racist and homophobic incidents took place in District 10. These incidents have shaken me and many Austinites, especially those of us of Jewish faith. These acts of hate do not represent our community values. No one should experience hate as they arrive at school, drive on our highway, or play in our parks.

"I would like to thank the Austinites who quickly reported these incidents to 311 and 911, and the officers for their rapid response. Quick response to hate crimes allows us to deprive the perpetrators of the attention they seek.

"If you experience or witness an incident of antisemitism, extremism, bias, bigotry or hate, please report it to the Anti-Defamation League (adl.org/reportincident) and call 311 or 911 as appropriate.

"I have been in contact with Shalom Austin, ADL, and the school district to offer assistance and support. I am reviewing all available video footage from Saturday’s incident at Far West and Mopac and have begun conversations with City leadership about how to continuously improve the City’s response to hate moving forward."

"Thank you @ALTERforATX for calling out this antisemitism, homophobia, and racism," Casar added.

"The antisemitic, racist, and homophobic graffiti at Anderson High School is more than just vandalism. It was a reminder that the work of making Austin ISD a safe, inclusive place is never completed, and the community’s response is proof that the ugly graffiti does not represent who we are. There is no place for hate at Anderson High School or any other school in the Austin Independent School District, and the graffiti is an insult to the great work our teachers, administrators, and staff do every day to make sure every student feels safe at school.

If your student has been disturbed by these events please have them reach out to their campus counselor. We’re here to support our students who may have felt targeted or unsafe by these hateful images. And if you have any questions or concerns, please do not hesitate to contact us via Let’s Talk."

Councilmember Mackenzie Kelly released the following statement after the second incident on Tuesday:

"Antisemitism, bigotry and harassment violate our city's core principles and impact all of us. The recent harassment against the Jewish community serves as a reminder of the challenges we face as a nation and the importance of speaking out when events like this occur. I stand with the Jewish community at this time and look forward to a peaceful resolution."

Councilwoman Kelly’s statement related to the incidents on Far West at Mopac: pic.twitter.com/kZNYxEJ68u

Adler said on Tuesday: "Acts of antisemitism, bigotry, and racism are not welcome in our city. Every person in our community deserves to feel like they belong. If you see or hear bigotry of any kind, report it to https://www.adl.org/reportincident."

Acts of antisemitism, bigotry, and racism are not welcome in our city. Every person in our community deserves to feel like they belong. If you see or hear bigotry of any kind, report it to https://t.co/eAtnFQK4ui

Meanwhile, Councilmember Alter tweeted on Tuesday saying, "We are so much better than the small group of haters who are trying to provoke us as we drive home to our families."

We are so much better than the small group of haters who are trying to provoke us as we drive home to our families. #NoPlaceforHateTX

Police confirmed that the scene was clear Tuesday by the time officers arrived.

The anti-Semitic hate group we wrote you about Saturday evening continues to maintain their presence in Central Texas and conducted protests today in San Antonio and Austin. This afternoon in Austin, the group rehung their original banner and added a second anti-Semitic one on the Far West Blvd. overpass over Mopac.

We were immediately in touch with APD, including Chief Chacon, to ensure the department was aware of this activity, and had conversations with Mayor Adler and Council Member Alter. The protesters concluded their activities as a contingent of Austin Police officers arrived on scene. The goal of this group is to cause trouble, be as confrontational as possible, and attract attention.

There remains a chance the group will continue to hold anti-Semitic protests in our area over the next few days. Chief Chacon has advised us that appropriate enforcement action will be taken to ensure that the activity ceases. We advise that you do not attempt to engage this group.

Here is more information on the group if you are interested.