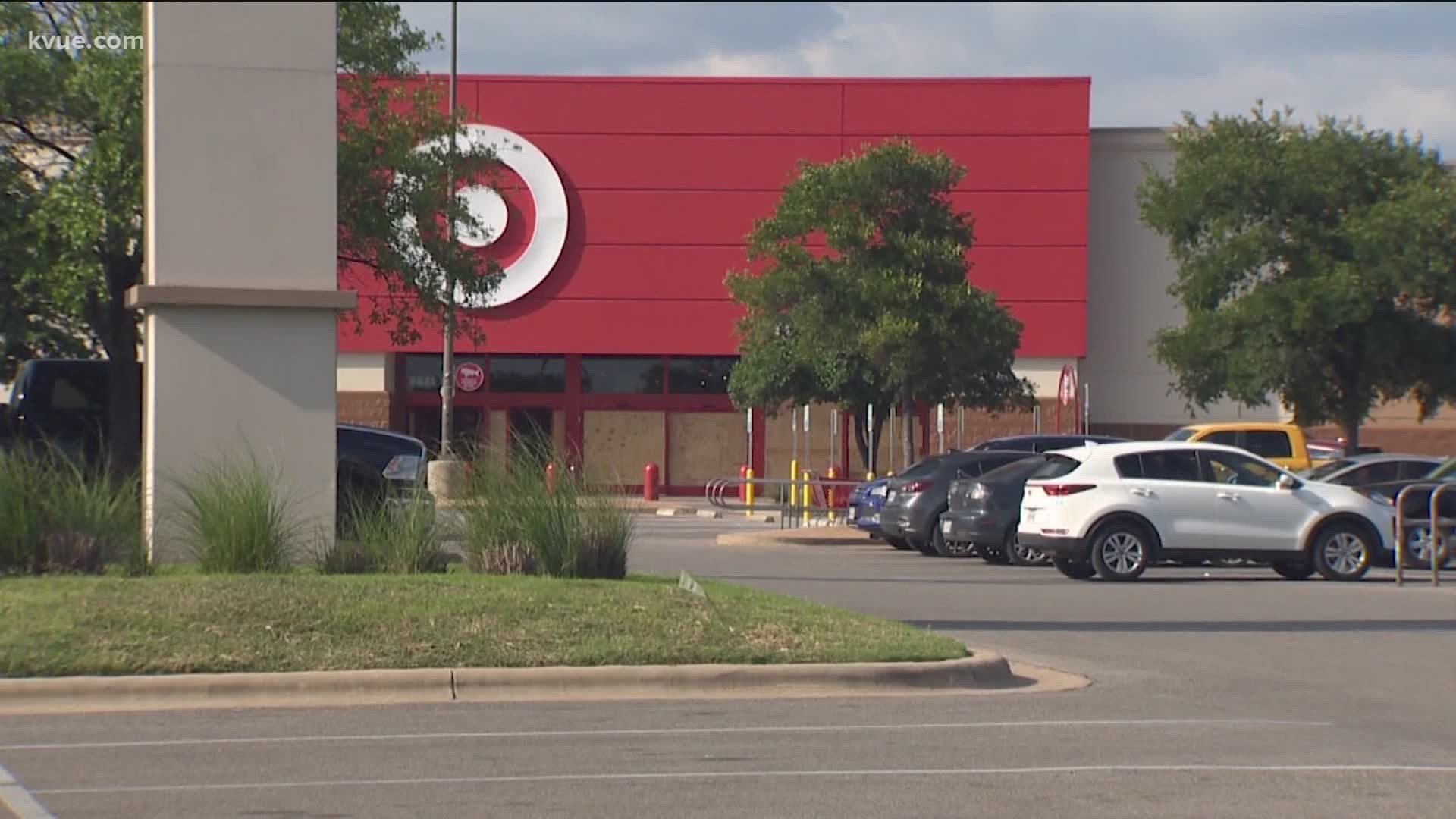 AUSTIN, Texas — Three people have been arrested in connection with looting, burglary and property damage at a Target store in Austin on May 31, the Travis County District Attorney’s Office said on Saturday.

The incident happened at the retail store located at 5621 N. I-35 in Capital Plaza.

The district attorney’s office said the three people arrested are “known members” of a local self-identified "Antifa" group. It said the damage and merchandise stolen is valued at over $20,000. An affidavit obtained by KVUE stated that among a group of 20 to 30 people massing at the front doors to Target, Austin police "knew several of the group members belonged to the former Austin Red Guards, which is a self-identified communist/socialist Antifa group."

The arrest affidavit stated that Lisa Hogan, 27, of Austin, was streaming a Facebook Live video on the Mike Ramos Brigade Facebook page "urging people to come down to the Target and 'join us, even if you do not want to loot.'" Austin police said it monitored the Facebook Live from a different location and matched the event with what was being observed in person, according to the arrest affidavit.

APD said that within minutes of the Facebook feed being started, numerous vehicles pulled into the parking lot and the occupants of those vehicles walked towards the front of the Target store. APD said officers observed a man, identified as Samuel Miller, 21, of Austin, begin to smash and rip security cameras from the building. Several others began to rip plywood from the doors of the Target store, according to the affidavit.

The affidavit stated that when members of the Austin Police Department Special Response Team showed up, Hogan and four other members of the protest rapidly walked from the front of the store through the strip center parking lot. APD said officers saw four of the five members get into a black sedan, which was driven by a man identified by police as Skye Elder, 23, of Austin.

Miller was arrested and charged with criminal mischief and burglary of a building, both state jail felonies. He is accused of ripping out and destroying surveillance cameras outside the store. His bonds are set at $25,000 each.

Edler was charged with burglary of a building, a state jail felony. Her bond is set at $25,000.

Hogan is accused of riot and burglary of a building, both state jail felonies. Her bonds are set at $25,000 each.

VERIFY: What do 'antifa' and 'boogaloo' mean?

“While I fully support the rights of freedom of speech and assembly, I cannot tolerate the subversion of peaceful protest by engaging in wanton destruction and theft,” Travis County District Attorney Margaret Moore said on Saturday. “These arrests are important to protecting not only the property owners, but, even more importantly, the peaceful protesters whose message should be heard.”

“The violence, threat to life and destruction of property we have seen in Austin and other parts of the country jeopardizes the rights and safety of all citizens, including peaceful demonstrators,” said Special Agent in Charge Christopher Combs, FBI San Antonio. “We thank members of the public and encourage them to continue sharing information, photographs and videos of individuals engaged in violent and unlawful activities. With the cooperation of our community and partnership with law enforcement, we will hold those pursuing their violent agendas accountable.”

Austin Police Chief Brian Manley said, “These acts of vandalism and looting will not be tolerated. We appreciate the partnership with our local and federal partners in apprehending these suspects and bringing them to justice.”