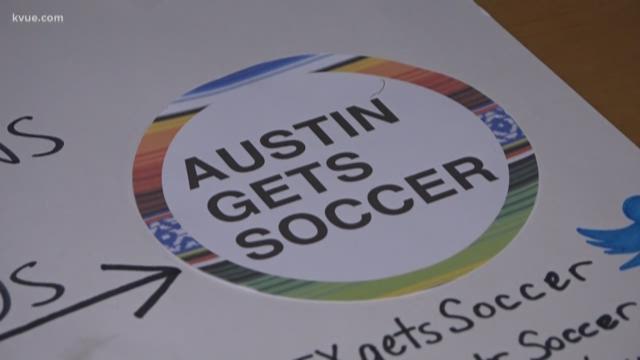 AUSTIN -- Austin's city manager has a big task on his hands: finding out whether McKalla Place is a good fit for a Major League Soccer stadium.

The stadium would serve as the home of Ohio's Columbus Crew Soccer Club, but it wouldn't be Austin's only professional soccer team.

Last summer, United Soccer League, along with USL Austin ownership, announced it would again bring a team to Austin. But when Precourt Sports Ventures announced in October it wanted to bring its MLS team to town, USL put things on hold.

At last check, though, things are moving forward, and soccer fans want to help as much as they can to make both teams a reality.

As list of potential sites for MLS stadium narrows, focus turns to McKalla Place near The Domain

Through the power of beer at St. Elmo's Brewing Company in South Austin, the people behind Austin Gets Soccer got feedback from fellow fans Saturday afternoon.

They covered walls with sticky notes, asking questions like how the team or teams should give back and what they should be called.

Despite the different opinions, these soccer fans said the time for a team in Austin is now.

"Even though Austin has not supported soccer -- the teams have left or folded -- there's an opportunity here in the next year to support soccer, and we're really excited about it," Austin Gets Soccer event coordinator Dan Wiersema said.

The USL team is expected to begin playing in 2019 at a new stadium at the Circuit of the Americas.

Meanwhile, Austin's city manager has until July 1 to come back to city council with his findings about McKalla Place as a stadium site for the MLS team from Ohio.