At least two Austin restaurants are adding a surcharge to bills. At Foreign & Domestic it's optional, at Hoover's Cooking it's not.

AUSTIN, Texas — Inside Foreign & Domestic off 53rd Street in North Austin, there was a lot of prepping for Tuesday's dinner service.

Co-owners Nathan Lemley and Sarah Heard were onhand hours early preparing and cooking. There was plenty of egg cracking, pouring and whipping.

Heard was making the restaurant's signature popovers. And while the rolls are a mainstay on the menu, there's a relatively new item.

"We also started applying a three-percent surcharge on customer bills. If they would like, we can remove it," said Lemley.

That three-percent surcharge is clearly seen on the receipt and on the menu.

Lemley made that move because he started giving his full-time employees health coverage.

"It's amazing because I don't have the money in savings if anything were to happen to me right now. Knock on wood, hopefully nothing happens," said Pottorf.

In East Austin, Hoover's Cooking also added a surcharge on customer bills. It's $1. And the owner, Hoover Alexander, said it's taking care of paid sick leave.

He emailed KVUE'S Jenni Lee the restaurant's Community Value Contribution, which all customers get with their menus. 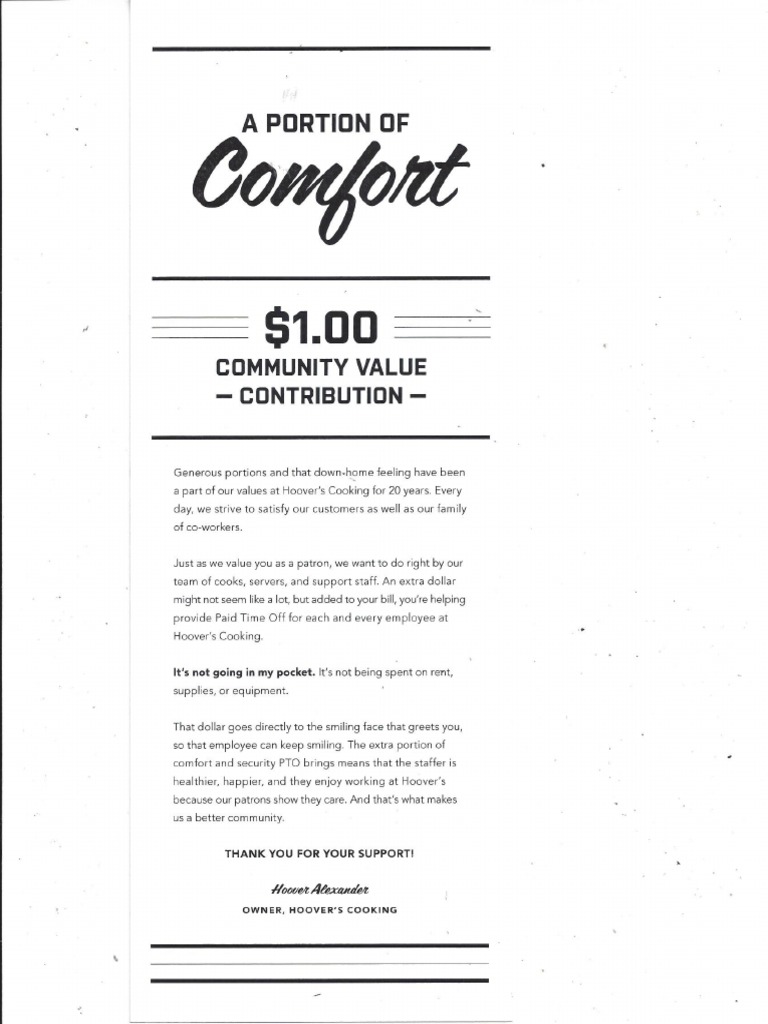 Community Value Contribution
A PORTION OF Confort | 100 COMMUNITY VALUE - CONTRIBUTION - Generous portions and that down-home feeling have been "2 part of aur values at Hoever's Cooking for 20 years, Every day, we strive to satisfy our customers as well as our family of conworkers Just ae we valua you a8 a patron, we want to de right by our team of cooks, sorvers, and support staff.

It reads that the $1 helps pay for "Paid Time Off for each and every employee." The $1 is not an option.

Back at Foreign & Domestic, Lemley explained why he opted to do a percentage of the bill and not just raise the food price.

"If we were to raise prices on our food, we would have to raise a dollar per item. Basically, this would be the least amount we could raise and that would actually cost the guest more," he said.

Running a small business in a growing city is always a challenge, but Lemley said there was no question of what to do when it came to providing health insurance.