'They listened to our cries' | Protesters and police discuss peaceful protests

After a weekend that had some violence, police joined protesters during a march on Monday night. After, police and protesters talked with each other. 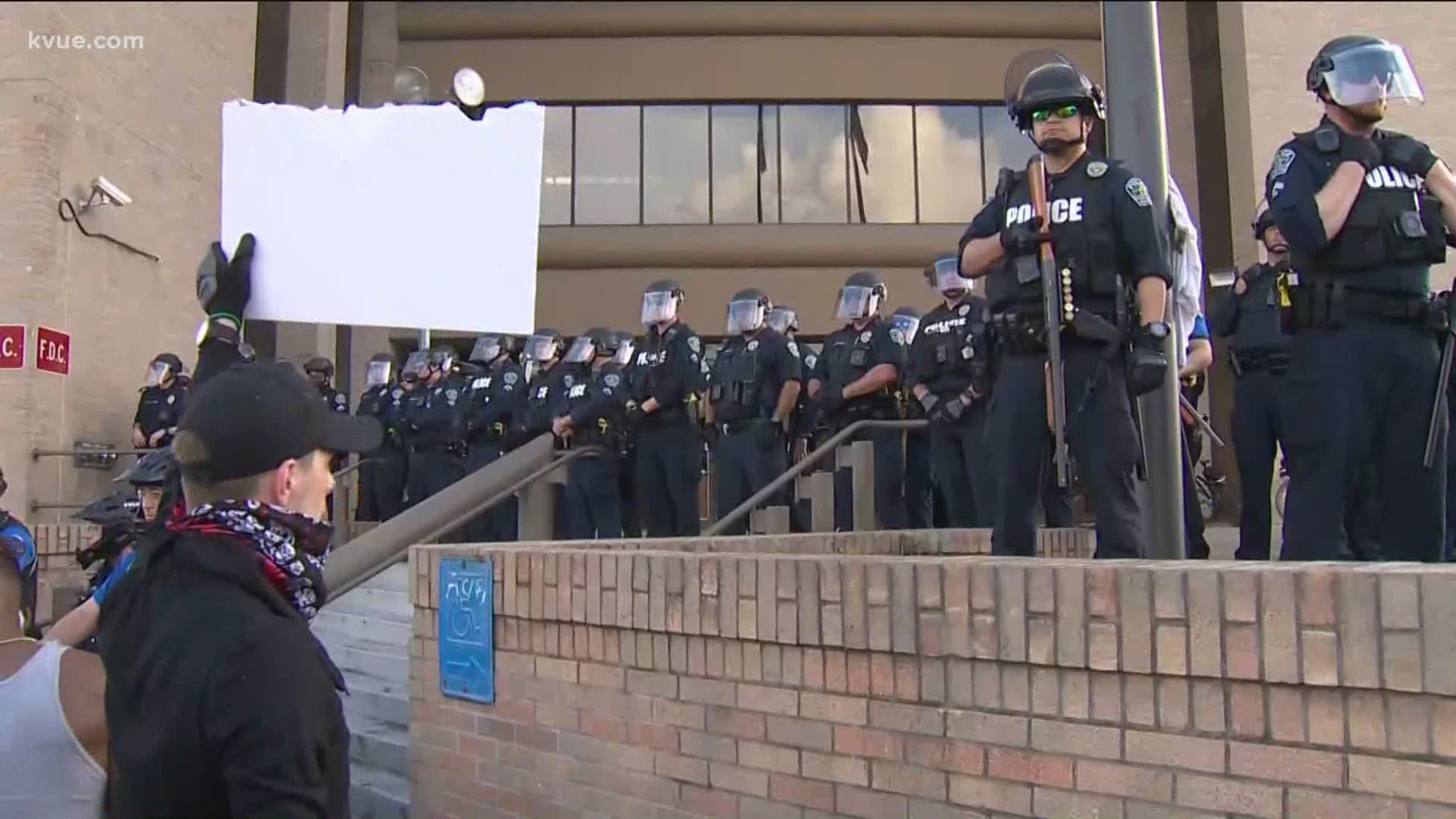 Protesters asked police to join in their march, and police did, along with sticking around to shake hands, hug and talk with protesters.

It hasn't all been positive, at least three people were hospitalized over the weekend, after being police shot them with less-lethal bean bag rounds. One of those people was critically hurt.

And as of Tuesday evening, the Office of Police Oversight sent 82 complaints related to how police have handled the protests to APD Internal Affairs. The complaints will be made public online sometime in the future. There is no date set but "hopefully soon."

After a weekend of protests that also included looting, tagging buildings, sidewalks, and streets, and fires, some protesters on Monday seemed determined to keep things peaceful.

"So we reached out to the officers, we asked them to come down, show us that they were human, ask them what they felt about the situation with George Floyd and if they thought it was wrong or not," said DaShawn Barr, one of the protesters.

Austin Police Lieutenant Chris Leleux recalled the moments that happened. He said he watched as his commander stepped down to talk to protesters and then took their requests back to the assistant chiefs.

"And Commander Eveleth said, do you want to join the march? And I said, absolutely," said Leleux.

"They put down their shotguns, their batons, their bikes, brought out the assistant chief, and even shook hands with us," said Barr. "And it was so great. And they said, 'We will walk with you and show you that we are a part of being with this group. We are not against this group.' And that's all we've wanted."

Leleux said he had been hoping to have a chance to speak with protesters.

"Those people that extended that offer to our command staff and I'm so grateful that they took them up on," Leleux said, pausing as he began to get choked up. "So [Monday] night, there were conversations that I've been wanting to have this whole weekend."

After marching with the protesters toward Austin police headquarters, Leleux stuck around on the street to have conversations with people.

Leleux stayed with protesters to talk with them before they marched to the Capitol on Monday night. When they returned, Leleux was back on the street, talking with people.

"I honestly believe that officers care very deeply for our community. Otherwise, we wouldn't have chosen this profession," Leleux said, holding back tears. "So when we see what happened to George Floyd and we see that grief, we're grieving with them."

Barr said the protests taught him lessons, as well.

"And I realized that these people are human too," said Barr. "That a lot of them have mixed lives, mixed families, and things like that and we come out here and we get so angry that they're just here to live."

"Just to come out here and show some type of solidarity," said Green. "Because we've been out here crying for the entire weekend, just for their silence to be awakened, and they listened to our cries."

Barr said the feel of the Monday's protest shifted from those over the weekend.

"From night one to this night right here, it has been such an amazing transformation. It's actually such a blessing," said Barr. "It went from fires and everybody screaming profanities at the police, and even me. I had to check my own heart."

Michael Burnett was one of the protesters leading the march on Monday. He also marched alongside police and embraced one of them afterward.

"When we have police officers coming from behind their own line to kneel with us, to give us hugs, to shake our hands, to hug us and tell us they understand our pain — powerful," said Burnett.

KVUE's Molly Oak spoke with both Burnett and Barr on Monday night at the Capitol. She asked if either of them, after participating in protests all weekend, thought they would be hugging a police officer come Monday.

"Definitely not hugging a police officer or anything of that sort," said Barr. "Not to be mean or anything like that, but just the long-tenured history of things between officers and citizens or things like that. Kind of misconstrues your judgment and you kind of don't understand everything that's going on."

Leleux said he gained more understanding after talking with protesters.

"I learned a lot of things that really concern me and make me feel like we're we're failing in some of what we do," said Leleux.

Leleux said it was heartbreaking to learn that people are still afraid to call him for help.

The lieutenant that has 19 years with APD is not the only one who learned something on Monday night.

"When you get out here and you talk with these officers, and you kind of put yourself in their shoes, you realize how hard it is for some of these guys, especially some of the ones that look just like me," said Barr.

Both Barr and Burnett said they hope things continue to remain peaceful. They also encouraged people to go vote.

'His name is Justin Howell. And he is my little brother.' | 20-year-old struck by less lethal round in critical condition