A week's worth of protests against police brutality in Downtown Austin

Here are the latest Austin protest updates for Thursday, June 4. 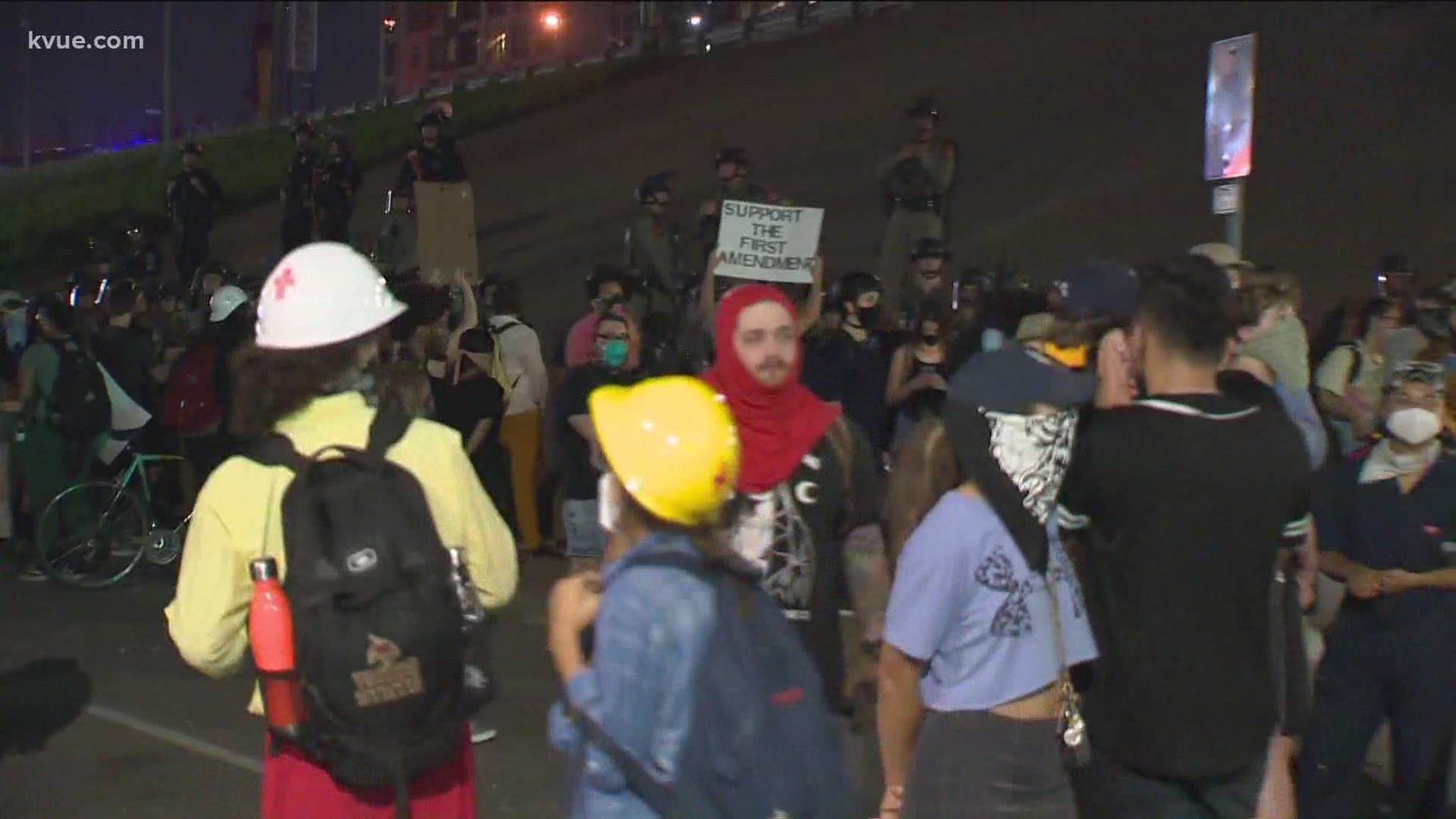 Thursday, June 4, marks a week's worth of protests against police brutality in Downtown Austin. The protests have been the public's response to the deaths of George Floyd in Minneapolis and Michael Ramos in Austin.

Floyd died in police custody last week, and Ramos died after an Austin police officer fired his rifle at him in late April.

During a special session meeting Thursday, the Austin Justice Coalition called on the Austin City Council to defund the Austin Police Department and invest that money into resources for black and brown communities. Many protesters also talked about Austin police during the meeting.

Here are the latest protest updates for Thursday.

12:10 a.m. – KVUE's Bryce Newberry spoke with a protester who was hit by a less-lethal round from police over the weekend. He explained what changes he'd like to see.

11 p.m. – KVUE's Luis de Leon spoke live with two protesters, who told him what brought them out this week and what they'd like to see change.

Another look at the protests outside of APD headquarters. Molly Oak is live—she’s been out all day and will run down what we’ve seen.

10 p.m. – Protesters marched on Sixth Street and then headed down Red River Street before turning on Seventh Street toward Interstate Highway 35.

One group of protesters are marching. Molly Oak is live. WARNING: LANGUAGE

9:25 p.m. – A group of protesters has arrived on the Congress Avenue bridge.

8:40 p.m. – Protesters knocked down two barricades outside APD headquarters as they chanted, "March with us."

APD Officers are out in front talking to protesters.

8:10 p.m. – Some Austin police officers kneeled in front of protesters at the Austin Police Department headquarters.

7:55 p.m. – Protesters are attempting to get onto Interstate 35 through Downtown Austin. DPS troopers are lining the ramp while an APD chopper hovers overhead. KVUE's Bryce Newberry was live on the scene.

Protesters are attempting to get back on I-35 through downtown Austin. Bryce Newberry has a live look.

7:35 p.m. – Protesters from the Capitol building are on the move, heading to the APD headquarters. KVUE's Luis de Leon is live.

The crowd at the capitol is now moving to APD HQ. Luis de Leon is here with a live look.

PHOTOS: Protesters march through Downtown Austin for seventh night in a row

1 / 16
John Gusky/KVUE
For the sixth night in a row, protesters marched through the streets of Downtown Austin, from the Austin Police Department headquarters to the Texas State Capitol, to protest police brutality.

7:20 p.m. – Protesters outside APD headquarters are chanting "defund APD" and "quit your job" as the Austin City Council continues to discuss issues with the department and hear from community members throughout the night.

7:10 p.m. – Protesters observe a moment of silence outside the Capitol. The crowd is continuing to advocate for peaceful protests.

7 p.m. – Compared to previous nights this week, KVUE's Bryce Newberry said the crowd and police presence on Thursday night are much larger.

6:35 p.m. – KVUE's Luis de Leon is live with a crowd gathered outside the Capitol as protests continue on Thursday evening.

Luis de Leon is live with a look at the crowd outside of the Texas State Capitol.

6:20 p.m. – The crowd has arrived at the Capitol building from APD headquarters.

5:30 p.m. – The Texas football team has reached the Texas State Capitol and is taking a nine-minute knee to remember George Floyd.

5:25 p.m. – A crowd has gathered outside the Texas State Capitol again on Thursday night.

5:10 p.m. – KVUE's Jake Garcia is live with the UT football team as they march through Downtown Austin.

4:40 p.m. – Texas football is participating in a team march through Austin to show support for the Black Lives Matter movement.