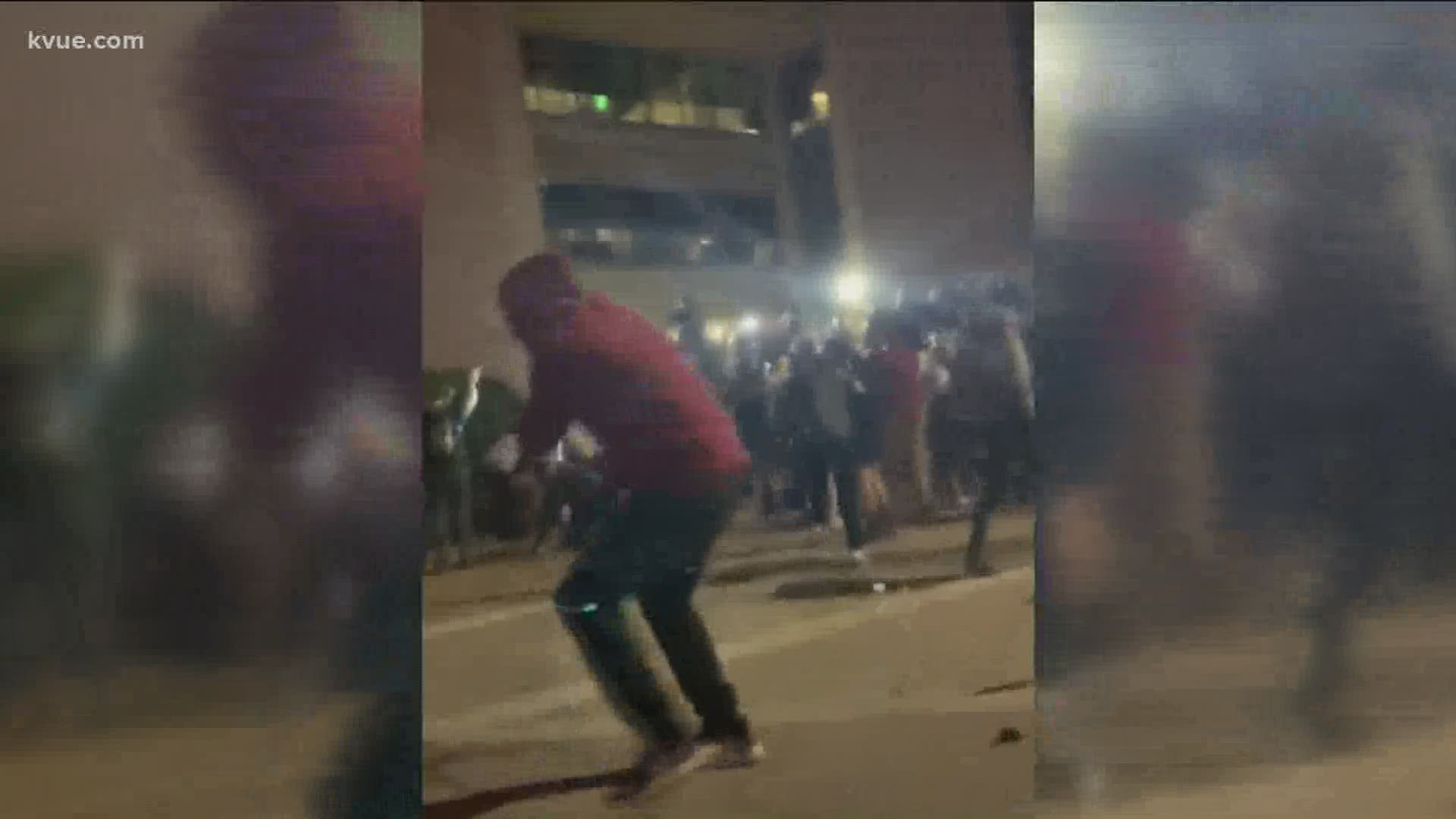 AUSTIN, Texas — A 20-year-old man was in a hospital in critical condition Monday afternoon after an Austin police officer fired a less-lethal round that was intended for somebody else, according to police.

The incident happened after 11 p.m. Sunday, May 31, in front of the Austin Police Department's headquarters, located near East Eighth Street and Interstate Highway 35.

Chief Brian Manley said protesters were gathered outside of the headquarters for the third night in a row when someone in the crowd threw a bottle at officers protecting the building. A witness, David Frost, told KVUE someone threw the bottle at the officers stationed on the I-35 bridge, however.

Chief Manley said the 20-year-old black man, who was recording video on his phone at the time, was standing next to the person who had thrown the bottle. Shortly after, the police department's HALO cameras showed that person throw a backpack at the officers.

"Within a moment's notice, after that, one of the officers fired their less-lethal munition at that individual, apparently, but it struck this [20-year-old] victim instead. This victim then fell to the ground, and it appears as though he hit his head when he fell to the ground as well," Chief Manley said.

Frost saw what happened next.

"When I saw him, he immediately dropped to the ground. He was seizing. There was blood all over the ground," he said.

A group took the injured man to an area underneath the I-35 bridge to see whether they could attend to his injuries there.

"We realized that this guy is in serious harm. We couldn't do anything to him underneath the bridge. He needed to get serious medical attention," Frost said.

The group then picked the man up again and began to carry him to the APD officers lined up at the headquarters.

"They were given direction to bring him to the officers. And, as is being widely reported and as is currently under review, it's reported that they were fired upon with less-lethal munitions as they brought this victim towards the officers to get him medical help," Chief Manley said.

Frost captured that moment on his cell phone camera. He said he's still trying to understand why the officers would fire on the group trying to seek help.

"We were all, you know, just as scared as everybody else there. And for them to take that type of drastic action at us, and we didn't even have any type of weapon to protect ourselves, that is complete injustice," he said.

Eventually, Austin police officers helped bring the man inside APD headquarters. Medics took him to the hospital in critical condition.

A volunteer medic was also injured in the chaos, but she is OK.

While holding back tears Monday, Chief Manley addressed the victim and his family during a press conference.

"My heart is with you. I am praying for you. I'm praying for your child, and I hope that they have a complete and quick recovery. And I will make myself open to speak with you and answer questions," he said.

WATCH: Chief Manley addresses media after a weekend of protests

He also shared that he met with his executive team Monday morning to discuss the tactics used during the weekend protests and whether to make any changes.

"I've also reached out to other police chiefs, few around the state, to talk to them about the tactics that they're using and what they're seeing as successful," Chief Manley said. "We are thoroughly evaluating the tactics that we use this weekend to ensure that our current policies, training and tactics are appropriate in this area."

Frost, however, wants APD to change its tactics now.

"They saw the person, they aimed at him and they hit the wrong person. If you see the person that is causing the mischief, go get them," he said. "There's no need for other people, for innocent bystanders to be getting hurt."

Chief Manley said the case remains under investigation, and the officer who fired the bean bag round had not yet been identified.