The proposition would force the City of Austin to divert millions in funding toward the Austin Police Department, including a large boost in hiring. 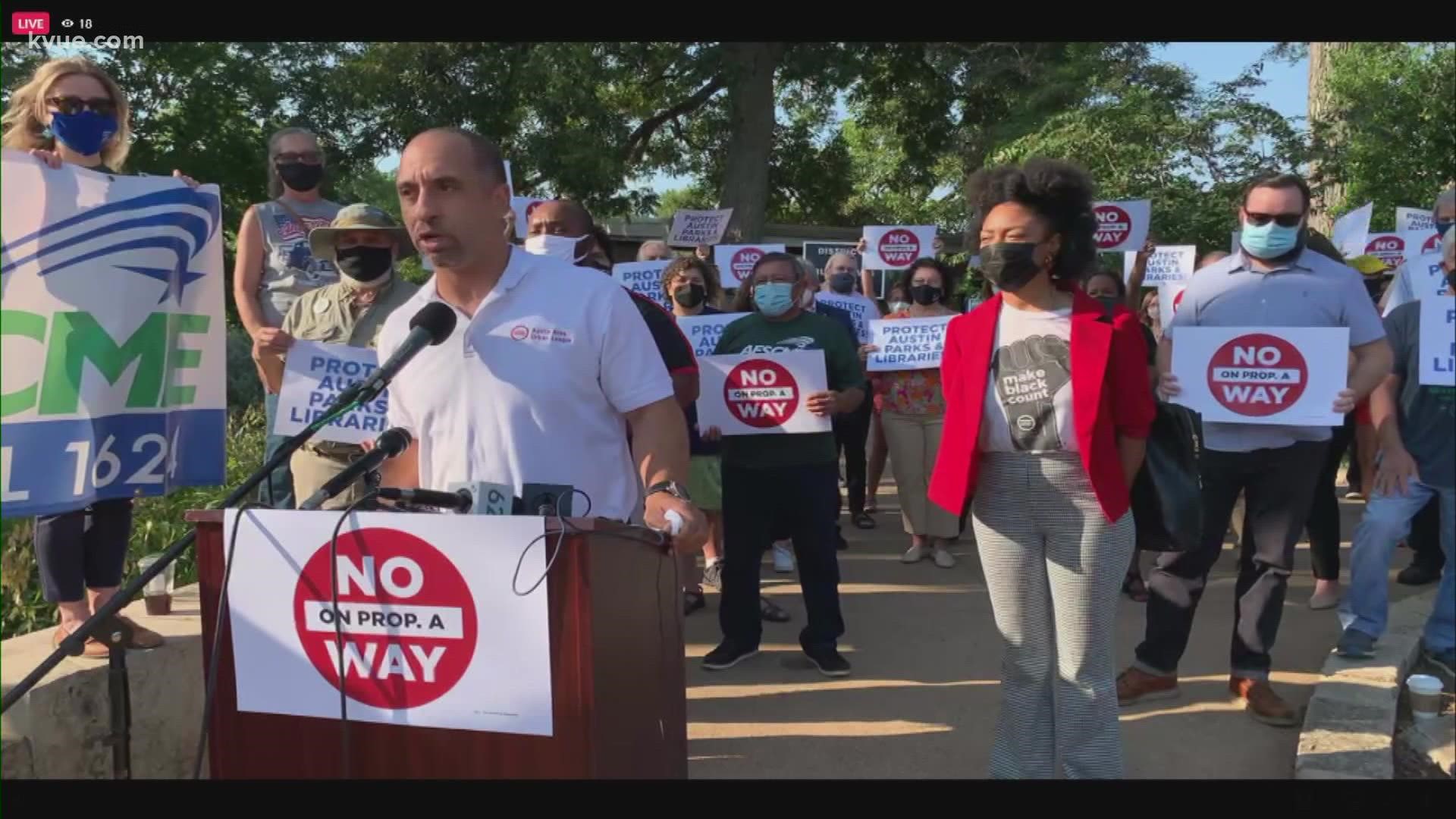 AUSTIN, Texas — On Thursday, city leaders, organizations and activists gathered at Barton Springs to announce the launch of "No Way on Prop A," an opposition campaign they hope will "expose the truth" about the proposition and the "extreme harm" it could cause to Austin if it is passed.

The proposition, if passed by voters in November, would require a minimum of two police officers per 1,000 population and it would require an additional 40 hours of post-cadet class training hours per year.

Front-line officers would also focus 35% of their time on community engagement.

"Prop A is an unfunded mandate that would force Austin to spend hundreds of millions of dollars more on the police department," the campaign said in a press release. "If it passes, the City will have to cut mental health care and other services, and lay off firefighters, medics and 911 call takers. The measure would devastate city finances and make Austin less safe by lifting up police over other public safety workers. Voters deserve to know the truth."

Local leaders in support of the campaign include:

In a one-on-one interview with KVUE, Guthrie explained to KVUE while she supports more cadet classes, Prop A is financially irresponsible and not feasible.

"Just throwing 500 officers there does not make anyone safe. We have to look at the big picture," Guthrie said.

The Save Austin Now PAC, which launched the effort to get the item on the ballot, was quick to respond Thursday after the campaign was launched.

Co-founder Cleo Petricek explained that the officer shortage is putting the community in harm's way, including a rise in homicides and delayed response times. Many years ago, Petricek said she was assaulted in Dallas.

As a former parole officer, she believes in community programs that deter crimes, but also explained that the city can afford Prop A since staffing would reach levels similar to what the 2019 city budget allowed.

Due to a new State law passed in the 2021 State Legislature that penalizes cities for cutting police funding, the City of Austin already had to restore the budget cuts made to APD in 2020.

During Thursday's announcement, Katie Naranjo, chair of the Travis County Democratic Party, stated Proposition A was created by a group associated with members of the "Republican Party."

Petricek explained that is not true, admitting to KVUE she is a Democrat. However, she believes this is a public safety issue where politics do not belong.

“Low-income neighborhoods disproportionately hurt by skyrocketing homicide rates, 911 wait times and other horrific residual effects of the council’s police defunding efforts are going to lead the way voting for Prop A. A police department with better trained, sufficiently staffed, and foreign language proficient officers are issues Austinites agree on. Paid activists on this list like Chincanchan are on the city’s full-time payroll yet are running this campaign. Just like last time, the city is out of touch with the on-the-ground impact their policies are having and are using city resources to fight the majority of voters. Our city can afford the same number of police officers that the city authorized just two years ago. City Hall may not support law enforcement, but city residents do. We will return safety to our city on Nov. 2.”