The APD said it is investigating and urges anyone with more information to come forward. 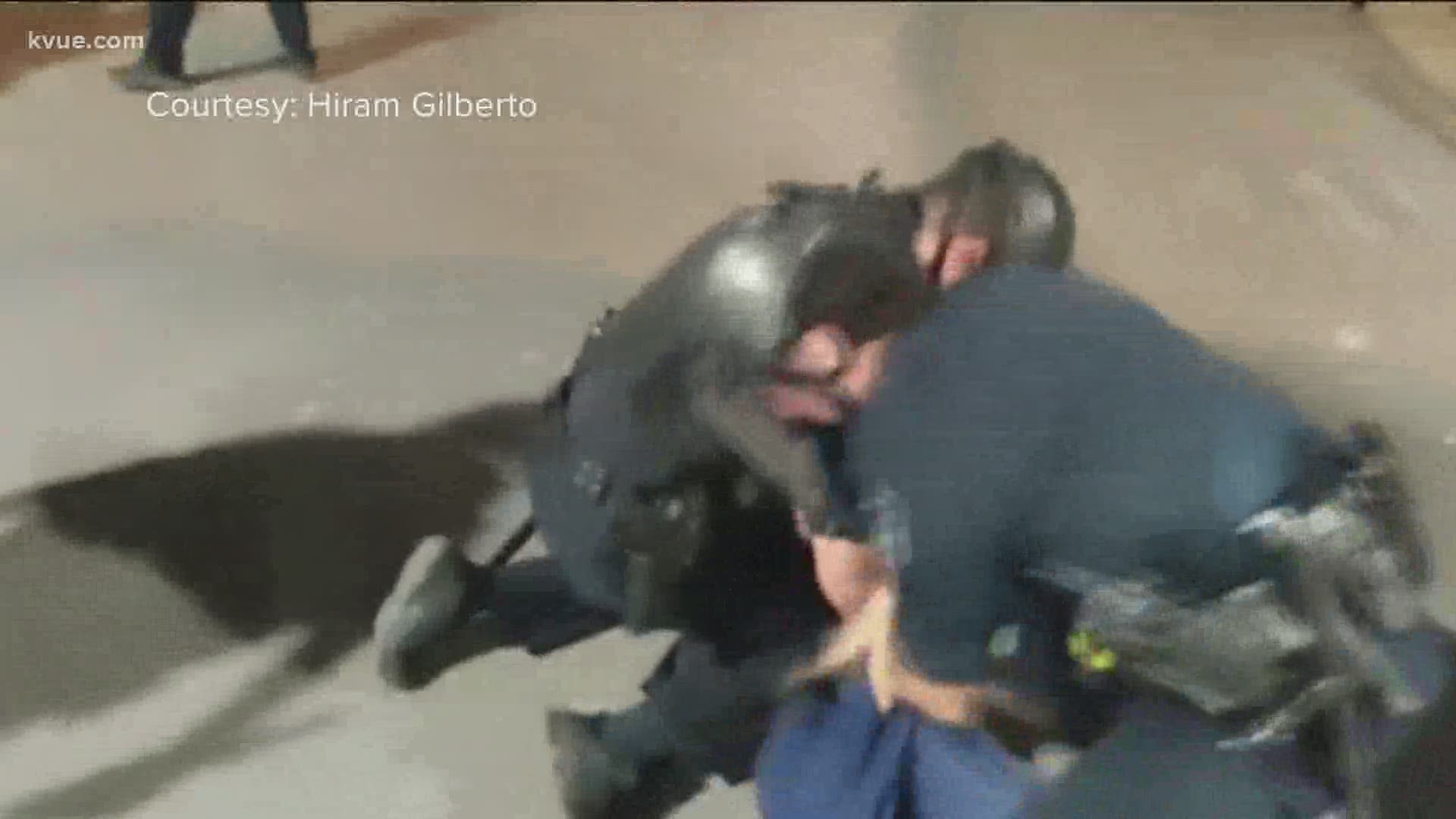 AUSTIN, Texas — The Austin Police Department is investigating after a video surfaced on social media appearing to show an Austin police officer kneeling on top of a teenage protester.

The APD's statement about the incident can be read below:

Any time an officer uses force, it is reviewed by their chain of command to determine whether it was lawful and within policy. The incident is currently undergoing that process.

We encourage anyone with information that could aid in that review to reach out to the City of Austin Office of Police Oversight."

According to our news partners at the Austin American-Statesman, dozens of demonstrators were gathering near APD headquarters Friday night for a candlelight vigil dedicated to people killed across the country by law enforcement. Nationwide, protests were launched after the death of George Floyd, who died after an arrest earlier this year in Minneapolis. Video of the incident showed an officer kneeling on Floyd's neck.

The Statesman reported that a crowd of protesters was blocking an intersection near APD headquarters around 11:30 p.m. Friday when officers gave them a five-minute warning to clear the area. Despite the warning, a handful of protesters remained in the road and officers began to move toward them.

According to Cornell's attorney, Marc Chavez, Cornell was still in the intersection when police told him and others to get out of the road. Video of the incident shows Cornell making lewd gestures towards officers followed by officers chasing him, grabbing his backpack to "conduct a takedown," then arresting him.

Once Cornell was on the ground, “other officers assisted by placing handcuffs on him.” However, Chavez said in Friday's incident the third officer entering the situation to help detain him was excessive and the officer putting his knee on Cornell’s neck was also excessive. This arrest came one day after Austin Police Chief Brian Manley announced a ban on chokeholds and neck restraints within APD.

Video of this incident was obtained and provided by Hiram Gilberto.

Chavez said he wants to see the charge of "obstructing a highway" rejected and not put on Cornell's record in any way.

Two law enforcement analysts weighed in on the use-of-force in this incident.

"The only thing I was concerned about was the third officer coming in and appears to put some kind of pressure with his hand either on the side of the face of the young man or on the neck," Andrew Scott, President of AJS Consulting and an expert witness in cases that involve police actions and tactics, said. "Putting that pressure onto the head or neck area didn't appear to be necessary. What he should've immediately gone to is taking one of the arms that the young man was refusing to put behind his back and move that towards his back while the other officer had his other hand. That would be the only criticism I have if the arrest was legitimate."

Jerry Staton, an expert witness specializing in police procedures and use of force, mostly agreed.

According to Chavez, he has two objectives: make sure Cornell's record stays clear in light of two arrests during protests and a formal acknowledgement from officers involved in Cornell's arrest that they used a neck restraint, violating Manley's orders.

Police released Cornell from custody over the weekend.

Chavez reported that charges from a prior protest arrest involving his client have been rejected by the county. He said Cornell was arrested during the first night of protests for “interference with a police animal” after claims he hit a police horse with a sign.

Cornell's case comes after Austin Police Chief Brian Manley announced last week that the APD would be updating its policy on chokeholds and neck restraints.

On Thursday, the Austin City Council voted on several resolutions that lay the groundwork for sweeping changes at the department: