The Austin City Council passed a plan on Thursday to resume the police academy with a reimagined approach. 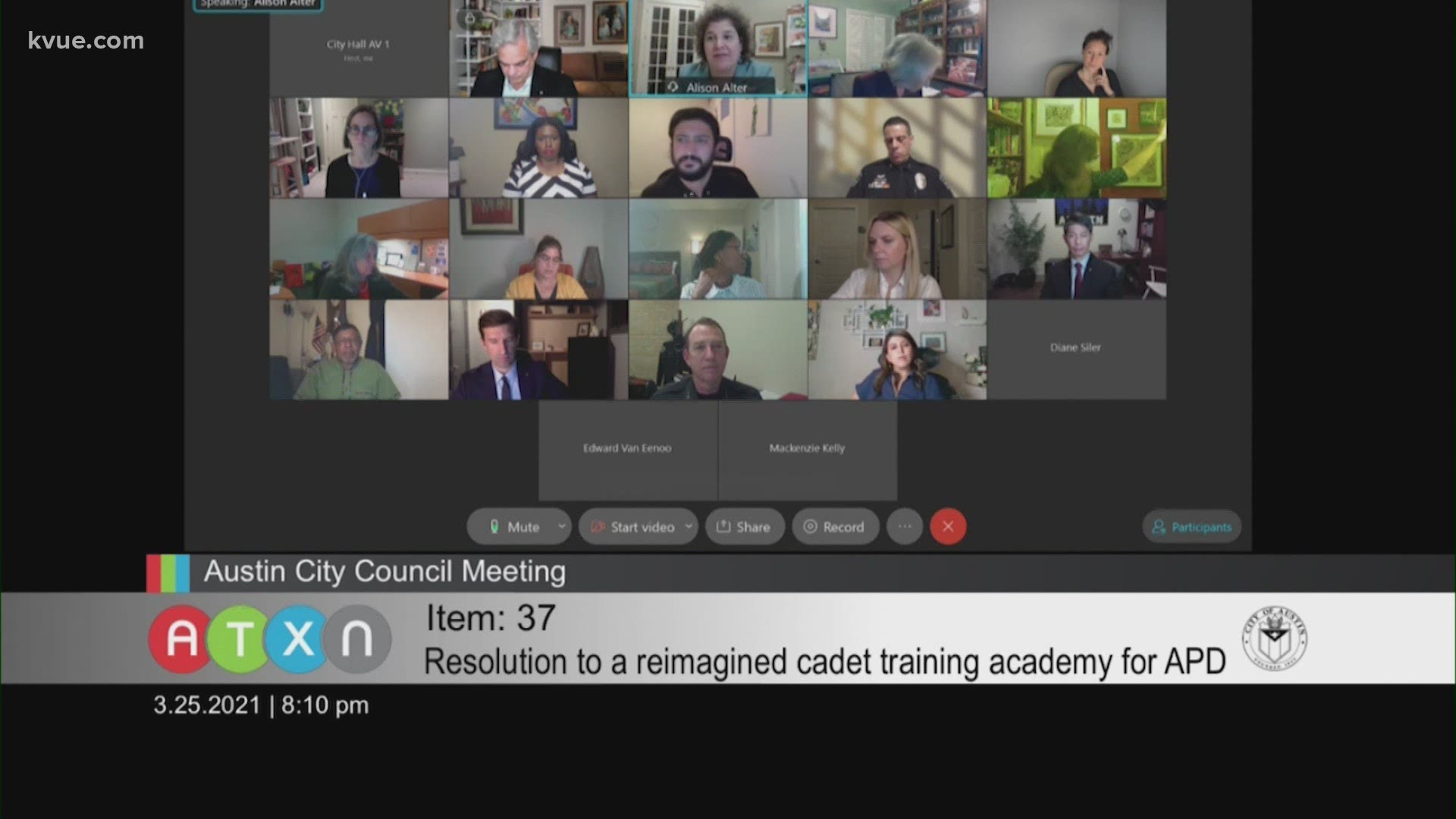 AUSTIN, Texas — The first police academy class in more than one year has been given a path forward to start this summer, after a decision by the Austin City Council.

On Thursday, the council considered “a reimagined cadet training academy for the Austin Police Department” which lays the groundwork for resuming a cadet class by June 7.

The item passed with eight votes, with Councilmember Greg Casar voting against and two abstaining.

In a memo sent to Mayor Steve Adler and councilmembers, City Manager Spencer Cronk said the proposal will “address concerns about academy curriculum, training techniques and overall learning objectives identified by council and the community in the past,” as well as address the “City’s need to maintain adequate staffing within APD.”

Part of the changes call for more community involvement, including the possibility for some training videos to be viewed by community members and experts being involved in teaching some of the courses alongside academy instructors, a spokesperson for the City said.

"We are beginning the process of reimagining public safety and we know that making policy and cultural changes to address the disproportionate impacts of police violence on people of color is of the utmost importance," Cronk said Monday during his announcement outlining the hiring process of a new police chief.

After the vote on Thursday, Adler issued the following statement:

“Austin needs a new cadet class, and we also need that class to accomplish the goals that meet the community’s objectives. I believe we can be at that place for a June 7 cadet class by following the city manager’s blueprint.

“Last summer, Austin City Council made a commitment to the community to conduct an in-depth review of our police academy. The professional and task force review of training materials has validated the need for reform and corrective actions to better prepare cadets for their roles as guardians of public safety for all members of our community. The next step in our review process will be to reform how those materials are taught. The city manager has laid out a timeline that accomplishes this with a June 7 start date.

“I am hoping the upcoming cadet class will be cultural change-makers for our community.”

Chief Brian Manley is retiring at the end of March, and Assistant Chief Joe Chacon will serve as interim chief.

Cronk’s memo said the City has hired Dr. Anne Kringen to be the new training division manager, which is a position that is part of the command staff at APD.

"I’m excited about the opportunity to help Austin Police Department and the City of Austin take the next steps in police cadet training," Dr. Kringen said. "I’ll be working to implement evidence-based practices in training and developing processes to measure training success. I think it’s fundamentally important to involve the community voice into policing in all spheres, including the academy, and I’ll work to foster a culture of inclusivity that reflects the needs of a city as diverse and exciting as Austin."

According to the APD, Dr. Kringen will soon begin focussing on ensuring that all academy curriculum for the 144th cadet class is inclusive and incorporates community perspectives pinpointed through the reimagining public safety process. She will also focus on bringing in adult learning techniques and ensuring that all learning objectives are fully covered and properly evaluated.

Other changes include a more active learning environment for cadets and an increased focus on diversity, equity and inclusion.

The last class of cadets graduated in October 2020 after a 32-week training program.

Some local groups say this process has moved a little bit too quickly, like the Austin Justice Coalition.

In a release on Tuesday, the group's Sukyi McMahon said in part, "To reimagine means to fully rethink, to ensure that the training academy and the officers trained there meet the needs of the community at large, not that they’re a slightly improved version of the current status quo. To say that advocates are skeptical about the short timeline to launching the 144th academy is an understatement."

"I think City Council is trying to appease to both sides of the community," Moore said. "But I really think it slightly contradicts, if not completely, the whole reimagine a narrative that a lot of City Council said they wanted to do last summer. But yet we're moving forward with some very status quo type of agenda."

Moore is also on the City's Reimagining Public Safety Task Force. He added the process to get this plan out for a vote was a bit rushed.

"Ideally the City and the city manager would have waited to see what the task force and what other folks in the community would have wanted before they kind of announced these things," he said.

"Restarting the cadet academy is a no-brainer at this point," Kelly said on Tuesday. "In 2021, we're experiencing staffing levels for the city of Austin Police Department where we were in 2011. We're at least down 250 police officers where we should be. And we need to move forward because of the safety of the people that live in Austin."

She added that she worries if there aren't more officers soon, it could lead to delayed response times.

"As long as reimagining doesn't mean taking funds away from, I'm all about it. There are always going to be better ways that we can do things. And I want to get Austin back to where the Austin Police Department is one of the best departments in the entire country," Kelly said.

Kelly voted for the item on Thursday night.

In May 2020, Cronk postponed the scheduled June 2020 cadet class for an audit of the training materials, which was delayed because of the scope of work and the unanticipated impact of the city-wide response to COVID-19.

Then in August, when the council approved a new budget that moved about $150 million from the police department, that slashed funding for three cadet classes.

With the item's passing on Thursday, the next step is a budget amendment to fund the class, a City spokesperson said. More changes could be adopted after the first class is run using the updated framework.

'What are we going to do?' | Downtown Bertram, businesses devastated by storm damage