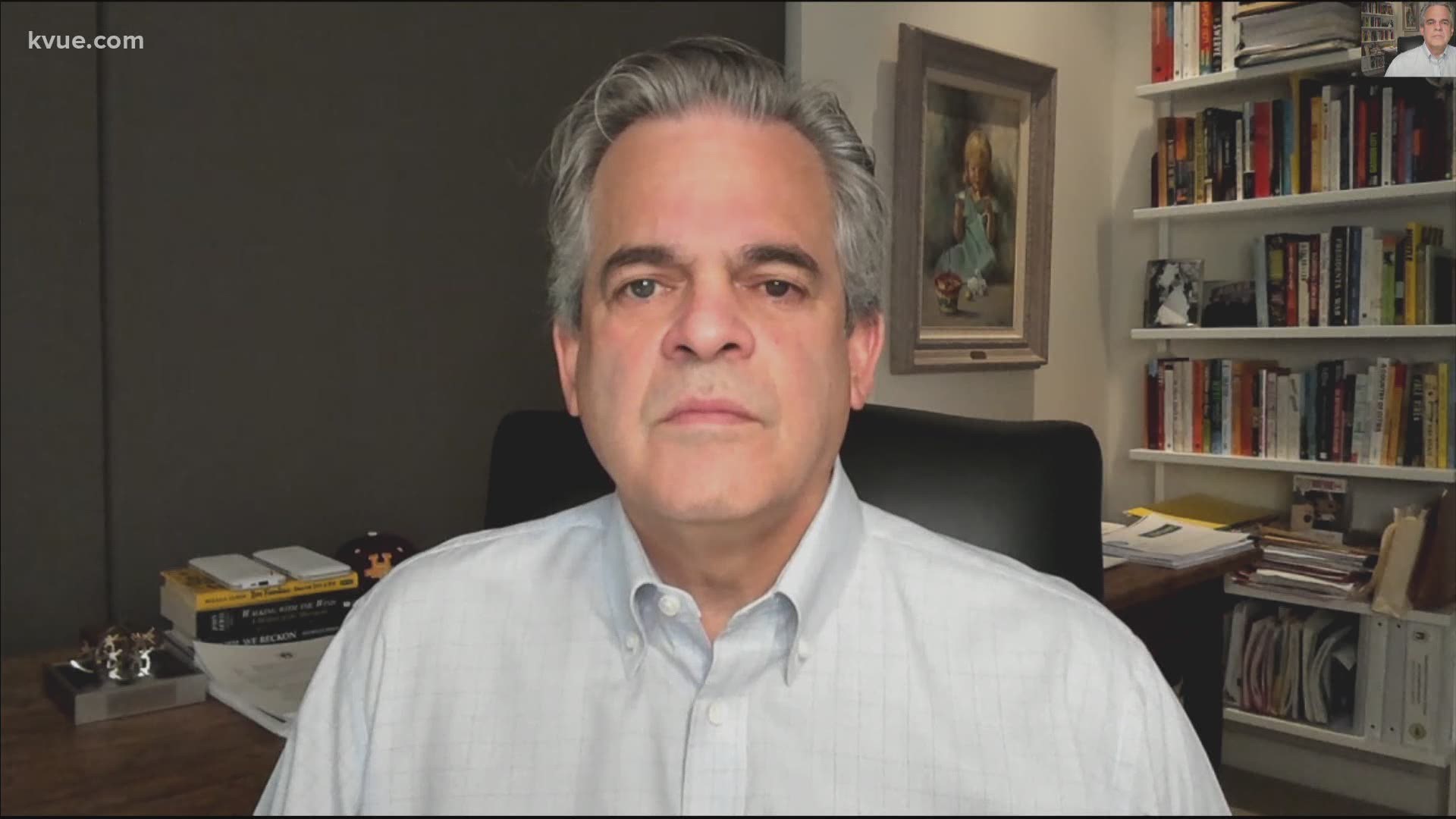 AUSTIN, Texas — The restructuring of the Austin Police Department continues to be a controversial topic in the City and on the State level.

On Friday, the KVUE Defenders found out how Austin Police Chief Brian Manley plans to disband or scale back some specialized units. It's in response to the Austin City Council's decision to cut $150 million from APD.

Austin Mayor Steve Adler joined KVUE Daybreak Monday to talk more on the budget cuts as well as the coronavirus pandemic. Here's what he told KVUE's Mike Rush in a Q&A.

Question: Chief Manley said that he needs to put some of these cops who are in those specialized units back on the street patrol, which could mean, he said, disbanding park police, cutting a DWI task force in half and maybe even dissolving a gang unit. That's a scary thought for people to hear. How do you respond to that?

Mayor Adler's response: Well, I think the first thing is to make sure that everyone knows we're not going to do anything to compromise public safety in this city. We're one of the safest big cities in the country. We have been for several years, and we're going to continue to be that way. But that means that we have to always be looking forward. The police chief has floated a draft plan. The city manager tells me it's just that a draft plan. I don't know that the ultimate plan will be but it will look like we set up a process to take a look at public safety generally. Policing is one part of that. It's a really important part of that. Our police do so many wonderful jobs in this city, an important job. But we're going to go through that process and take a look at what is the best way to make sure that we maintain the highest levels of public safety. And one of the things that the manager will be looking at is that draft plan.

Question: So, as you say, it is a draft. So it's not etched in stone right now. But the fact of the matter is the budget does get rid of 150 now unfilled police positions. It also cancels three cadet classes and it cuts overtime. So what is the balance? How do you maintain that public safety without purging some of those very important units that we spoke of?

Mayor Adler's response: Well, I think in part you maintain flexibility and the ability to do different things. The budget that we passed did remove 150 positions, but they were all unfilled positions. No officers are losing their job. No officer on the force right now is being taken off. There was about an $11 million overtime budget. It's going to go down this year by about a little over $1 million. But the provisions that we had allowed the manager to come back to the city council to say that he needed additional overtime, if that's something that he needs, that the budget that we adopted said let's not move forward with these cadet classes right now until we have a chance to really take a look at how we're doing curriculum. The police department's own review of those cadet classes said that they needed to be changed in order to be able to do a better job, and I support that. But the budget we passed allowed for us to come together and reinstall some of those cadet classes if we can get the curriculum done and if it's something that we need to do. So we have the ability to be flexible in this process that we're in. But it means that we begin with this conversation about how we can make our cities safer.

Question: I'm sure you're aware the governor tweeted about this topic. He didn't hold back. He said, "it appears to be open season for gangs, organized crime and drunk drivers in Austin. If we have to, the State will take over law and order in Austin." And now there's even talk from a former Travis County sheriff, Terry Keel, about maybe pushing a measure that would allow the State to take over some police departments in some cases. Do you have any fear that that Austin may lose control of its police force?

Mayor Adler's response: I don't think those guys know what it is that we're actually doing here. I think they may just be reading the headlines or trying to distract from the virus, which in Texas, because of the State's failure to mandate masking, has resulted in a lot of people needlessly dying. You know, I think as we get closer to November, these things are going to become more and more a political issue and there's going to be a greater, greater attempt to try to scare people. We are laser-focused on making sure that our city is safe. It is our highest and first priority. And we're going to stay focused on doing the job.

Question: You mentioned the virus. Some good news on the COVID-19 front is Austin moving down to Stage 3 from Stage 4 in the risk-based guidelines, and that's because the cases and hospitalizations are continuing to decrease. What are your concerns, if any, going into another holiday weekend, Labor Day, coming up?

Mayor Adler's response: Well, one of the things this city has done really well, because Austin does things really well, is our response to the virus, is that the community came together. We've done the things that we need to do, especially with wearing, masking and social distancing. Our city has worked really well in that regard relative to other cities around Texas and around the country. I am concerned as we move into a Labor Day weekend that we could lose that focus. I know Memorial Day, we had a spike after that. We did not have one after July Fourth. We need to go back to our July Fourth behaviors, which means no big family picnics or neighborhood barbecues, where people are gathering without social distancing and without masking. If we maintain the discipline that we have shown, then we have the best chance of being able to sustain the opening of schools where we have the best chance of being able to sustain the further opening of businesses. But it's going to take as being just religious about wearing face coverings when you're around other people, avoiding big groups when you can, maintaining this social distancing. We can do this as a community. Most communities get to where we are right now plateau and then end up going back up again. Austin should resolve to be a city that can push through this. They can keep his foot tapping on the brakes so that we can continue to reduce infectivity in our city.