The 46-page report reviewing allegations of racism and homophobia stated there were no policy violations punishable by law.

The investigation, led by Lisa Tatum of Tatum Law Partners, was released on April 17. While the 46-page report from the investigation didn't find any policy violations to be punishable by law, it detailed a culture of sexism, racism and homophobia among APD leadership, which City officials said indicates the need for accountability and an institutional overhaul.

In a press release sent out April 20, the APA said it recognizes the report identified "several areas of concern and items for improvement" – but took issue with one particular part of the report and City leaders' response to it.

The release addressed the response to an amendment to one complaint against former APD Assistant Chief Justin Newsom that stated he was notified of the complaint prior to the investigation, allowing him to retire and receive his full pay. It has been alleged that APA President Ken Casaday informed Newson of the complaint.

In the release, the APA said in part, "The conversation regarding whether or not APA President Casaday can or should be punished for having a conversation with a dues-paying member is laughable. It is asinine that our sitting councilmembers seem more interested in trying to punish an association leader than holding the chief accountable for his failure to act."

The release also stated that APD Chief Brian Manley could have demoted Newsom at any point he wanted to, even without cause and that "if the department wished to investigate APA President Casaday, we are still within the 180-day period to suspend him for his conversation with then Asst. Chief Newsom. We do, however, struggle to find a relevant general order that prohibits conversations between an association member and the association president."

You can read the APA's full release below: 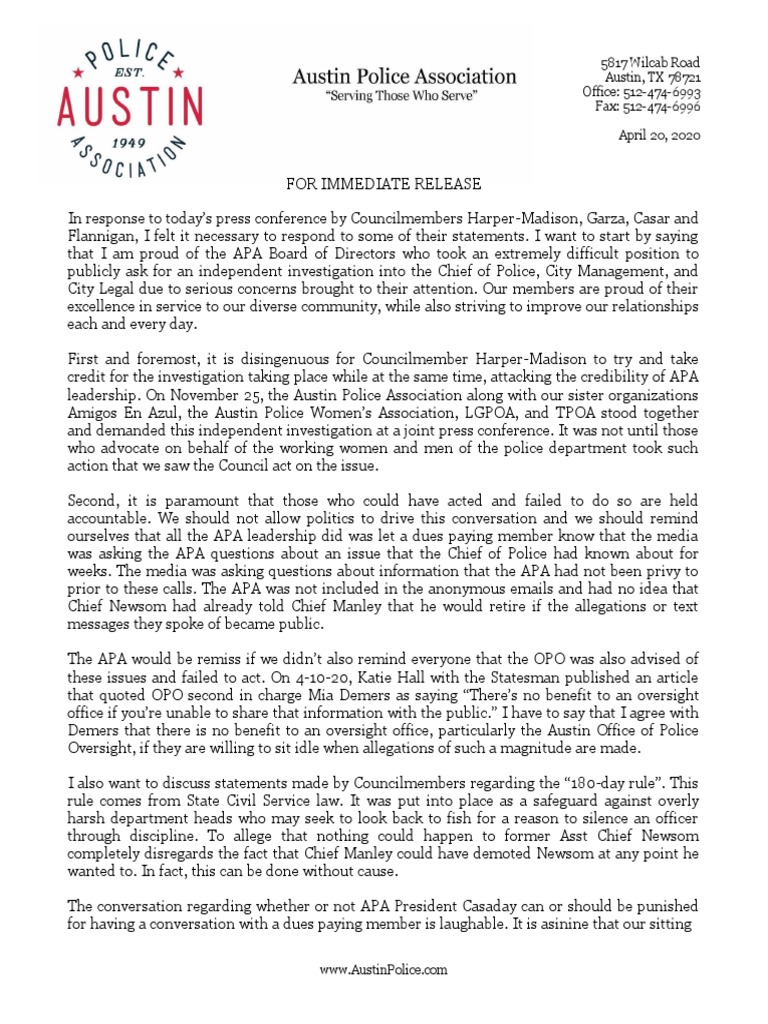 Austin Police Association responds to investigation report, City officials | Social Institutions | Society
Austin, TX 78721 Office: 512-474-6993 Fax: 512-474-6996 Flannigan, I felt it necessary to respond to some of their statements. I want to start by sayingthat I am proud of the APA Board of Directors who took an extremely difficult position topublicly ask for an independent investigation into the Chief of Police, City Management, andCity Legal due to serious concerns brought to their attention.

Also in the release, the APA addressed whether the investigation's findings should hinder further recruitment by APD. At the press conference on April 20, Mayor Pro Tem Delia Garza said the department should refrain from hiring new employees until the current leadership addresses the issues outlined in the report and makes necessary changes. But APA said the investigation did not substantiate any allegations of racial discrimination or misconduct related to recruitment, hiring or training.

"There is nothing in the report to substantiate the need for a knee-jerk, politically motivated decision to cancel or delay the hiring of new employees into the Austin Police Department," APA said.