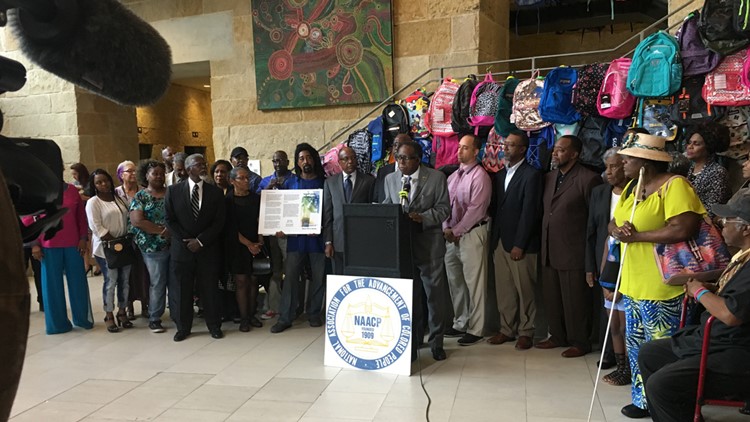 Austin NAACP to investigate city amid allegations of discrimination

AUSTIN — Amid allegations that the City of Austin discriminates against black employees, Austin's NAACP announced an investigation Thursday.

Linder said "we will also investigate policies that have displaced African Americans by ignoring necessary infrastructure investment in zip codes with Black residents."

"These policies have a historical basis and continue to have a disparate impact as evidenced by the city’s refusal to fulfill its commitment to the African American Quality of Life Initiative and African American Resource Advisory Commission," Linder said in the statement.

NCAAP held a press conference at Austin City Hall on Aug. 9 to announce the investigation.

KVUE reached out to the city in regard to NCAAP's allegations and were given the following statement from City Manager Spencer Cronk:

"I came to Austin knowing of the deep history of racial inequity. It’s something that we’ve only begun to unpack and address head-on. I also know that time is of the essence, and am committed to ensure that our efforts are relevant, meaningful and sustained over time. I believe that the way we’ve realigned our budget to address quality of life recommendations is a step in the right direction, but know that the crucial conversations need to continue both inside the organization and with our community leaders.

From the beginning, I’ve said that we need to amplify the voices of those who may feel unheard or marginalized in Austin. It’s the only path to making Austin the equitable and welcoming city that our Council envisions.”