The City of Austin is partnering with the Sustainable Food Center, Farmshare Austin and GAVA (Go Austin!/Vamos Austin!) to bring fresh fruits and vegetables to communities that don't have access to fresh, affordable produce. 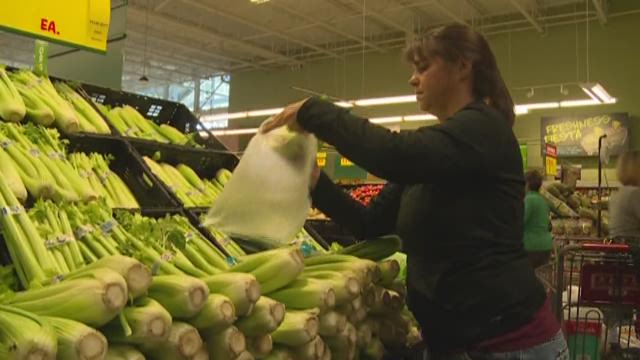 Hopping in the car, driving to the grocery store and buying fresh fruits and vegetables are actions many people take for granted. Not everyone in Austin has the opportunity.

"I can't go into grocery stores," said Andrea Martinez, who is autistic.

The hustle and bustle of a grocery store is overwhelming, but Friday morning Andrea discovered an alternative -- the Fresh for Less Mobile Market that's set up outside of the Central Health Southeast Health & Wellness Center.

"Amazing! Because I came in for my doctor's appointment and it's right there," she said.

The selection of organic pantry goods and produce from local farms can be purchased for wholesale prices, giving people access to foods that aren't readily available near their homes.

Michelle Sirles is one of those people. She lives in Elgin but works at the health center. When the market comes around, she shops for her family.

"The things nowadays in the supermarkets aren't really fresh, fresh. They have chemicals and stuff. And I just believe the freshest they can get from the farms, it would be better for them health-wise," said Sirels.

The markets are an initiative by the City of Austin and its partners to bring healthy options to food deserts which are defined by the USDA as low-income areas where 33-percent of the population is more than one mile away from the nearest supermarket.

"What we're doing in Austin is looking into other variables and other factors that might influence people's ability to access and afford nutritious food such as vehicle ownership, education, housing, health indicators," said Sarah Axe, the Food Access Program Coordinator, City of Austin's Public Health Department.

For the past year, the city has set up mobile markets in the communities that need them in places people already go such as schools and churches. The overall goal is to give people access to healthier foods so they can live healthier lives.

Below is the fall schedule of Fresh for Less locations:

Fresh for Less Schedule by kvuenews on Scribd